Long before lifting was mainstream and celebrated like it is today, there were strongmen. Most of them were relegated to being circus performers, but make no mistake about it, these guys were MONSTERS.

But the craziest part about it was the fact there were no steroids, creatine, protein shakes or anything else modern lifters take today. It was nothing but pure brute strength with some old-time grit. Leave your purses at home, ladies, let’s celebrate these pioneers of getting swole. 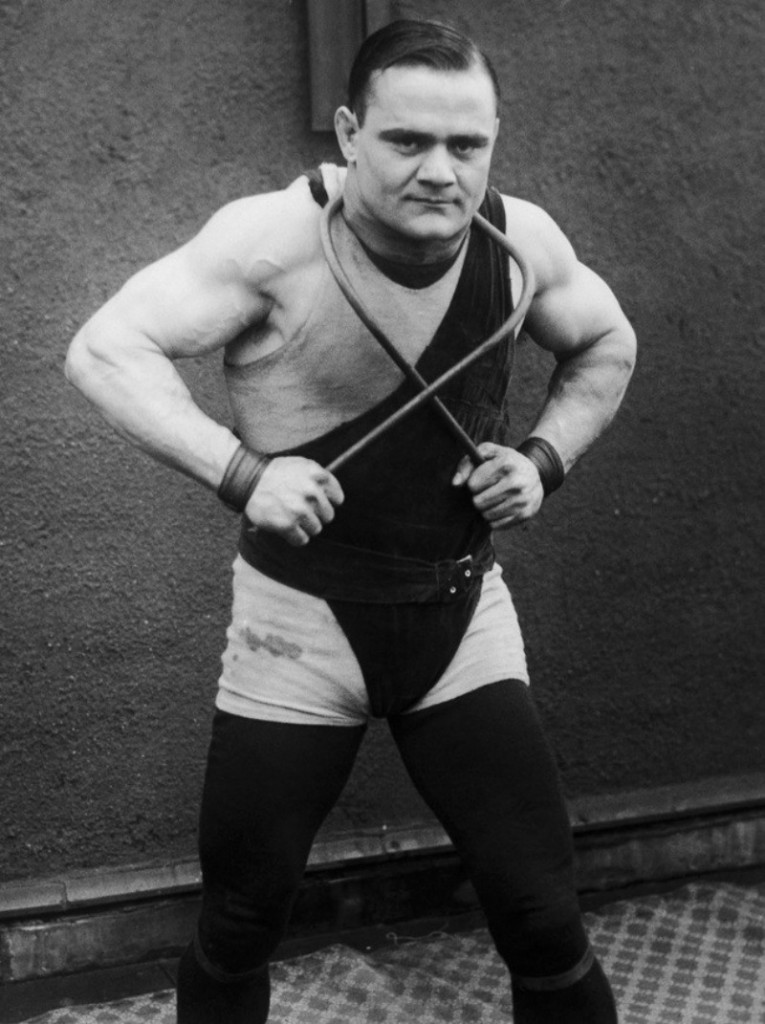 Meet Greek boxer and classic strongman Gust Lessis. This is 1925, and the dude is bending an IRON BAR around his neck! He isn’t wearing any gloves, either. And I bet he didn’t take a pre-workout. This is pure brute strength and will at its finest. Can you imagine getting into a boxing match with this dude? 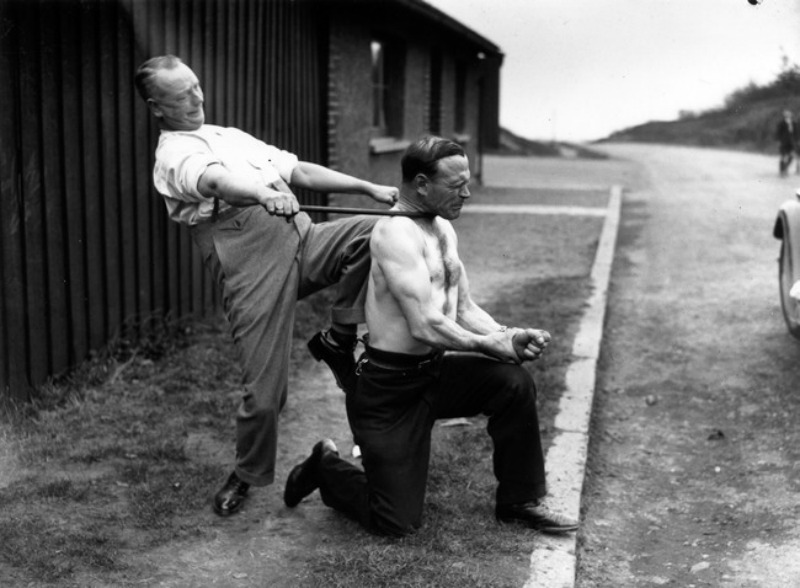 What in the hell is going on here? Is this even possible? British strongman George Challard is using nothing but his THROAT to bend an iron bar. Don’t try this at home, kids. Look at the force the other guy is using; he is digging his knee into George’s back for extra leverage. This is old-school badass right here. How many dudes nowadays can even do this? George is one tough Brit. 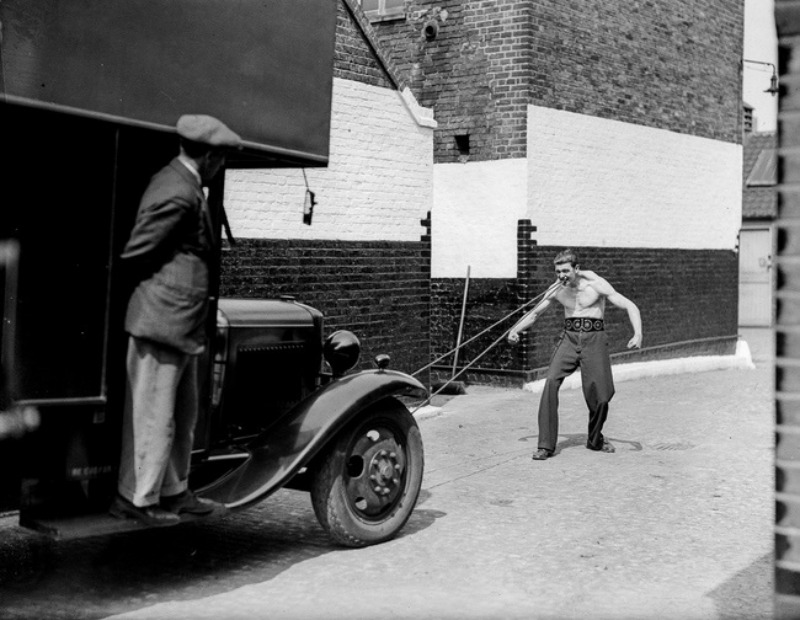 Here we see the great J Rolleano pulling a truck, plus 2 people, with his TEETH. The guy must have gone to the dentist regularly. This picture is from 1932, BUT, we have living legends still pulling this off today. 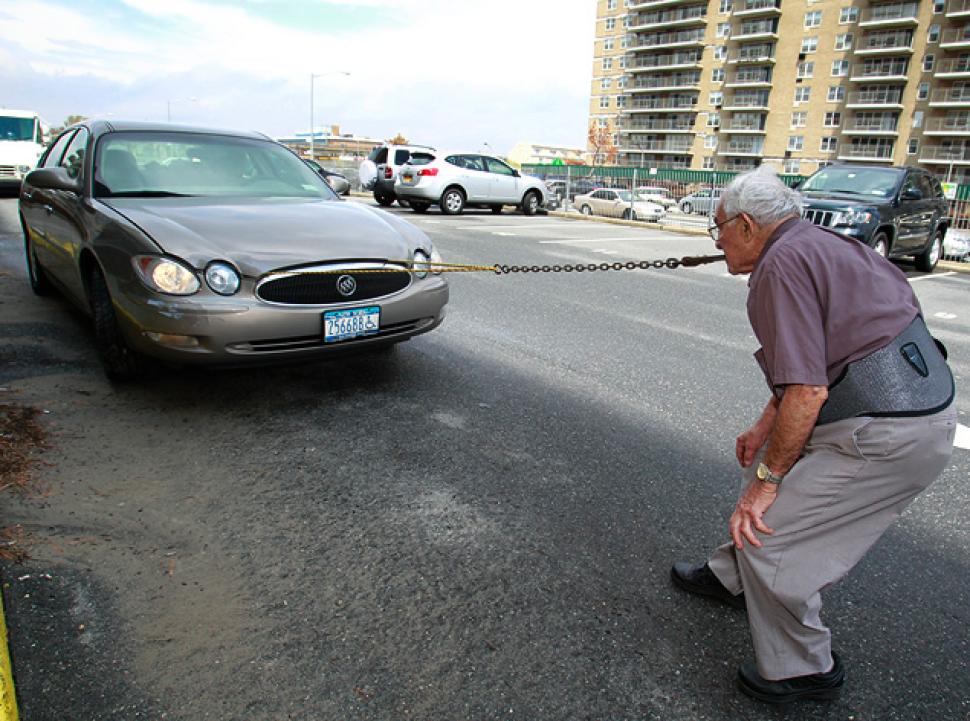 Meet 92 year old Mike “Mighty Atom Jr” Greenstein. He still pulls cars with his teeth, and his dad was one of the celebrated strongmen from the 1930’s, too. Greenstein recently appeared on the hit TV show America’s Got Talent, and of course, he was pulling heavy crap with his teeth. Rolleano and Greenstein aren’t the only dudes that can do this. 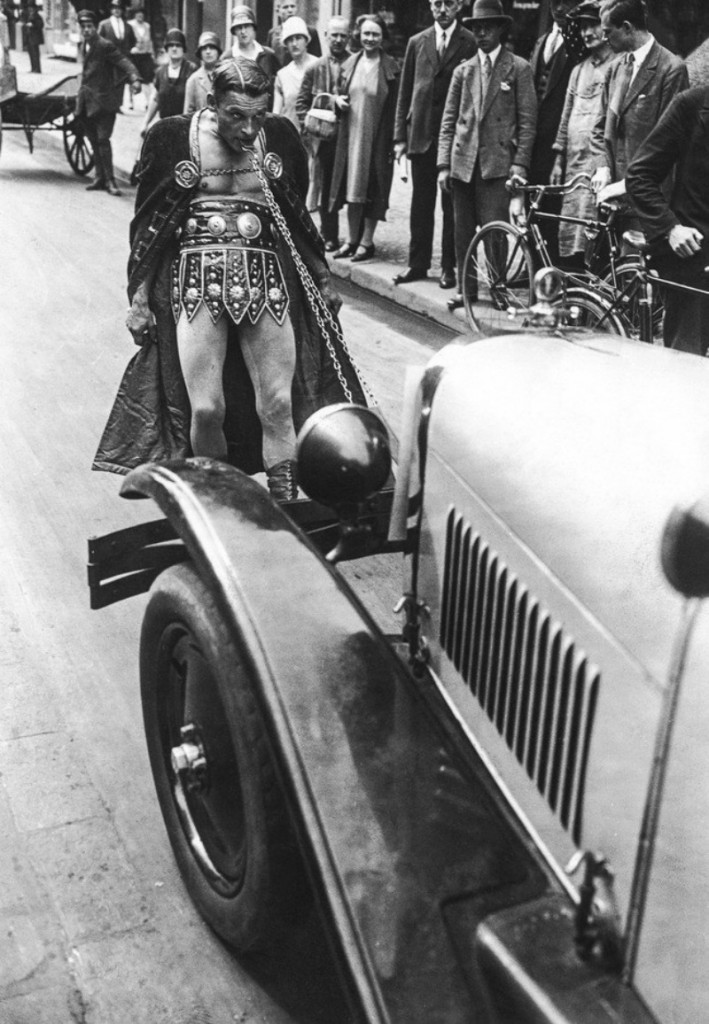 German strongman Stefan took it one step further. Here is Stefan pulling an even bigger car than Rolleano, and he is wearing some old Roman body armor! What a badass! 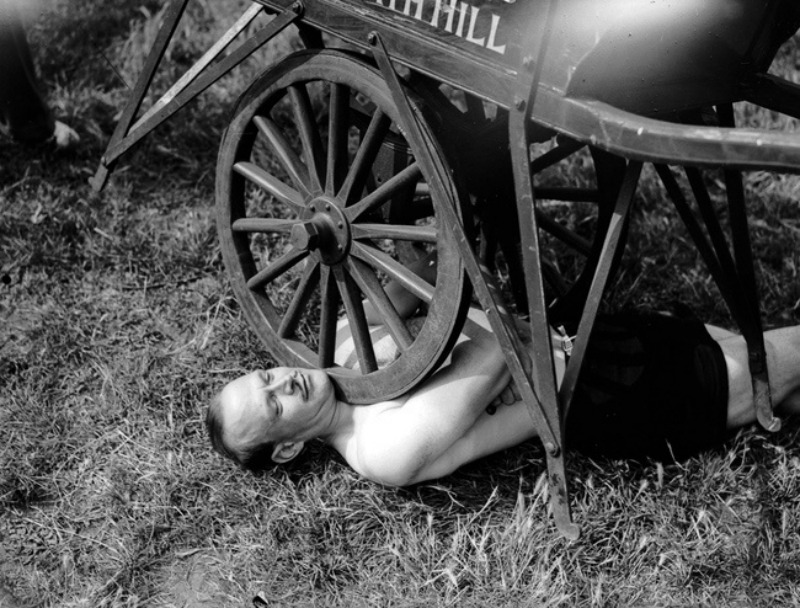 Meet Jean Challard (not related to George Challard funny enough). Jean is combining both throat strength and letting heavy sh*t run over him. I don’t know how he can even breath after this. But it runs in the family. Jean’s uncle is none other than the FOUNDER OF BODYBUILDING, Eugen Sandow! 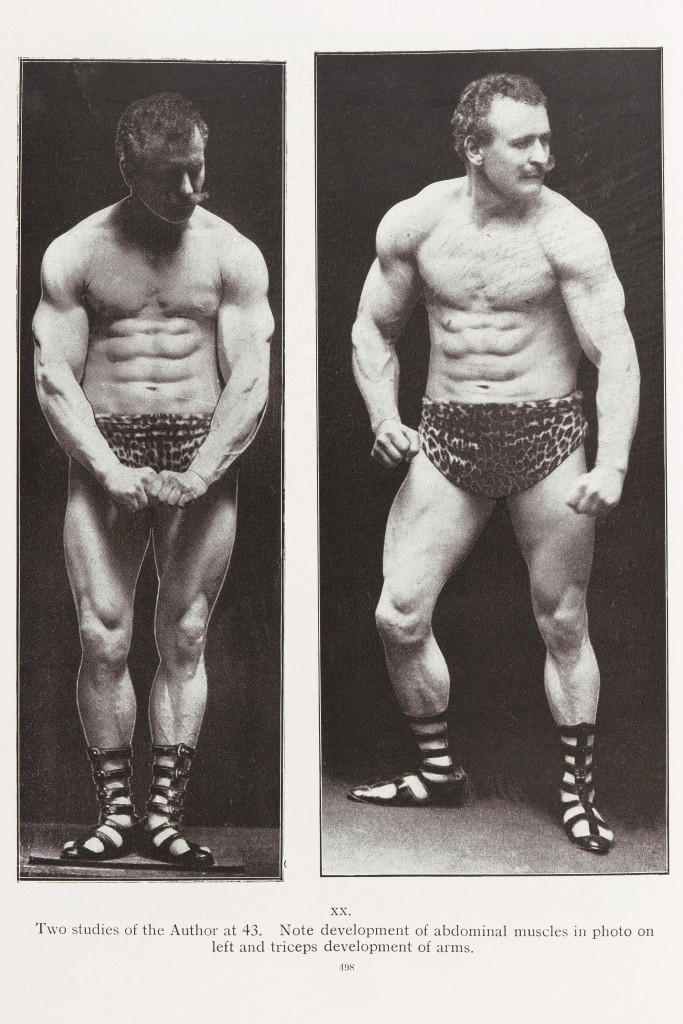 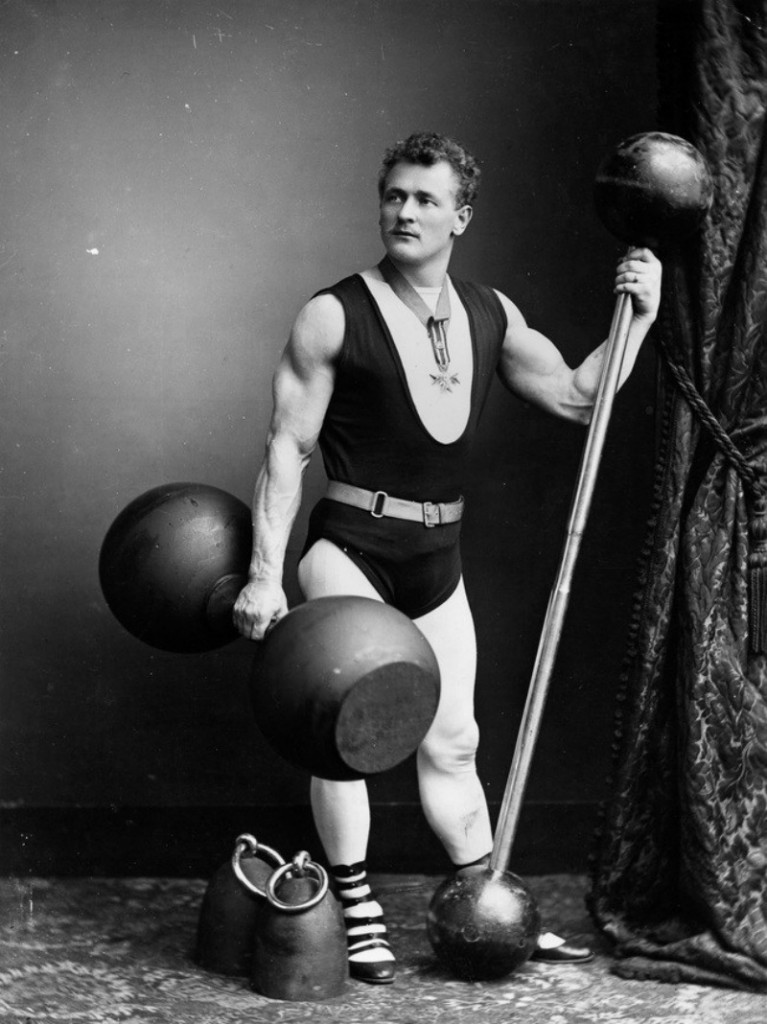 Look at the incredible physique of Eugen. This guy is a legend. No wonder Jean could be such a great strongman. Just keep in mind that all of the guys in these photos aren’t on steroids or any other supplement that modern strongmen and bodybuilders are on today. Incredible! 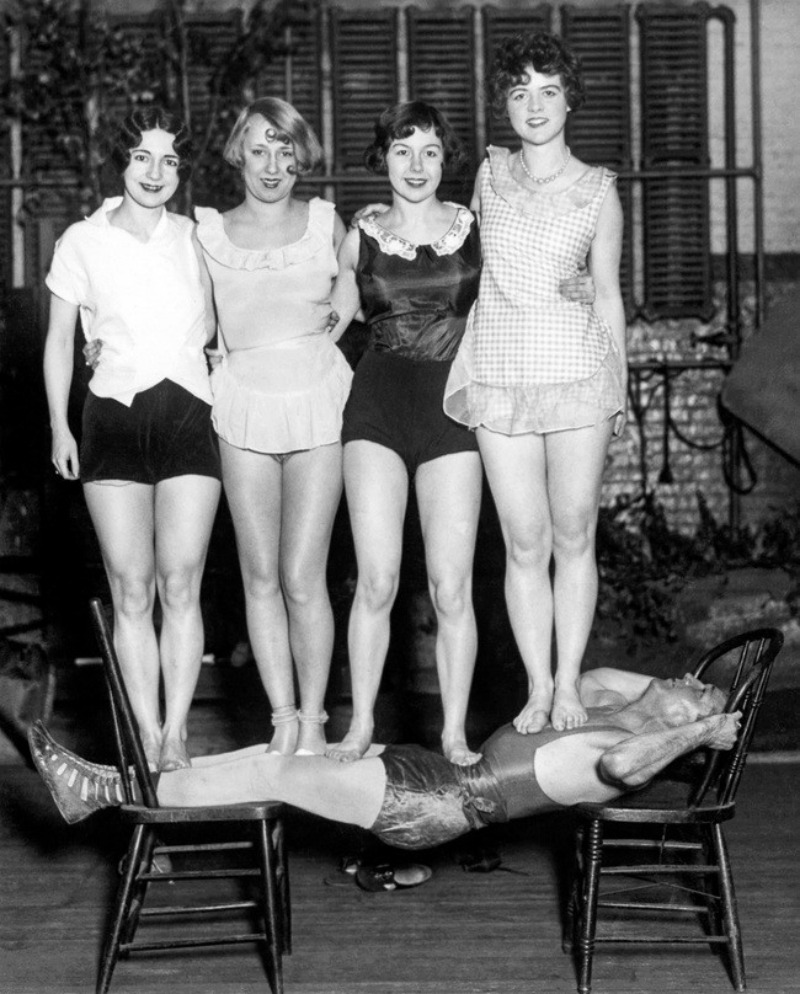 This is Edward Reece, the famous strongman and known lady killer. He is holding up 4 babes while keeping his balance at the same time. Even if each girl weighed only 115 pounds, that’s still well over 400 pounds on Edward’s body. Look at his physique. He doesn’t look humongous like modern day strongmen, yet he still has incredible strength and endurance. This photo is from 1927: 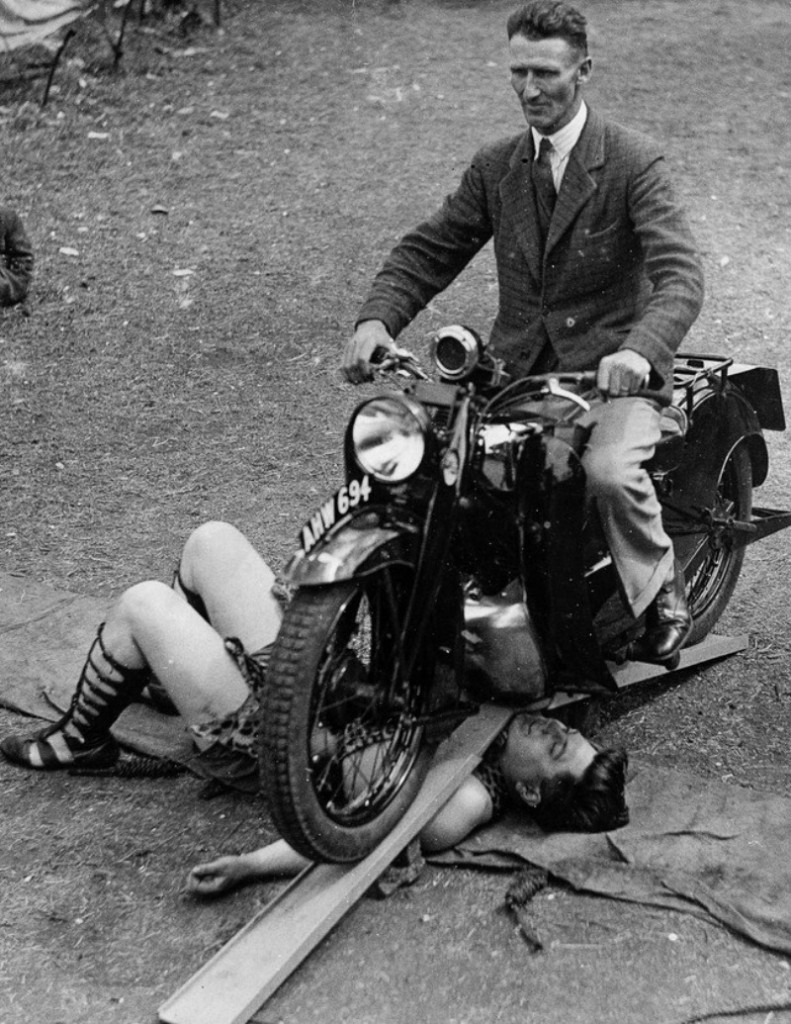 Here we see the brash Samson Brown. He is notorious for making claims about being the strongest man on the planet. It is hard to argue that fact when you see a grown man driving a motorcycle across Samson’s chest and shoulders. But look at the dude driving the bike. He is dressed in his Sunday’s best with the “no f*cks given” look on his face. Is the dude so hungover that he forgot the fact he is currently crushing a man with his bike? 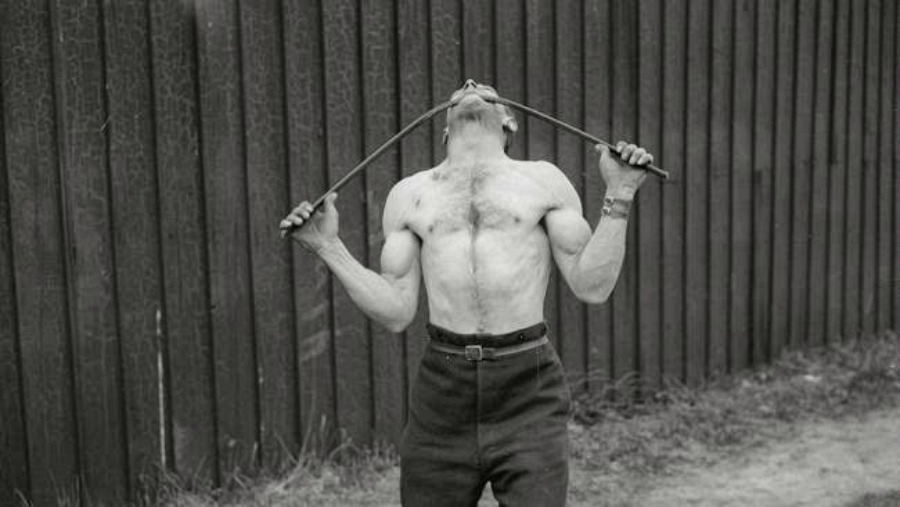 If bending an iron bar with your throat wasn’t enough, here again is George Challard bending another iron bar with his teeth. I can’t recall seeing many strongmen today doing this, let alone back in the 1930s. Would great strongmen of today like Big Z or Brian Shaw even be be able to attempt this? 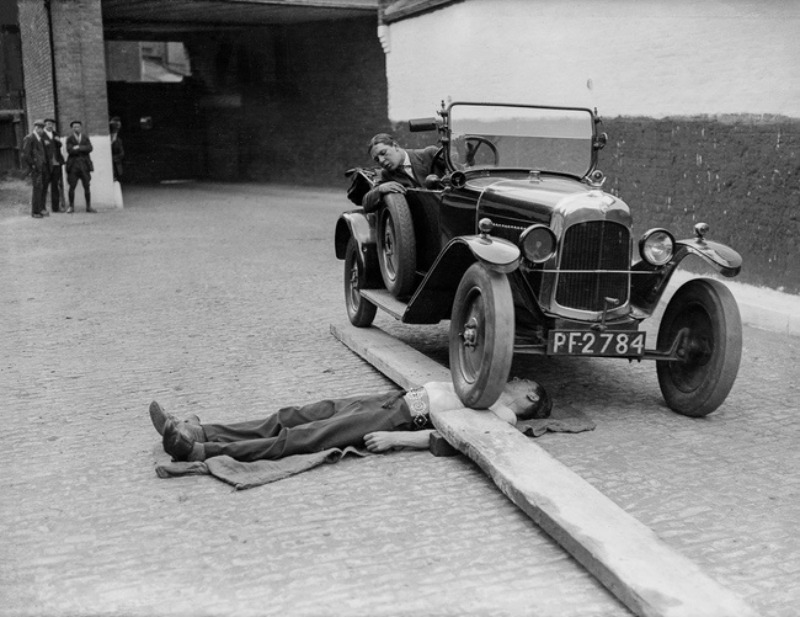 Guess who’s back, back again? It’s the great J Rolleano. Only this time, he is letting a car drive right over his torso. No shirt, no padding, no safety equipment- just balls and a high pain threshold. This was a popular stunt in 1932, and it’s safe to say a lot of guys probably got hurt. But J Rolleano was a beast, and he did this stunt many times. 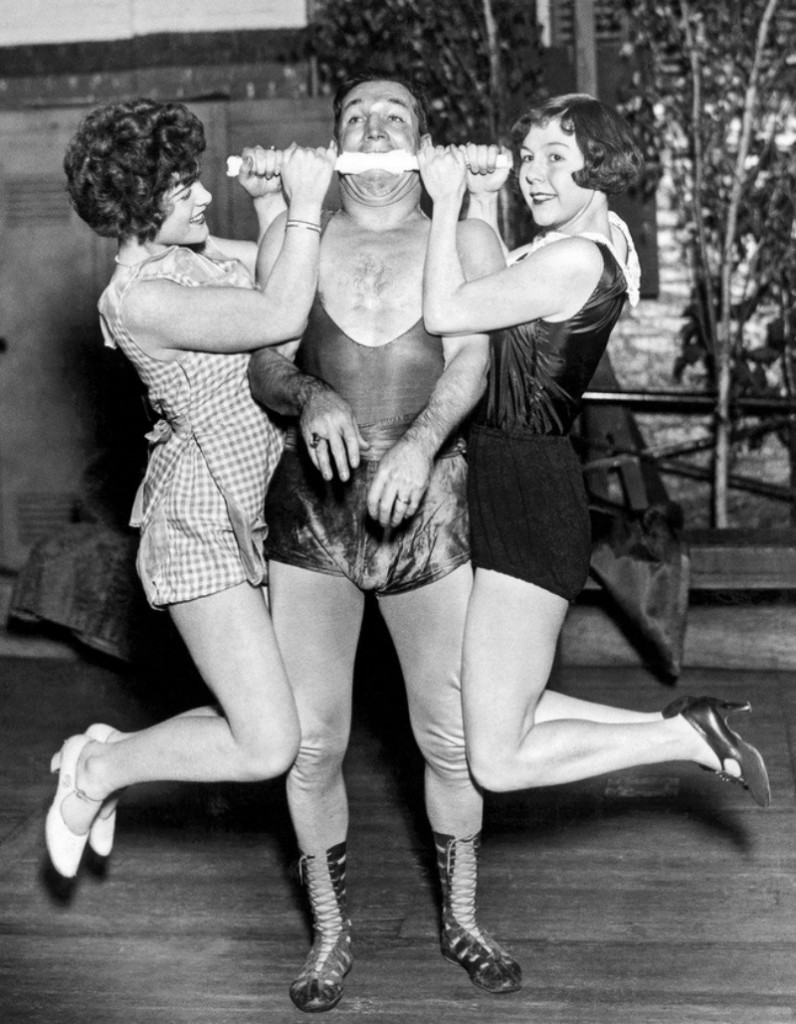 The lady killer is back. Here is Edward Reece holding up more girls, only this time he is using nothing but the strength of his teeth and jaw. This is the classic “showing off for the beauties” that we modern bros do today. One can only hope that Ed got some action after doing stunts like this. Edward Reece really was a chick magnet. 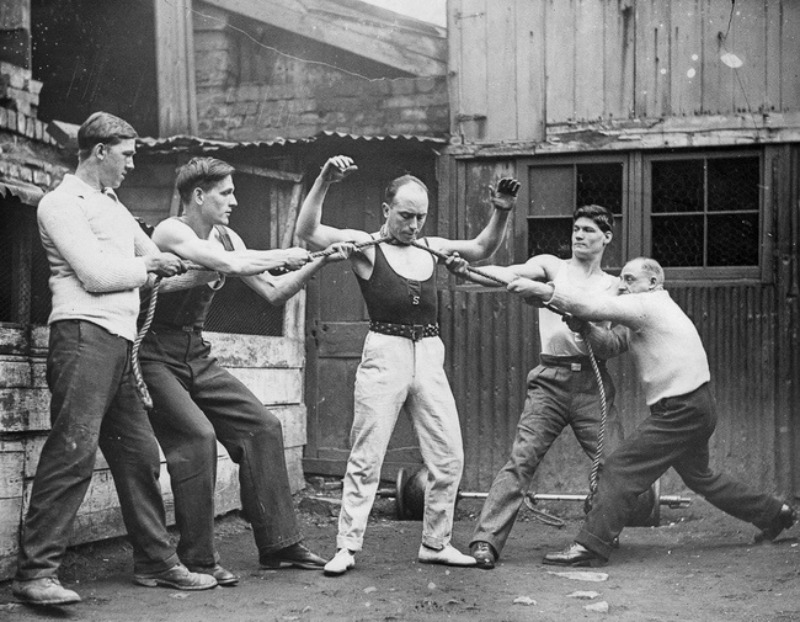 This is classic strongman and total crazy-bro Tom Joyce. Tom is letting 4 dudes choke him with a rope just to prove how strong he is. What amazes me most about this picture is Tom’s size. He isn’t even big, or noticeably cut. Yet, he is known to brag about being the strongest man in Bristol. Are you willing to get choked with a rope by 4 dudes just to prove Tom wrong? I didn’t think so. 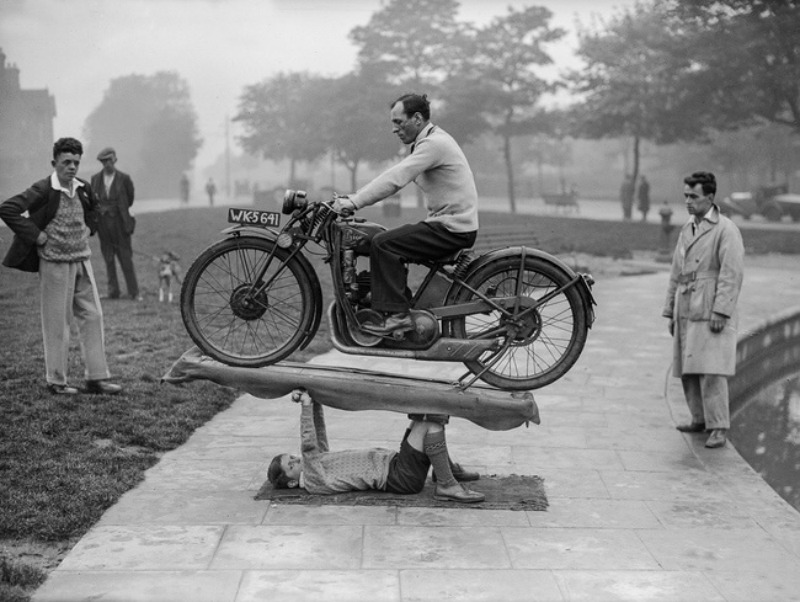 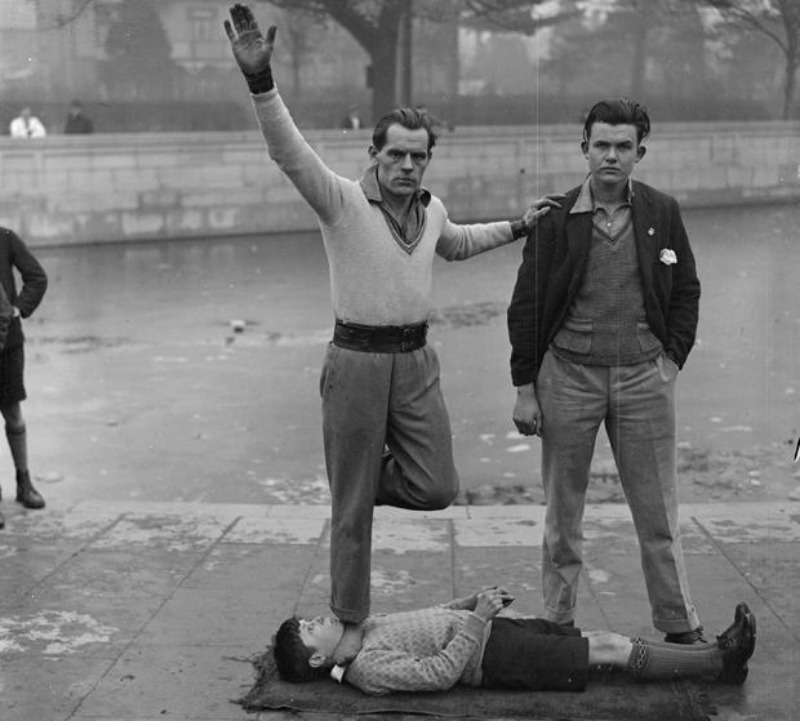 We saved the best for last. This kid is Charles Highfield aka “Boy Samson” in reference to the strongest man in the Bible. This incredible kid is holding up a motorcycle and a man using nothing but his knees and arms. How about a grown man stepping on his neck? We wouldn’t be allowed to even attempt this nowadays, but this kid was special. Show me how many 14-year-olds can do this. Boy Samson was one for the ages.

Who was your favorite old-school strongman? Would you watch if modern day lifters did stunts like this?

Top 10 Fittest Colleges in the USA

Renowned Bodybuilders Who Were Standouts at Playing Sports