Is marijuana and testosterone a bad trip for your hormones? Or will the odd bit of bud here and there leave you jacked and chilled?

With as many as 35 million Americans admitting to enjoying marijuana on a monthly basis, it makes sense to check your facts about how it affects your health and hormones.

For years, lobbyists and researchers have said that marijuana impacts your health and can lead to stoner side effects such as anxiety, paranoia, loss of reaction time and increased risk of cardiac illness.

But many bros claim that cannabis won’t do any harm and might even help you find the calm and relaxation you need after a solid session on the iron.

The big concern for those wanting to build muscle and maintain a lean physique is that marijuana is said to have several effects on the reproductive system. From low sperm quality to tanked testosterone levels.

But is this true?

Will smoking weed really lead to low test levels and huge side effects?

Let’s take a look at whether it’s all about 420 bro…. or a clear, blunt no go for marijuana and testosterone…

Marijuana comes from the hemp plant. It’s the crumbly, shredded leaves that are left after pruning, flushing, cutting and drying.

It goes by many names on the streets. From weed, pot and dope, to grass, Mary Jane and bud. Many of these names are common knowledge, and some of them are specific to different regions.

Marijuana can be used to make: 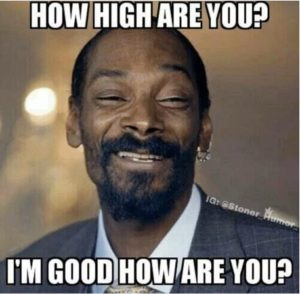 Remember that old drama teacher you had back in high school? The one who was always past the point of chilled out and wore an over-sized rainbow-colored shirt and sandals every day?

Chances are his beige, baggy trousers were made of canvas hemp too bro.

The active ingredients in cannabis

Like any natural herb, marijuana is packed with plant compounds. In fact, some studies have even called it the ‘plant of the thousand and one molecules’.

In reality though there’s probably around 480 or so bioactive chemicals that have been isolated through scientific research.

The most studied compounds in marijuana are cannabinoids, mostly because they have both pharmaceutical and psychotropic effects on human.

This is the psychoactive compound that triggers a change in your nervous system, providing that mood-altering ‘high’ bro. It binds to cannabinoid receptors in your brain, resulting in a calming, relaxing mood and an increase in appetite.

THC has been used by sufferers of Lou Gehrig’s disease and fibromyalgia, as well as those undertaking chemotherapy to treat pain. It’s also been used as a treatment for Alzheimer’s, multiple sclerosis, insomnia and pruritis too.

Without this compound we probably wouldn’t have ‘Exile on Main Street’ by the Stones or ‘Dark Side of the Moon’ by Pink Floyd… or of course ‘The Chronic’ by Dr Dre.

This compound isn’t psychoactive so doesn’t provide the high that THC does. But because of its reported anti-anxiety, anti-inflammatory anti-convulsive properties, it’s become a popular medicinal extract.

CBD has been used to treat everything from arthritis an chronic pain to mood disorders and neurodegenerative diseases such as Parkinson’s.

But don’t get carried away about CBD just yet; the science isn’t conclusive…

It’s hard not to get excited about the fantastic stories of how CBD helped someone with severe arthritis walk again, or cured some life-threatening disease.

Where there’s hope, there’s always salvation. We get that.

And there’s some fantastic evidence coming out about how some the active ingredients in cannabis help manage disease and illness.

There’s always someone happy to tell you about how CBD cured their skin complaint, fixed their diabetes or helped their leg grow back after amputation (some of the claims made online are just dumb), bear this in mind….

The science isn’t as conclusive as you might think. And CBD is still being tested for its potential medicinal properties.

For example, a huge analysis published in JAMA found that after nearly 80 individual trials had been analyzed, there was only moderate evidence to suggest that cannabinoids helped treat chronic pain, and even lower evidence to show that it helped to treat sleep disorders, nausea during chemo or weight gain during infection.

Neither does it have an effect on blood pressure or heart rate in those suffering from stroke or other haemodynamic disorders either.

Weed might help you relax after a hard day or work. It fits into your one-million miles per hour lifestyle and helps you chill out after a tough day in the office or gym.

It could even be that cannabis is the thing (and the family bag of Cheetos) that get you out of bed in the afternoon ready for a tough day playing Xbox or watching re-runs of Robot Chicken.

As you can imagine, prioritizing making sweet gains or smoking sweet sensimilla can be a tough decision for the bro that wants to optimize his hormone levels, but also enjoy a nice relaxing weed from time to time.

So, marijuana and testosterone… what’s the connection?

Because THC can raise cortisol, and cortisol lowers testosterone, there’s a theory that THC could negatively impact androgen levels.

In fact, some studies have shown that cannabis does indeed spike cortisol, but in more frequent smokers it’s doesn’t have the same effect.

On top of that, it’s also been suggested that as an endocrine disruptor, THC might lower testosterone levels by blocking GnRH release from the hypothalamus (GnRH triggers luteinizing hormone which in turn stimulates T release from the testes).

But practically all studies showing this have been from in-vitro or animal research (from a petri dish).

And that makes it hard to conclude anything without real human studies.

The research: marijuana and testosterone

The first clinical look into marijuana and testosterone was in the 1970s – a time when spirits were free and your grandparents were probably as high as a Playboy model’s tiddies.

In that first study, heavy weed users reported T levels that were a rock bottom ~416 ng.dL, while non-users were rocking in at a ball-busting, muscle-bound ~742 ng.dL.

It was obvious from those results that marijuana lowers testosterone. But this was one of only a couple of decent research papers.

But there are more studies providing similar results. 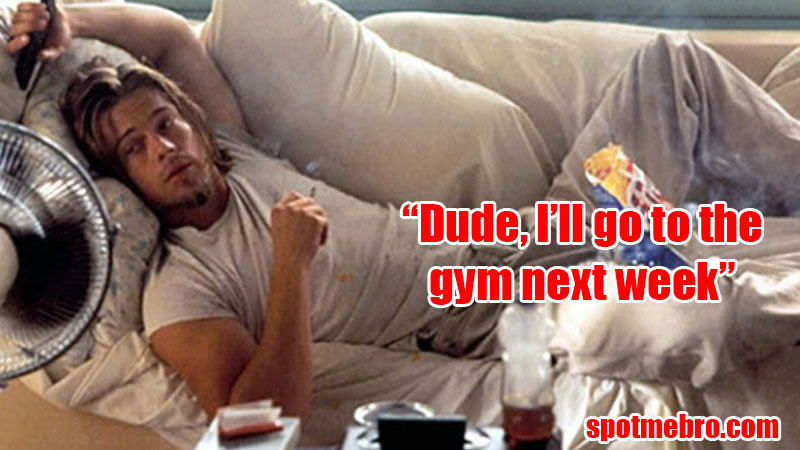 In one study, a group of 27 (probably pretty eager to help) men aged 21-26 were asked to get high every day for 3 weeks.

That’s one study SpotMeBro would definitely help out with!

The scientists wanted to see how dope affected their hormones.

Results were surprising – no significant changes in plasma testosterone were seen at all, even with the overly-eager participants that chose to toke on 54 weed cigarettes over the 21-day period.

In a similar study, ‘reproductive and stress hormones’ were measured in a group of nearly 150 men and women who smoked marijuana:

There were no differences between any groups for marijuana and testosterone, luteinizing hormone or follicle stimulating hormone – even when compared to non-smokers.

Does marijuana stunt growth or lead to man boobs?

Another reason gym rats avoid the devil’s cabbage is for fear of bitch tiddies. Or gynecomastia as it’s known in the research.

There’s only been a couple of case studies showing a tentative link between marijuana and man boobs. But like any discerning bro, that’ll still ring alarm bells. There’s no way will you look your best with your girls’ sports bra on at the gym.

In 2013, another wave of news articles surfaced that tried to make the link between toke and tits. It was based off a test tube study suggesting weed might bind to estrogen receptors and make them more active.

And we know how the news likes to sensationalize things.

To date, only one human trial has tested marijuana use and man boobs. And it was on US soldiers back in the 1970s.

They found no difference in symptoms of gyno in cannabis users or non-users, stating “our epidemiologic evidence does not support the previously reported relationship between chronic cannabis use and gynecomastia”.

So there you have it. No need to worry.

If you weigh up the evidence, the odd one or two evenings sat smoking weed listening to Pink Floyd won’t do you any harm. It helps you relax, recover and enjoy yourself.

Who knows, maybe it’ll trigger your creative side and transform you into a jacked poet or muscle-bound artist.

Even if testosterone levels decrease slightly while smoking, it wouldn’t be for long enough to have a significantly negative effect.

But if you’re a live-with-your-mom-in-the-basement kind of dude and have a serious weed issue, you’re running the risk of long-term low T… but that’s probably the least of your worries if that’s the case.

Want more? Check out our Best Testosterone Booster Supplements page and cast all your fear about low T levels!

This doesn’t need to happen to you! 😉