If there’s one thing Rich Piana knew, it was how to rear vascular and venomous pythons. His colossal arms were what set him apart from the rest, alongside awesome tattoos and a badass attitude.

Rich also preached the 5% philosophy to all who would listen. As he said, these were the lifters grabbing life by the balls, doing everything it took to make their dreams a reality.

Are you ready to join the 5%, bro? If so, it’ll take nothing but hard work and outright dedication to get you there. Oh, and maybe an insane passion for lifting.

Before he died, Rich Piana told interviewers he lived for bodybuilding, and would ultimately die for it too. That’s what made him part of the fearless few, the ones who dared to follow a path towards greatness.

Don’t believe us? Try to recall the last time you ever heard of mere mortals training arms for eight hours in one single day! Rich Piana did it over twelve times in his incredible career.

If you’re ready to join the 5% and build bursting biceps and t-shirt tearing triceps, then look no further. This is the only arms workout you’ll ever need.

SpotMeBro’s dedicated team of trainers researched Rich Piana’s favorite burn-inducing moves. Now, all you need to do is put up or shut up punk.

Rich always said he chased the pump above anything else. If you’re as serious a bodybuilder as you say you are, you’ll know what he means.

That’s why in true Rich Piana style we’re embracing the powerful potential of supersets. Challenging both the agonist and antagonist, back-to-back until they scream.

If you’re a pussy – don’t even look at this routine. Dare to try it, and you’ll be eaten alive by all the real bros who can handle the fire. You have been warned. 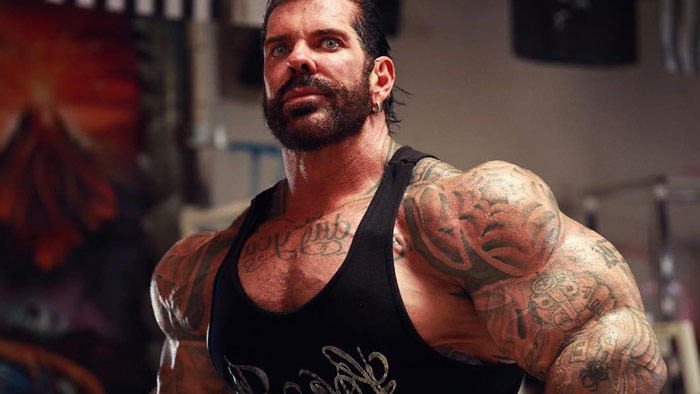 Exercises are split into pairs to create badass supersets. So that means sets are to be completed one after the other with minimal rest. (Again, don’t be a p*ssy!)

For example; absolutely destroy exercise 1a. And before bending over to catch your breath, pick up a pair of DBs and hit those hammer curls for 1b. Then, and only then, do you get your 45 seconds to rest.

If you’re wondering what the hell is up with the changing rep range then let us explain. It has been used and abused by Rich himself for years upon years and who are we to argue?

He openly said he never cared too much about reps and always gauged his work by feeling the burn. But, as our team of trainers has confirmed, he’s always in hypertrophy territory for creating monster growth. 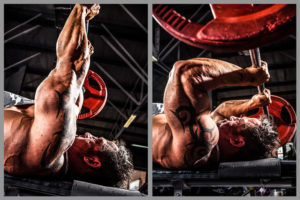 [infobox] Get yourself a spotter for these, bro. They’re called Skull Crushers for a reason. [/infobox] 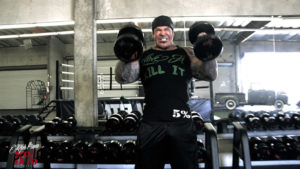 One exercise the late great said every single deadly python rearing bro needs to train, is the hammer curl.

Rich himself told interviewers he never hit any arm day without them – they were his go-to lift for increasing pump and size.

They’re awesome at targeting the brachialis. Which, if you haven’t heard bro, is “the” deep muscle residing under the biceps brachii. It’s this baby, that when developed, makes arms appear thicker and meatier from all angles.

[infobox] Tip: Yeah, asking for someone to spot you might be ego-shattering. But it ain’t half as bad as needing to be rescued from under the bar. Grab your best hypeman and get him to keep you safe with this one. [/infobox] 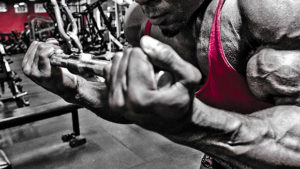 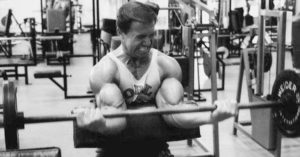 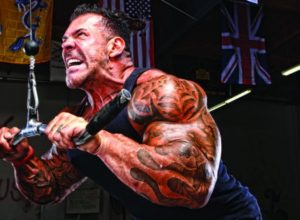 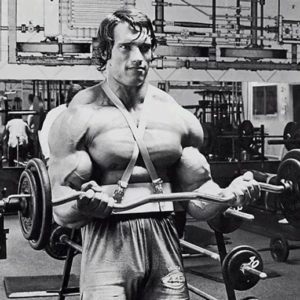 No arms workout could be complete without a set of this iconic movement.

As bros we know it’s all about curls for the girls. Why’d you think Arnie did so many? He knew what was up…

They’re one of the most effective bicep bulging techniques there is. Plus, they’re also the nemesis of narrow shirt sleeves worldwide.

Here’s how to do them:

At this point, you should have the sickest pump you’ve ever experienced.

Your pythons will be vascular like you could never imagine. The burn will feel as if Satan himself possessed your body and stole it to blast out ten thousand push-ups in the fiery pits of hell.

Welcome to the b*tches love colossal biceps club, bro! You’ll be treated like a king around here. Every single inch added to those ‘ceps guarantees you ten more beautiful ladies.

Didn’t complete it? Better luck next time weakling. Close the door on the way out if you’re even strong enough… 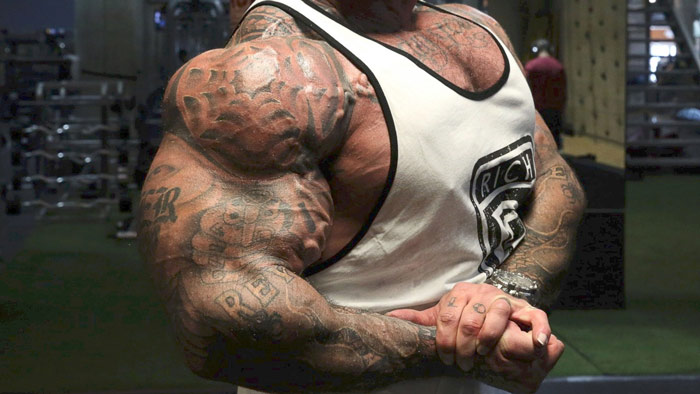 Smash every tricep exercise, and then without stopping, burn straight through the following bicep beasting. Welcome to the deadly yet Rich Piana pump approved world of supersets.

To be more precise, this style of working out is known as agonist-antagonist superset training. An arm annihilating method made popular by Arnold Schwarzenegger back in the 70s, and still used by elite bodybuilders today.

Benefits of supersets include:

The underpinning idea is to train one group and instantly switch to attacking the opposing muscles. This could be triceps to biceps, or simply chest to back (as Arnie did).

So not only are you fitting more metabolic stress into a smaller timeframe, you’re getting strong AF too. You’re strengthening the agonist and instantly paying attention to the opposing agonist. Something often missed by inexperienced or lazy gym rats.

Also, let’s not forget about creating a balanced muscular physique, which is important for any aspiring bodybuilder. More specifically for us Piana worshipers, a balance of might on both sides of the arm.

To achieve the ultimate goal of guns far beyond the average gym bros AK47s, we need both sides to be equally as massive and destructive. Supersets facilitate this alpha sh*t, so embrace the burn. 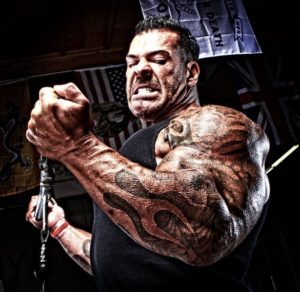 Forging bulging muscular armor like that covering Rich Piana’s arms is not something that happens overnight.

No way, bro! There’s simply no substitute for an entire lifetime spent earning the right to bear godlike growth.

Rich was raised amongst strong and powerful people since birth. So it was inevitable that he would become fixated on the limitless potential of the human form.

As a child, Rich witnessed his mother sculpting and shaping her physique whilst preparing for bodybuilding contests. She and Bill Cambra, an old-school style competitor, would heavily influence the young star by exposing him to their lifting lifestyle.

It was at the age of six he began obsessing over the sport, and five years later began training to become a future champion. Then, at the age of 15, Rich would enter his first ever competition and set the ball rolling on a future lifelong career.

Piana won copious bodybuilding titles as a teenager before becoming the IFBB Mr. Teen California at in 1989. After winning this award at just 18, he would then continue to lay out his legacy over 25 years. Filling it with professional competition, entrepreneurship and inspiring the next generation of 5%ers.

Stroke Your Way to Gains - Is Swimming Good for Bodybuilding?