It’s the greatest sport in the world. But if you don’t understand the different bodybuilding categories and divisions, you’ll not fully appreciate the art and science of ehat it means to stand on stage at competition.

When you think of a bodybuilder, you might conjure up ideas of chiseled abs, jacked muscle, a dark tan and a fluid posing routine.

And you’d be right.

But there’s a lot going off at your typical bodybuilding meet that you might not know about yet.

And while noobs might think it’s just a load of guys stood on stage posing, there’s actually a hell of a lot of categories and divisions in bodybuilding.

If you’re wanting to compete in your first show and don’t know where to start, or you just want to learn more about the sport of bodybuilding, here’s everything explained…

Why Compete In The First Place?

Strength training is the greatest pastime of all.

What other hobby (yeah, okay it’s more serious than just a hobby) can improve your health, build your confidence and make women weak at the knees?

You work solid in the gym, slave through blood, sweat and protein, and craft a physique that your friends tell you is worthy of the stage.

Only then are you ready to compete.

But is competing in bodybuilding even on your radar?

If you’ve got a decent physique and you’re as motivated as hell to get on that stage and show people what you’ve got, the answer is hell yes.

The benefits of competing

There’s nothing quite like the buzz you get from showing the world what you’ve sculpted over the last few weeks and months.

The adrenaline, the pump and the energy you get from your first show is just something else.

Building up to a competition means you’ll work harder than ever before, pushing past your limits with both training and nutrition to look the best you possibly can.

When the bright lights of competitive bodybuilding are set right on you it’s the greatest feeling you’ll experience.

You learn more about your body from competing than you ever would as a recreational lifter. You ramp your motivation up to 11 and learn to deal with the pitfalls and obstacles you (inevitably) hit along the way.

It’s a journey of self-discovery.

For the successful athlete there’s the potential for trophies, cash, sponsorship, free advertising, supplement deals and a boat load of other benefits too.

You can earn your pro card and go on to the big leagues.

And for those that don’t make place in their first meet, there’s the drive to do better next time.

Hell, even if you decide to never compete again, you’ll learn something about your body that not many people ever get to find out…. how far can you really push yourself.

There’s no doubt about it though.

In fact, it’s probably one of the most challenging things you could ever attempt.

But if you’ve got the balls to do it, the rewards far outweigh the hunger, pain and sacrifice you’ll have to go through to get that medal.

The purpose of bodybuilding is to craft a physique that shows muscle, shape, symmetry and balance.

No week points and no imbalances allowed.

Not enough proportion and you’ll score poorly. Bring too much body fat to the stage and you’ll end up so low on the score sheet you’ll wonder why you bothered.

The two main categories in men’s bodybuilding are natural (known as ‘natty’ which means it’s drug free) and open (untested).

And from there are various divisions and sub-categories of competition, each with their own rules and regulations. 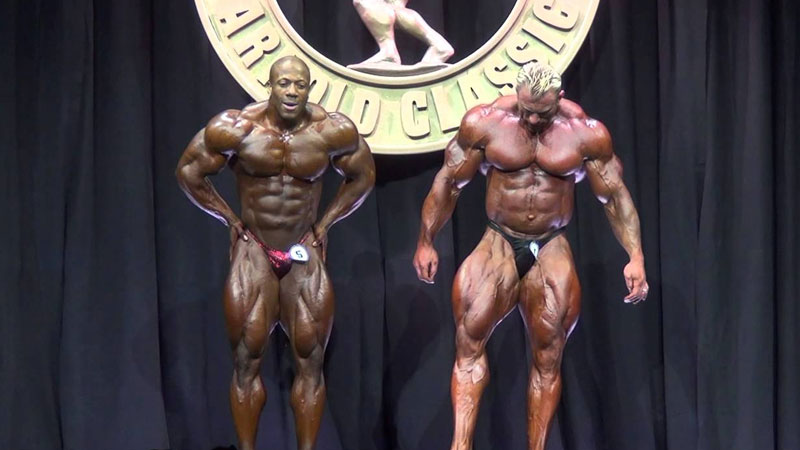 Dating back to the 1930s, this is the traditional competition where guys are judged on the amount of mass, definition and symmetry they bring to the stage.

It’s open and untested. You can’t be ‘too muscular’ or too big in this division.

The suit for this division is posing trunks.

Competitors are placed in one of six weight categories (for example lightweights are between 143.25-154.25 lbs and super heavyweights are over 22.5.25 lbs).

Each of the men have to go through a number of different mandatory poses so that muscle quality can be judged fully.

And a second round of posing sees the athlete performing their own posing routine for a maximum of 90 seconds to music of their choice.

The idea of this routine is to showcase conditioning, muscle mass and symmetry.

There are a number of bodybuilding subcategories too, such as ultra masters for 60-69 year old men, 40-49 year old masters and juniors at 20-23 years. 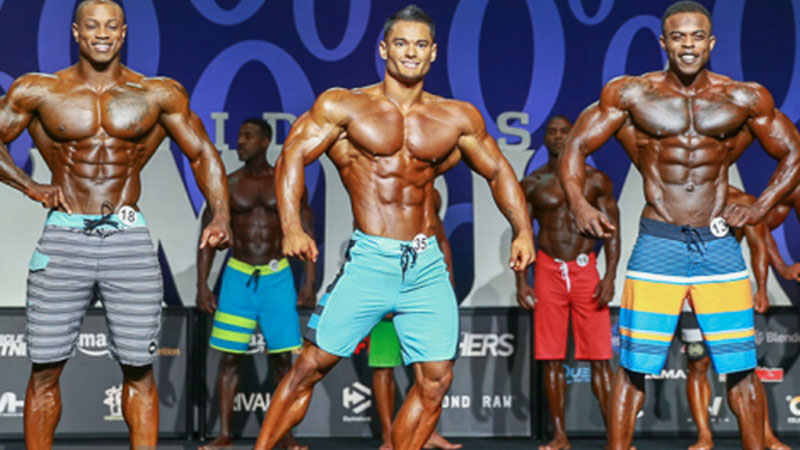 This relatively new kid on the block was introduced in 2012 as a way of combining the muscular, lean look with athleticism and overall aesthetics.

It was designed to help bodybuilding return to the ‘golden era’ where symmetry and proportion were more important than huge, monstrous amounts of mass.

Men’s physique is the one where you see guys in board shorts. Leg mass isn’t a factor – it’s all about the upper body.

Athletes are split into categories based on their height.

You can actually be marked down for being too jacked in men’s physique, as the emphasis is on the ‘total package’ instead. This means it’s just as much about conditioning and stage presence than slabs of muscle mass.

Judging sees each athlete go through posing on their own (presentation round) and then a group pose down at the end.

This is where competitors work hard to intimidate their fellow athletes with their physique, outshine everyone else on stage and present themselves as the best in front of the judges.

It’s all about swagger, confidence, experience… and an athletic, aesthetic physique. 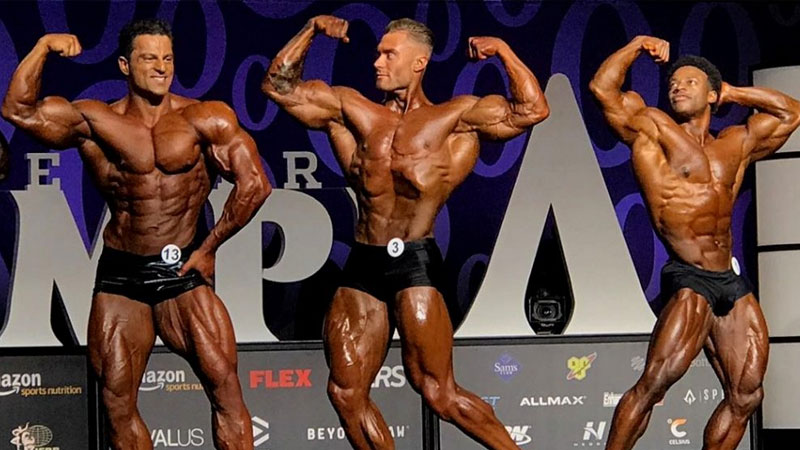 The newest category of men’s competition is called classic physique. It sits between bodybuilding and men’s physique.

In classic physique, athletes take part in two rounds. Similar to bodybuilding these include a round of mandatory poses and an individual posing round.

If you prefer more muscle, but not quite to the level of full on heavy weight bodybuilding, classic physique is your category.

The board shorts are gone for this division too, replaced by trunks or shorts.

So muscular legs are important here.

Again, athletes are categorized based on their height. And they also have to hit a target weight too (based on the height category they fall into).

The pre-determined height to weight ratios were done in an attempt to limit freakishly huge physiques for the different categories, but still allow decent mass on your frame.

Posing is similar to the bodybuilding division, but has a focus on athlete’s hitting their own favorite poses.

The world of bodybuilding is growing each year, getting more and more diverse as different divisions are created.

In the men’s groups there are a number of subcategories. Each with their own specific rules and regulations.

You can rest assured that no matter what you look like, there’s a division right there just for you (presuming you actually train and look the part).

Fish vs Chicken for Bodybuilding