The leg press is one mean piece of equipment, able to reduce a even the most confident bro to a crawling, crying shadow of himself in just a few short sets. Leg press variations are said to hit your muscles in different ways. But do they?

The squat might be the King of lower body exercises. But the leg press is definitely his army general, not afraid to wage war on your quads when the time is needed.

And with so many different leg press variations, you’re sure to find a machine that suits your own needs.

Does an adjustment in foot position really change the way in which you target your muscles? And if so, how can you program them to optimize progress and make maximal gains?

In this article, we take at different leg press machines and the varied stances you could use. It’s time to break down the science…

The Leg Press – The Secret to Tree Trunk Legs

When it comes to machines that’ve lasted the test of time, there’s no better example than the baddest leg builder of them all – the leg press.

Are you gonna craft a strong, solid pair of legs using the adductor machine? No, of course not.

Choosing the right machine makes a real difference to the way your body adapts. And it’s the leg press that should form the cornerstone of any good workout. Especially on leg day when the goal is to annihilate your lower body to within an inch of its life.

Not to use the kind of machines reserved for gym bunnies who’re working it hard to get their Insta followers past the 10k mark.

Yep. It’s all about the leg press. 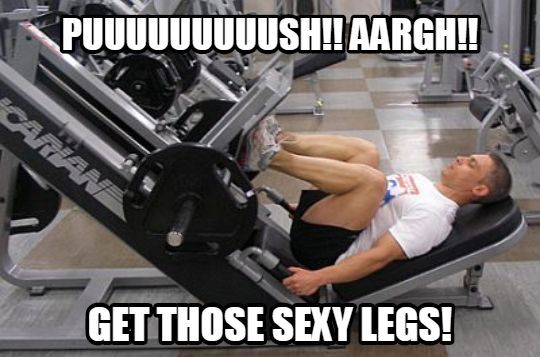 Most gyms will have a leg press machine in one form or another. And for the most part, the basics around technique and form are the same.

You adjust the load with a magnetic pin. And use the footplate to secure your feet somewhere around hip- to shoulder-width apart.

Make sure your butt, hips, lower back, and shoulders are pressed firmly into the set and your feet are flat on the plate.

Drive your heels and mid-foot into the footplate and extend your knees and hips until the point where your knees are just about to lock out. You’re aiming for full extension but avoid locking out altogether or you’ll fast become one of those sickening YouTube videos showing guys folding in half as their knees buckle under the load of the machine.

This machine emphasizes quad mass in a way that exercises like the leg extension just can’t keep up with. The range of motion also triggers some work by your glutes too – so if building dat ass is the name of the game you won’t be disappointed.

In a traditional set-up, the leg press doesn’t work the hamstrings as much as squats – which can activate hamstrings by as much as 58-71% more during squatting.

However, different foot position might target the hamstrings more than others… 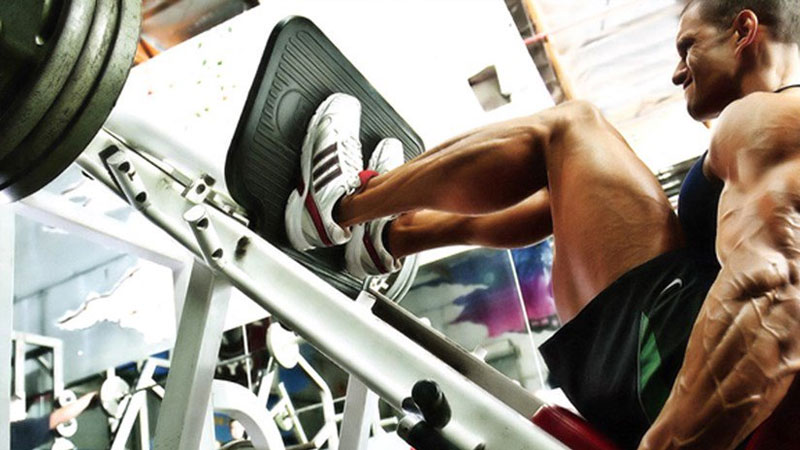 There are a number of old wives tale that’s been passed through the folklore of the iron houses over time.

That’s what you call dogmatism – you believe it because some big guy in the gym said it. And that’s not the direction you want to go if you want to build a scientific approach to getting jacked.

One thing’s for sure though; the bro’s were kind of right on one thing – altering foot position on the leg press can change the relative contributions of different muscles.

There are a number of biomechanical studies that show while changing foot position on the leg press doesn’t affect overall quadriceps activation, it can have an effect on other muscles.

Here’s what a study published in the Journal of Strength and Conditioning Research said about the effects of different positions on muscle activation.

In other words, having your feet higher on the footplate hits your ass much more than in low positions; but low positions are better for building some nice quad mass and reducing glute contribution.

But what about wide positions vs hip-width stances?

Again, there’s no difference in quad activation at all between positions, meaning narrow foot placement ‘to smash the quads’ isn’t really a thing. And the fact that narrow positions might not feel great on your knees means unless it’s calf day you can skip it altogether if you want.

If you want to build an ass that won’t quit you should go with wider leg press variations.

Stances that are double that of hip-width, guarantees much higher gluteal contributions, as well as adductors (inner thighs).

Side note: Studies on injury rates (pulled muscles etc.) show no difference between narrow and wide positions so one method isn’t ‘safer’ than the other.

Dependent on the manufacturer, the leg press comes in different designs and orientations.

Before you start to get jacked you need to know the differences between the leg press variations you might come across.

That way you can go with the variation that best suits you:

They’re different in terms of the body position, mechanics and loading. Some let you push the plate away from your body, whereas others are designed so that when you apply force to the plate, it’s you that pushed away from it.

But they’ll all set your quads alight faster than a kerosene-soaked can of body spray.

The leg press is one of the oldest and greatest machines in the gym. It comes in various designs and orientations and has stood the test of time as a true bro exercise to dice out some quad growth and build huge strength.

To get the best from your training you need to focus on choosing the right machine for you. The seated leg press is easy to set up and has an easy range of motion, whereas the sled press is trickier to organize, but has a better range of motion to light up those quads.

In terms of foot position, there isn’t that much of a change to quad activation at all. But higher or wider positions help to hit your glutes more, while low position switch on your calves.

Where next? Here are some more articles you’d like to read

A Guide to Bad Gym Etiquette: How to Not Be a Douchebag