There’s nothing more masculine than being able to smash out pull-up after pull-up. It shows you’ve got strength, agility, endurance and just godlike sex appeal. And it’s a hell of a muscle builder too.

The problem though that unless you’re the king of your own body weight and strong enough to lift your self up with good form, your pull-ups will look as coordinated as the dance floor does at the annual ataxia night out.

If you want to beat your body weight woes and perform pull-ups worthy of a calisthenics Barhero award you’re in the right place.

This is how you get better at pull-ups…

The King of Upper Body Exercises: The Pull-Up

Yeah okay, the bench press is pretty cool. And even the military press is a brutal upper body muscle developer.

But let’s cut the sh*t. Being able to rep out pull-up after pull-up will get the gym girls feeling as slimy as a month old lettuce.

You’ll have to be good at pull-ups just to stop your feet from getting soaked in ovulatory discharge.

The pull-up is an exercise that works your lats, biceps and a whole host of other muscles. It boosts strength, endurance and stamina in the upper body, hammers your trunk and core strength and even forces your glutes to fire too.

If you’re looking for an exercise that builds muscle and takes you from puny player to pussy slayer this is the one.

Motivation is the key to progression. But being a little too enthusiastic can also f*ck up your sh*t too. 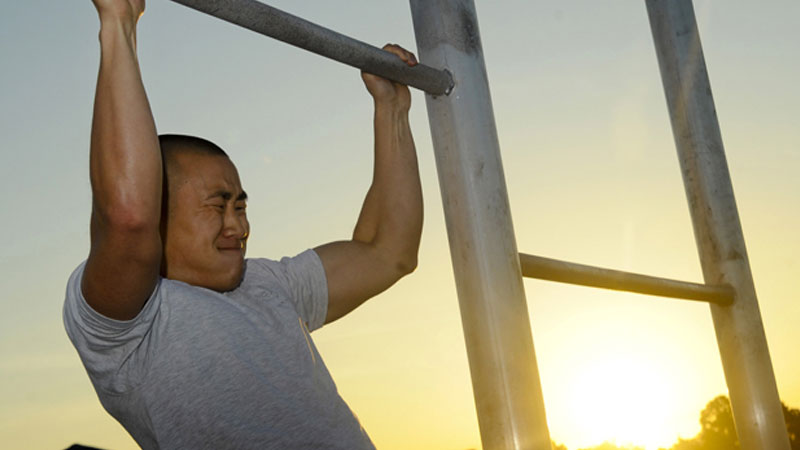 How to get better at pull-ups

If you’re currently struggling to break out even one full rep pull-up don’t panic. With these tips you’ll be mastering the pull-up in no time at all.

If you’re carrying a bit of excess holiday fat you’re having to shift dead weight rep after rep. And that makes it real hard.

That’s why strongmen and powerlifters can’t do pull-ups. Because they’re typically fatter than a grande sized bulletproof coffee.

So your first rule here is to get in a calorie deficit, train for strength and get that body weight down.

Your pull-ups will thank you for it.

We know that to get better at pull-ups you’ve got to jack up your lats and biceps. So let’s smash them into submission and get them strong enough to lift your weight.

Exercises such as lat pulldowns are an obvious choice because they mirror the exact movement at the shoulder and elbow that you’d create with a pull-up.

But you don’t have to stop there.

Less specific exercises such as seated row, straight arm pulldown, bicep curls and one arm rows all work well for adding strength to your back and arms.

Pull-up bar hangs are a great exercise to practice if your grip strength is as weak as a fingerless motor neurone disease sufferer with a broken wrist.

Just hang for as long as you can until your forearm strength gives in.

Use negative reps to get stronger

Because of the way that your muscle fibers work, you’re stronger lowering your own body weight than you are lifting it. A negative or ‘eccentric’ contraction i when you lengthen a muscle under tension.

One of the most well known strength coaches in the world, Charles Poliquin, has long advocated negative reps as a way of getting his athletes better at pull-ups.

He says that you should use a step to start your rep from the high position with your chin over the bar and then lower down under tension (so there’ essentially no ‘lifting’ of your body involved). And he also states that this gets you strong enough over time to perform full pull-ups.

Jump at the chance to get assisted

No we don’t mean that kind of ‘assisted’ unfortunately brah.

Most gyms have a pull-up machine that counterbalances a proportion of your own body weight, helping you get used to pull-ups with less load to lift.

They’re a great way to just get used to the ‘feel’ of pull-ups, without having to sacrifice form.

But our favorite way to get better at pull-ups is to use a resistance band. Just loop it over the bar so that it’s long enough to put both feet in it.

Because the band is elastic and there’s tension in it at full stretch, it adds a kind of recoil that makes the pull-up easier throughout the whole range of motion. All while keeping your technique strict and grooving out a pattern that’s exactly the same as a full-on pull-up. 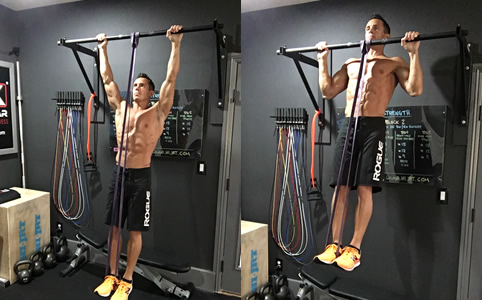 We’re kind of half joking with this one. But the fact that dudes have a solid 39% of their body mass in their lower body means you’ve got a whole boat load of weight you’re lifting. And the legs aren’t involved in pull-ups in anyway.

Check out the pro gymnast athletes.

They definitely skip leg day because they know that less load to carry when they’re performing crazy sh*t like undergrip Walstroms and the longswing Makutz makes things easier.

So you have our permission to forget squats and leg presses if your goal is to get better at pull-ups… but become a joke in the gym at the same time.

The hardest part of the pullup can be generating enough strength and momentum to actually begin lifting your own body weight.

When you’re hanging there with your arms straight and your lats stretched, your muscle fibers find it hard to pull against each other. This means that the ‘strength curve’ isn’t in your favor, and its tough to get the rep underway.

Scapula pull-ups teach your body to build the momentum you need to complete your first full rep. All you need to do is:

The close link between martial arts and mental health