Presses and pulls might be the main staple of your strength program right now. But throw in some loaded carries and take your muscle mass and fat loss to a whole new level altogether.

Whether its loading up every single damn bag of groceries from the car or holding your girl in the air while you smash the ass off her.

Over the last few years, loaded carries have become more and more popular as an actual workout tool.

Putting the right exercises in your program can have a huge effect on lean gains. And if you want to drop fat fast and gain high-speed hypertrophy, this is the drill for you.

If you can grip, rip and carry, you’re on your way to a new physique altogether.

Here’s why loaded carries get you plain jacked…

What are loaded carries?

Defining exactly what we mean by loaded carry exercises is always a good place to start. It’s also pretty easy to explain too, as the name kind of gives it away.

You might also know loaded as carries as farmer’s walks. We’re guessing they’re called this as manual workers like farmers have to carry heavy stuff around by hand all the time.

Loaded carries were first made popular in strongman events. But you don’t have to be a competing strongman to give them a go.

Many people in the know say it was the great strength coach Dan John that changed the game and made farmers walk exercises popular in mainstream fitness gyms.

What equipment do you need for farmers walks?

Just something that’s heavy enough to push you out of your comfort zone.

It doesn’t have to be so heavy that it makes your eyes bleed or prolapses your anus. Just heavy enough to make you work hard, burn fat and stimulate muscle growth.

You can choose to carry:

Loaded carries are as functional as you’ll get

When it comes to the term functional training, loaded carries tick all the boxes. Walking is a natural movement that you replicate every day.

And you can overload it to improve your day-to-day ability too.

Forget all of that new age rotational lunge on a wobble board while performing single arm lateral raises. In fact there’s only 3 things more functional than loaded carries – f*cking, eating and shitting.

Why are loaded carries so good for conditioning?

The thing about loaded carries is that they work a ton of muscle and get your breathing and heart rate going like some crazy shit high-tempo drum and bass music.

Heavy weighted walks not only force you to shift your legs at a hyper-speed pace with small steps, but also smash your core to pieces too as you fight the momentum of the load.

Your grip, arms, shoulders and traps fight isometrically (they’re contracted but not moving) and that provides a big stimulus for muscle growth.

Not only that, but when a muscle is contracted maximally it begins to recruit fibers from other muscle units around it to assist.

This is called irradiation.

Because of the shear strain on your body, practically all of your muscles will be firing due to extended muscle tension.

There’s even a huge stress on mental capacity too as you scramble for the finishing line as fast as you can with what feels like the weight of a super massive black hole in each hand.

If you look at research into loaded carries during strongman events, the calorie turnover is huge. And it’s not even the fact that strongmen are just fat, old dudes that have to burn loads of calories just to move – because they’re as f*cking jacked and lean these days as pro bodybuilders.

There have been a few studies done on what science nerds refer to as ‘junkyard training’.

They found that exercises such as loaded carries led to high levels of lactate in the body, as well as a pretty massive increase in maximal heart rate too.

These are both indicators that you’re shredding your way through calories faster than a vegetarian at a broccoli convention.

In terms of bang for your buck, loaded carries are the strength equivalent of HIIT training. And we all know how effective that is for conditioning and fat loss.

How come loaded carries get you jacked for muscle hypertrophy?

We’ve already mentioned that LCs hit practically every major muscle in your body.

From your upper back fighting hard not to depress, to your shoulders working hard to stabilize the load.

Your spinal retractors are forces to pull your chest up and your arms are braced to hold the load in each hand.

Factor in the grip of death, your heavy calf work from walking and a nice bit of action going off in the core and you’ve got some huge muscle hypertrophy stimuli.

Variations on Loaded Carries for Hypertrophy and Fat Loss 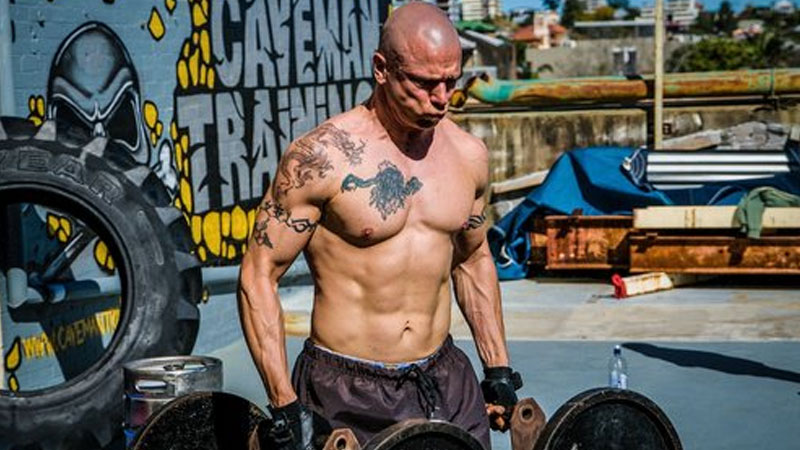 This is a great drill to get you started in the wonderful world of loaded carries. Pick up a pair of weights and walk for whatever distance or time you’ve planned in.

The aim is to keep your head up, shoulders back and chest out. Your arms should be relaxed but your grip as tight as a virgin cooch.

Take rapid but small steps and try to stop the weights from swinging away from you. Maintain a natural breathing rate and don’t forget to avoid arching your back when you drop the weights.

Tip: Using a trap bar for this one works well if you want to load up some max weights. 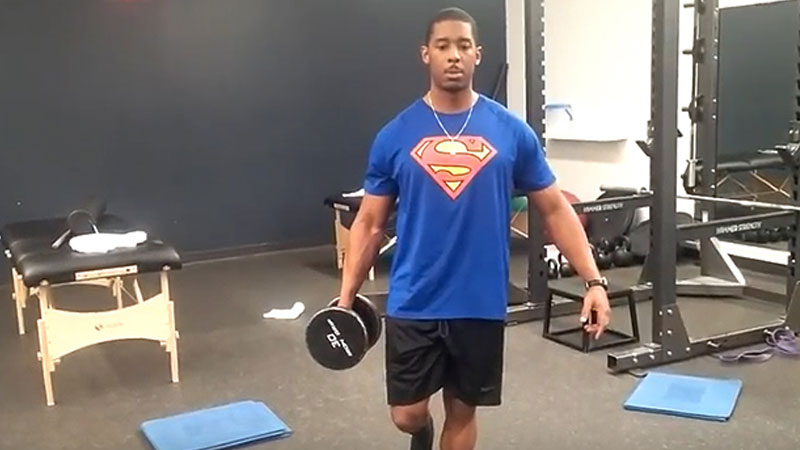 The technical points are the same as above. The only difference is that you’re only lifting one kettlebell or dumbbell in a unilateral fashion.

There’s a huge hit on your core here as you try your best to keep your hips and shoulders stable. It helps to use your non-lifting arm as a counterbalance by holding out to your side slightly.

This is a great one for breaking through muscle imbalances and to train the deep muscles of your trunk and abs. 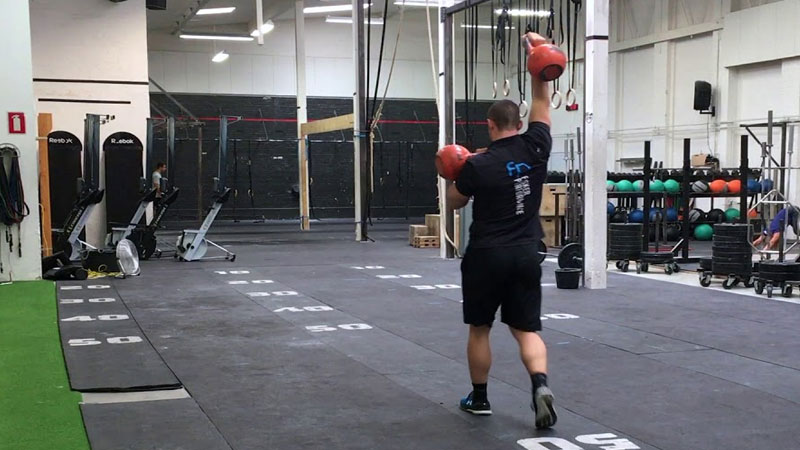 Things are starting to get fancy now as we take that load up above your head.

It might sound crazy this one, but rest assured it’s a staple exercise in the SpotMeBro office… and we’re all jacked to fuark.

You’ll not be able to go as heavy as you would some of the other drills, but the way it targets your delts is something else.

How do you program loaded carries into your training?

The general rule is to go for heavy and long for both fat loss and hypertrophy.

Here’s a sample program that we follow for a 4-week block:

Like any training, your primary focus should be on progressive overload.

Lift as heavy as you can and always try to add more weight or distance to your walks to stimulate fat loss and muscle hypertrophy.

What Is a Meadows Row and Why You Should Try It?

How to Get Better at Pull-Ups - Beat Body Weight Woes