When it comes to detailing a back that could blot out the sun and scare young children with its shear imposing vortex of mass, it’s all about back day.

If you’re a real lifter, your workout will be more developed than a bit of bench press, arm day and some abs for the weekend.

A comprehensive and strategic weight lifting workout is what you need if you want to create something that’s worthy of a Roman or Greek granite statue.

One thing’s for sure; if you want to grow you gotta row, bro.

Meadows rows are for anyone that struggles to really feel their back when they perform standard rows. They’re also a nice variation for anyone that wants novel stimulus for growth too.

And if you’ve got a stubborn body part such as your lats, it can be frustrating. To the point where you’re just about ready to launch your shaker at the gym wall, jack in the iron game and take up a pussy sport like race walking.

But don’t worry just yet, because here is the cure for your punt ass back…

Using the Meadows Row to Carve out a Huge Back

You know the story.

A few sets of lat pulldown, a seated cable row and maybe a few straight arm pulldowns or rear delt raises if you’ve got time.

But on your quest for maximum mass there’s more to posterior training than just the basic lifts. If you want to really optimize results you’ve got to get your head out of your ass and try something new.

If you knows anything about bodybuilding you’ll have heard of the Mountain Dog, John Meadows. He’s an American legend that sports one of the greatest physiques on the circuit.

And as a successful coach, trainer and multiple trophy wins he’s got one of the best backs around. Meadows knows a thing or two about developing a back that would shame a wandering albatross.

(They have huge wings, look it up).

What exactly is the Meadows row?

Meadows used to split his strength training routine into individual muscles per day, as was the standard approach back in the day.

As part of his monstrous back days, he’d follow workouts from legend such as Lee Haney where his routine would consist of barbell and dumbbell rows, as well as pull-ups or chins.

But it just didn’t get him the mass he was after.

That’s why he brought the Meadows row to life

The Meadows Row is designed to annihilate your lats, traps and rear delts.

It’s not a million miles away from a typical dumbbell row, only with a few subtle and clever modifications… and a change of equipment.

Here’s how you perform the Meadows row:

One of two things will happen if you put the meadows row in your workout.

Either you’ll trigger muscle growth so aggressive that doctors will try to prescribe psychopharmacological meds to your lats… or you’ll sh*t your pants through the shear bone-rattling intensity.

But that’s the fun part right?

Why Should You Try The Meadows Row?

The great thing about Meadows rows is that they let you go heavier than standard single arm rows, but with less strain on your lower back. As an alternative they throw pure gasoline on the fire of muscle building.

Even Meadows himself says that “this exercise (the Meadows row) is more responsible for the mass and detail I’ve added to my lats than any other exercise”.

Aim for high volume with this one.

4-5 sets of 8-15 reps will kick start some serious gains bro. Just watch that lower back though and don’t use too much momentum.

Target those hard to grow areas 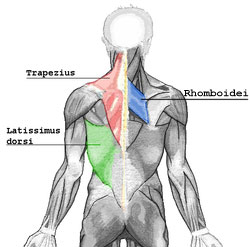 Much like a maths teacher, you’ve gotta think about those angles.

The main muscles that are targeted with a Meadows row are your latissimus dorsi, trapezius and rhomboids.

As bang for your buck lifts go, it’s not only by invented by the mountain dog, but for the top dogs.

Use mind-to-muscle connection to maximize growth

It’s pretty accepted now that as well as load volume and progressive overload, your mind-to-muscle connection is a big part of getting jacked.

Focusing on specific muscles doing the work, rather than just what you do with the bar or dumbbell helps to recruit more muscle fibers, and therefore enhance neural drive and the muscle building stimulus.

Because of the range of motion and bar path, it’s actually pretty easy to focus on intention with your lats.

More so than standard rows anyway.

And it’ll provide just another weapon in that back smashing arsenal you’ve got.

There’s only one more thing more important than beautiful gains, and that’s safety (our lawyers made us put this following bit in).

If you suffer from a lower back strain or you’ve got the erector strength of a glycogen-depleted, malnourished distance runner, you might want to be careful with this one.

It’s for real lifters. Not pretenders to the ‘gain of thrones’.

Yeah, you can cheat the weight slightly as you drive the bar upward – but the main focus should always be a small amount of hip movement, not rotation of the lower back.

Improve Performance With This Mobility Workout