Ropes have played a pivotal part in mankind’s success for thousands of years. Ancient Egyptians used them to haul gargantuan stones to the top of pyramids. Viking warriors in their longboats lashed their sails with thick lines, fighting furiously against the thunder and waves of Odin.

Plus, let’s not forget all the bad guys captured and tied up by heroes in movies.

It would only be a matter of time before we started to use ropes for fitness. More specifically, to make men double-jacked, d*ck-skin shredded, and develop world-class conditioning.

Battle ropes, AKA battling ropes, are a new breed of training equipment. Benefits go above and beyond just making dudes stronger, entering into the realm of total body conditioning.

The only limit of battle rope training is the creativity and heart of athletes using them. Here’s everything you need to know to get started, bro…

Battle rope workouts first emerged in the modern fitness world because of one man, John Brookfield. His idea was to create a training method where constant output in the form of velocity could be maintained at all times. Simply put, athletes can go and go without a single moments rest.

According to Brookfield, momentum is almost none-existant in his unique system. Therefore, to become a badass battle roper, you can’t rely on gravity to lend a hand. Momentum during exercise offers the athlete a slight chance to recover, which is something these thick cables of fiber don’t facilitate.

Brookfield says battle ropes create a scenario where the athlete can work at higher intensities for long durations. With that in mind, it makes sense as to why every UFC or NFL training montage shows these muthas being slammed hard into the ground.

Typical battle ropes are 50 feet long and 1.5″ thick. Ultimately, circumference and weight can mean the difference between breaking a sweat and busting a lung. Thicker and heavier ropes provide a harder hitting workout, but the intensity is almost always determined by the user. It’s a real ‘you get what you give’ game with these babies. 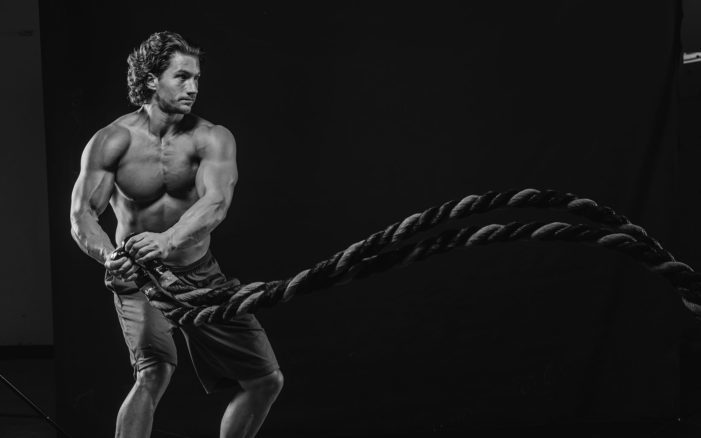 You’ve seen the benefits of battle ropes in action. Athletes you’ve watched handling them on screen during the countdown show shock the world on game day. Superior conditioning is evident, minuscule body fat turns abs into a crinkled roadmap, and power flows through their veins like a Super Saiyan Jedi wielding a nuclear weapon.

But, then again, we’ve witnessed the other side. Think back to the last less-than-average Joe Shmoe giving ’em a go in your gym. Would you say it looked more like a skinny kid trying to take a gigantic unruly T-Rex for a walk, or a drunken Harry Potter trying to cast a muscle spell?

Either way, if you’re doing it wrong, things just look and sound plain awful. Sorry, bro, no benefits for you. Just viral Instagram fame in a matter of minutes…

But, do everything right though and you can:

According to creator John Brookfield; “The key to their effectiveness is that they work each arm independently, eliminating strength imbalances as they sculpt your muscle.”

Rather than one dominant muscle or side taking the brunt of the load, every millimeter of muscle fiber must pull its weight. Back, core, legs, shoulders, arms, you name it – without all their input there’s no way to keep that rope moving.

Plus, power training is made possible for the entire body by slamming the ropes into the floor at maximum effort. Rather than be restricted to carefully controlling a barbell, you can go all-in like never before. Training with ropes allows an athlete to go for full power without having to slow down like they would have to with a heavier load.

So, if you’re after a total full body workout with one piece of equipment, you’ve found it. Not only that, but the consistent intensity means there are no sneaky micro-breaks of rest. No way bro, it’s hard work from start to finish, making battle ropes the ultimate cardio tool.

Plus you’re going to be putting your body through both physical and psychological warfare. Your mind will adapt and grow stronger just like the muscle tissue under your skin.

How so? Because just as our muscles adapt to the stress inflicted upon them, so does our mental strength. Just as you’d progress and smash bench press PRs, you work to break down mental barriers.

Learning how to over-ride your mental ‘I’m gonna quit’ monologue will bring you success in everything from business, to bodybuilding, to elite level MMA fighting. Remember, quitters never win, and winners never quit.

Finally, battle rope training will forge you a core of pure steel. By consistently keeping your body stable during whips, slams, and waves, your non-limb muscle groups experience an incredible workload.

Imagine your core like the trunk of a tree holding fast in a vicious storm. As your arms go insane in creating tsunami patterns along the rope, your base must stay stable at all costs. Now you understand why so many contact sports athletes never stop learning the ropes. Sorry, that pun was awful. 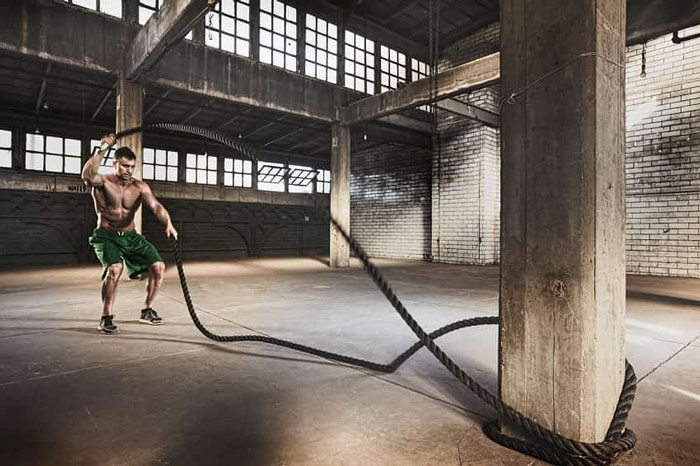 You’re ready to grab the ropes with both hands and blast your way to single digit body fat. Working hard is in your blood, and drips from the steamy sweat of your daily workout. It’s all cool though because your superhuman supply will never run out.

You’ll also need to grab yourself some of this stuff too!

This will be your set up for every workout. No more, no less. It’s that simple but so god damn effective.

Intensity and difficulty can be changed with distance management. Get up close and personal to the anchor point to increase the effort required to whip the rope. Alternatively, step further away to elevate how hard you have to work for that training session.

Now you’re all set for battle bro, let’s look at the moves. As we’ve already mentioned the possibilities of battle rope training are endless. All you need is the tools above, imagination, and the balls to get sh*t done!

How To Do It 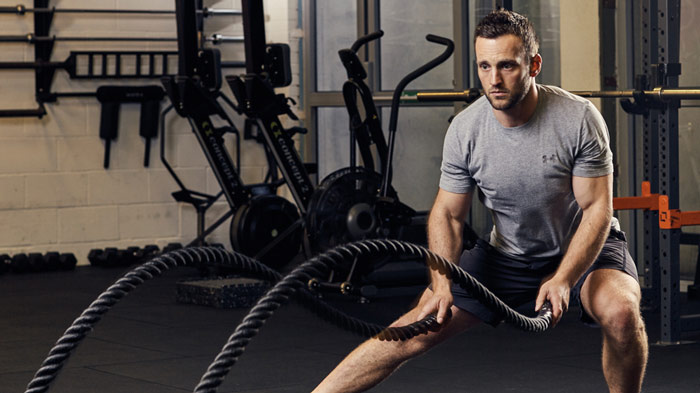 Set your feet in a squat position before you start. Moving the ropes effectively will require a stable base, so engage the core and keep your spine aligned at all times.

You’ll ultimately be generating power from the ground up. Driving your legs and expelling force through your entire kinetic chain.

There’s no need to spend hours out there with these battling beasts. Just as little as 20-minutes is enough for a full battle rope assault. Use your heart rate to monitor your output and try to keep it elevated when hitting shorter workouts.

The main movements found in battle ropes workouts include:

Face the anchor point with knees bent slightly and your core braced, grab one rope handle in each hand. Raise and lower your arms with enough force to generate a wave moving through the rope. Keep the elbows tight to your body for a serious core blast.

Try to keep a flow for the allocated time for your workout. For alternate waves, move the hands in opposite direction to create alternate waves on each side.

Hit the same movement as the above alternate waves. Your strong squat stance will already have you set up perfectly for the shuffle.

Maintaining flow and movement in the rope, shuffle side to side. Imagine football or soccer drills to get the picture. Add this to your training session to work both upper body and lower body stability.

Named the wrestler crossover due to its highly dynamic throwing simulation, this move is perfect for power and conditioning. You will essentially be creating a wave through both ropes simultaneously across your body.

Start on the right-hand side in your squat stance. Hold both ropes at hip level before explosively crossing them to your left in a high arch. Slamming the ropes into the floor as hard as you can is the key to power development. So don’t hold back, bro, give ’em all you’ve got.

As you’ve probably guessed these are the ultimate knockout power builders. Who doesn’t want more explosive blitzkrieg power, right? Set yourself up in the usual position with knees slightly bent, core braced, and back neutrally aligned.

With everything, you’ve got bring the handles above your head and slam the rope to terra firma. A tsunami style wave should shake the anchor point. If it doesn’t, you’re not going hard enough, bro! Get your sh*t together!

Bro, now you have all the vital info you need to become a battle rope master. Take this highly versatile workout tool and make it your own.

Battle ropes were originally created as a workout tool by John Brookfield. But, ropes have played a pivotal part in mankind’s history since they were first invented. So, it makes sense that we’d find a way to work out with them.

Remember – the possibilities are endless. Take the above movements and turn them into a workout for your own gains. Hit Tabata’s for a conditioning cardio blast or savagely slam them into the earth to build superhuman power.

Just remember to keep your heart rate elevated for maximum effect. Oh, and feel free to get creative with your movements. SpotMeBro have only shown you the early essentials, the rest is up to you. Are you ready for battle, bro?

Want more of the most up-to-date knowledge on getting swole? Check out:

A Bro's Guide to Every Stereotype Found at the Gym

10 Fitness Apps You Need on Your Smartphone 2018