If you’re looking for a new way of training to ramp up muscle growth and carve out real biceps mass, we’ve got the solution you need – blood flow restriction training.

Real bros like getting tied up and thrusting their body around until their throbbing muscle feels like it’ll explode.

And now it seems you can spark pretty huge slabs of muscle by doing the same thing.

It disregards the traditional ‘get strong to get jacked’ approach, and focuses on building muscle mass by hijacking your vascular and hormonal system.

If you want to use this low-load, brutal protocol for better gains and discover muscle pumps so aggressive it should be prescribed anger therapy, read on to get those gains…

What is blood flow restriction training?

Back in the nineties, Japanese scientists concocted the awesome idea of tying cuffs or wraps around limbs during exercise to see what happened when arterial blood flow to a muscle took place, but outflow from veins didn’t.

They found that exercising while wearing these cuffs led to improvements in muscle cross-sectional area.

Of course, this quickly made the ears of bodybuilders, strength athletes and pretty much anyone else on the gains train prick up, because it was totally new way of adding good quality mass.

Fast forward a few years and ‘BFRT’ has become the uber-cool new way of bulking up with minimal weights needed.

Blood flow restriction training is all about controlling vascular flow.

By allowing blood into your target muscle but not out, you can significantly alter the volume of blood pooled within it.

In other words, you ‘trap’ blood in your muscle – as well as all of the oxygen, nutrients and metabolites that come with it.

It used to be referred to as ‘occlusion’ training for a while. But because it only impaires blood flow and doesn’t stop it altogether, the term occlusion isn’t used as much now.

Although you can use BFRT for practically any exercise, it works best with those that target your arms, quads and calves.

The mother of all of these is the bicep curl.

Because you can never have biceps with too much girth.

The pump is unreal brah

BFRT gives you a phenomenal muscle pump. Like you dived into a bag of citrulline head first with your best impression of a deranged Tony Montana.

“Say hello to my little friend… those fuarking gains bro”.

If you want a quick workout to pump up the guns before hitting the Friday night bar, blood flow restriction training is the answer. 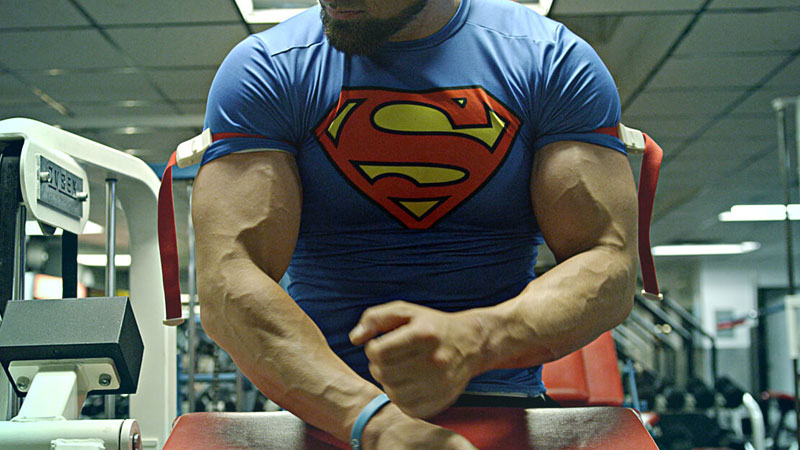 BFR involves tying off the ‘proximal’ end of the muscle, so that as it contracts, blood is pumped into the muscle, but can’t get out.

Basically, you put the wrap or elastic cuff around the end of the biceps muscle nearest to the center of your body.

For biceps, it goes just in line with your axillary fold – the crease where the head of you bicep is overlapped by your deltoids.

Get that cuff nice and tight

Before you start repping out some biceps curls, make sure that your wraps are tight enough to work.

The original research used specialized ‘KAATSU’ bands with built in pressure sensors so that cuff inflation could be measured properly.

But they’re expensive though!

Unless you want to spend your hard-earned dollars on fancy elastic bands, you should just tighten a strap or tourniquet band to around 7 out of 10.

If you achieve Michael Carradine levels of tightness, you might have gone too far. 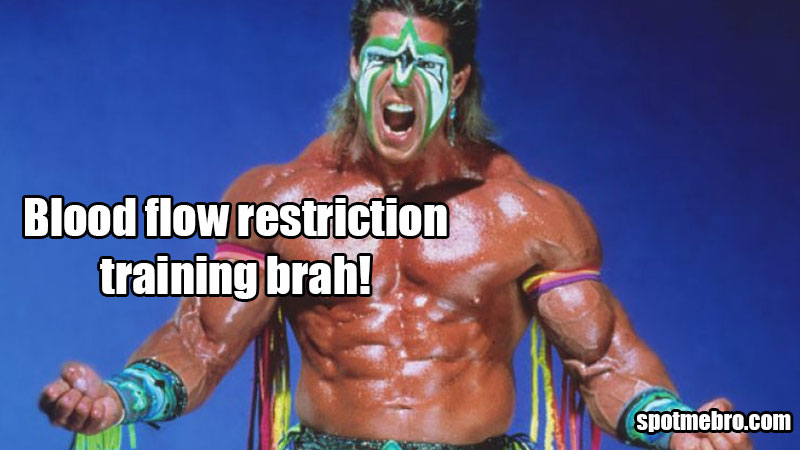 Once you’re tied up like some mad ultimate warrior dude, you need to follow a set protocol.

Firstly, choose a weight that’s only 20-30% of your 1-rep max. This is a weight you could bust out 40 or so reps with under any other circumstances.

Here’s what you need to do:

You’re trying to achieve muscular failure on at least one of these sets or all of them if you’re not a pussy and don’t mind feeling like you’ve been smashed with full-force muscle soreness.

DON’T take the band off until you’ve finished the very last rep.

And that’s it really. Simple.

But f*ck me is it tough.

Bro Point: Unfortunately SpotMeBro can report that our attempts to use blood flow restriction training on our wangs were unsuccessful. Maybe that’s because you can’t improve maximum mass?

The Research: Why does blood flow restriction training get you jacked?

In order to understand what’s going off with blood flow restriction training, and its crazy ability to boost mass, you have to don your lab coat and get on that rollercoaster we call science.

It all comes down to metabolic stress.

How does such as light weight ramp up muscle mass?

Because there’s limited oxygen involved in muscle contraction during blood flow restriction training, your type l muscle fibers are impaired. This leaves your larger (and more growth dominant) type ll fibers to do the work.

The side effect of this is that there’s a huge surge in growth hormone, MToR and IGF-1 – all important for muscle hypertrophy. There’s also a downregulation in myostatin – a myokine that kind of blocks muscle growth like an off-switch.

This is basically a recipe for muscle growth.

Wrapped up in a f*cking horrible soreness that you just can’t explain until you give it a go.

But in the quest for panty-dropping gains, soreness is what cuts the bros from the boys.

You don’t need to go heavy to boost biceps growth

We’re generally told that volume load is the key to hypertrophy. So when you hit the gym, you know that lifting heavier weights for a given rep range leads to more growth.

But that’s not the case for blood flow restriction training.

This is probably because heavier weights fatigue the muscle quicker and don’t give it an opportunity to accumulate the same amount of trapped blood flow.

Use a narrow cuff to maximize mass

Research shows that when you use a wider band, like a knee wrap or wrist strap you don’t get the same reduction in circulation then you would with a narrower cuff (5cm or so wide works best).

This is one of the only occasions where more width isn’t better.

BFRT benefits those with injuries as well as older adults too

There are a few studies out there where scientists have tied up the calves of old dears and then sent them out for a walk.

Okay, we don’t think Grandma Gretchen will be rocking up to knitting club with calves that out-angle Mike Matarazzo, but it certainly helped them build some muscle mass.

And if you’re an athlete who’s currently out of rotation due to injury, blood flow restriction training has been found to help maintain muscle mass, even in pretty immobile limbs.

And even with an injury that doesn’t allow you to lift heavy.

Are there any side effects to blood flow restriction training?

Who cares about side effects if the gains are real bro?

That’s what you have to ask yourself.

But in all seriousness though, the clinical trials that have looked at side effects have found little more than a bit of bruising (probably in some noobs).

As few as 1.3% of people report a feeling of numbness in their biceps when they blast through blood flow restriction training.

And we agree, it kind of feels like having your blood pressure taken at the doctors.

But again, it’s worth it.

The only people that shouldn’t try blood flow restriction training are those with:

Rarely is there a training method that comes along and sparks any real interest at SpotMeBro.

We’ve seen and tried it all, and anything remotely ‘new’ is usually just a variation of a theme we’ve already seen.

Blood flow restriction training is definitely something to try. When else can you get jacked with such small weights?