Walk into any athlete strength room and you’ll see powerful dudes Olympic lifting. They’re fast, explosive and strong. They understand the value of Oly’s for strength, speed, and acceleration… and now it’s time for you to do the same.

Some bros lift weights to look good. They’re all about the aesthetics.

They use the weights room to good look in the changing rooms. It’s all about well-lit selfies, muscle tops, and Instagram likes. Others lift to perform better – to be stronger, faster and more explosive.

This isn’t an article for wannabe fitness models.

Olympic lifting is all about building full-body, functional strength. It’s about maximizing training that translates to the field or the tack. And finally, it’s about building bulletproof physiques that are forceful and strong. Hell, it’ll make you look good too… but that’s not the purpose.

It’s time to chalk up, focus and get powerful bro. Check it out…

What Is Olympic Lifting?

Olympic lifting is a modern competitive sport involving two lifts – the snatch and the clean and jerk.

There are hundreds of styles of strength training, each one with its own specific rules. As a full-on bro you’ll have heard of drop sets, German volume training, and supersets. You probably use them regularly too.

But Olympic lifting is different. It’s not just a system of lifting, but a sport in its own right too.

As well as being a sport, Olympic lifting techniques are used commonly in athlete strength rooms to build athleticism – from speed and strength to power and performance. It’s also one of the safest sports too, with injury rates being as low as 2.4-3.3 per 1,000 hours of practice.

Here’s a breakdown of each of the lifts… 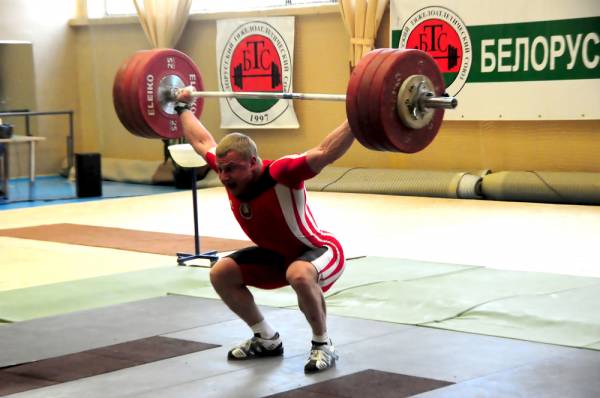 Not only is snatch an urban dictionary name for pussy, it’s also an Olympic lift. So don’t get excited when we tell you we’re about to dive head first into snatch territory.

The objective of this lift is to pull a barbell from the floor to an overhead position in one fluid movement. It’s designed to showcase bar speed and power, so the weight on the bar itself is often lighter than in the clean and jerk.

The aim of the snatch is to lift the bar from the floor with a wide grip. Move it past the hips, before explosively pulling yourself under the bar. Finally, you have to catch it with locked elbows in a squat position as the bar reaches the top of the movement. And then stand from the squat position you caught it in!

It is bro. But we’re not in bicep curl territory now sweetheart. This is the real game right here.

The aim of this phase is to lift the bar from the floor to the knees. Your grip is wide to allow a powerful pull and to keep the bar close to your body at all times. The main movement here is knee extension, finishing as full extension is achieved. The angle of the torso remains pretty much the same throughout this phase.

As the bar passes the knees, the movement switches to hip extension, resulting in your torso moving to an upright position. Once the bar reaches your upper thighs, knee angle remains the same until the bar reaches the crease of your hips. You finish the transition phase in what’s known as the ‘power position’ which is upright but with a light knee bend.

The goal here is to take advantage of a fast-moving bar, which has been building speed since it left the ground. This phase is where most force and power is developed.

During the second pull, the aim is to push into the floor, rise onto the balls of your feet and simultaneously extend the ankles, knees, and hips – what’s termed triple extension. At the same time, you begin to shrug the bar upward and bend at the elbows to assist the legs in generating force.

At this stage, the bar has reached maximal velocity. Your aim now is to get yourself in a position ready to catch the bar and absorb the load of it as it begins to slow down.

During turnover, you need to get in a stable position as fast as possible. Leave it too late and you’ll be off balance as that heavy-ass muthaf*cker comes crashing down on you.

Most lifters widen the feet slightly and pull the hips down into a squat. You’re essentially catching the bar in an overhead squat position with solid shoulders and locked elbows.

During this phase, the goal is to rise from the bottom of the overhead squat to an upright position with extended knees, hips and elbows. The idea here is to avoid rushing so that the bar remains stable… but not taking too long so that its weight forces you to crumble under it.

The Clean and Jerk 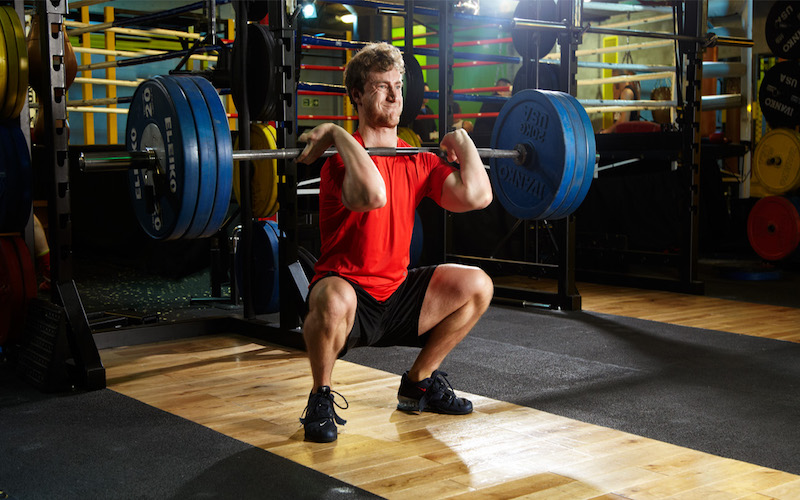 Now you’ve been deep in the snatch it’s time to clean it and then jerk it off with the C&J.

This lift is split into two different movement patterns. The clean is where you pull the bar using a conventional deadlift position and catch it in a ‘rack’ position in a front squat. The second movement is called the jerk and involves explosively pressing the bar upward into lockout above your head.

Mechanically, these phases are the same as in the snatch. They both involved knees extension and then hip extension, the only difference being that the grip is shoulder-width and not a snatch grip.

The consequence of this is that the bar won’t contact the hip crease during the transition and power position, and will likely contact the top of the thigh instead.

This is where the differences between the clean and jerk and snatch start to come into play. Rather than pulling yourself into an overhead squat position during the C&J, you catch the bar in a rack position across the front of the shoulders.

You basically end up with the bar at the bottom of a front squat.

From here you can squat the bar upward into full knee extension, with your elbows facing forward and cradle the bar across the shelf of your front delts, clavicles, and upper chest.

At this stage, your feet are at about hip-width apart and the bar is comfortable in the rack position.

From here you need to bend the knees slightly (to a quarter-depth squat position) to build momentum and then drive through the heels through the floor to build upward bar speed. This is called the ‘dip and drive’.

If you build enough power, the bar will move up past your chin at speed. You’re only using your hands to guide the path of the bar and it’s the legs that do all of the work.

Bro Point: The snatch and clean and jerk are complex movements used in Olympic weightlifting competitions but also a number of athlete strength and conditioning programs.

There’s no equal when it comes to developing speed, power, athleticism, and acceleration.

Current statistics show that just under 95% of US athlete coaches incorporate Olympic lifting into their periodization plans. And if top-level coaches see the value of these lifts for athlete development, there must be something in it.

Here’s why gym bros can benefit from Olympic lifting…

There’s a difference between being strong and being powerful. And this is often misunderstood.

Strength is how much weight you can lift. A 1RM is a great example. It doesn’t matter how fast you lift the weight, just the fact that you lift it.

Power relates to how fast you can create force. It’s the product of strength and speed.

All competitive sports include elements of power. Whether that’s being able to throw a ball, kick a field goal, sprint, jump or fend off an opponent. Power and performance are closely linked, and powerful athletes are the ones that’re more successful.

As a training tool, both the snatch and the clean and jerk will help you build: 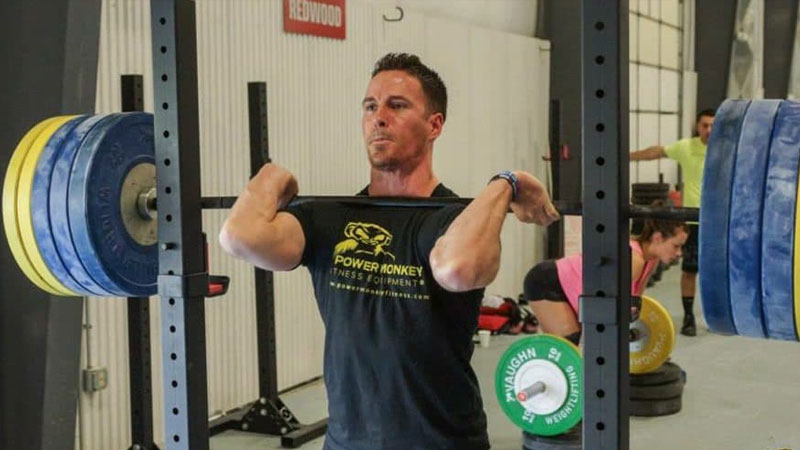 Vertical jump is considered to be an important indicator of power output.

The triple extension element (when your ankles, knees, and hips move into full extension during the second pull to turnover phase) is very similar to the forces created during a jump.

Research shows that out of all types of training, Olympic lifting transfers best to jumping performance. A study from the BMJ found that when compared to traditional weight training, Oly lifting significantly improved vertical jump power and force production – by as much as 7.7% in some cases.

#3. Get stronger without building muscle

You can build muscle with Olympic lifts… but it’s difficult without throwing in some vomit-inducing volume. And that’s not what Oly lifts are about.

If you’ve ever seen lightweight Oly lifters you’ll understand how you can get jacked as f*ck without packing on mass like a bodybuilder. These dudes walk among us and you’d never know they even lifted… until they smash out a double bodyweight overhead squat or a clean and jerk that makes your deadlift look like that of a pre-pubescent child.

Why would you want to build strength without muscle bro? That’s against the bro code!

‘Power-to-weight ratio’ is an important part of force production. Being stronger when you’re lighter gives an advantage in relative strength sports such as boxing, wrestling and anything else where you compete in weight classes.

It’s not a sport for developing mass. It’s about developing brutal athleticism. There’s a difference.

In order to build muscle, you need to load muscle fibers mechanically. Without this stimulus, you won’t trigger protein synthesis, satellite cell proliferation and all that other stuff that’s needed to build muscle mass.

Simply, Olympic lifts are so fast and involve so little volume they kind of bypass the stimulus for growth. There’s not enough time under tension to build muscle. 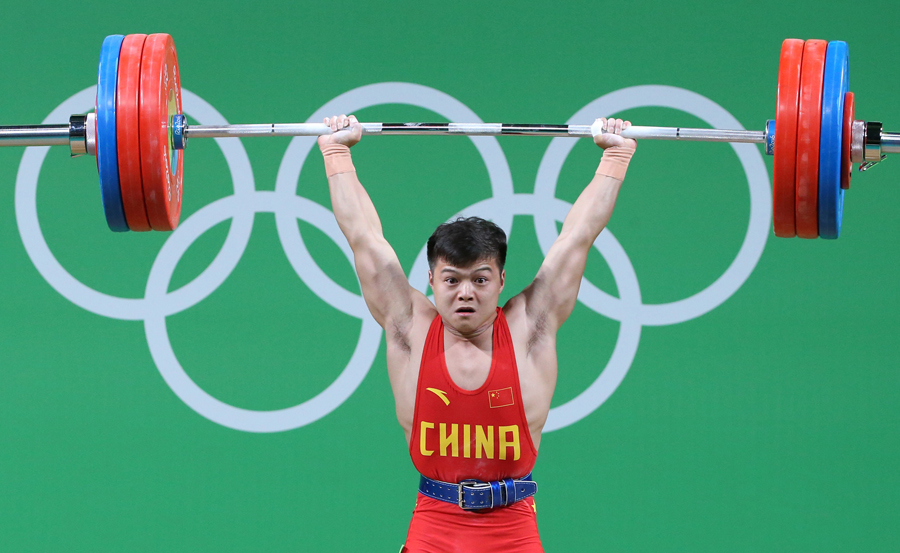 #4. Learn how to absorb forces

Being able to absorb and transmit forces turns you into a Juggernaut of strength.

If you take part in sports such as football, rugby or wrestling you’ll be used to being pummeled, beaten and smashed on a daily basis. It’s part and parcel of the sport bro, and it’s one of the reasons why we love it.

But if you’ve got the stability of a dribbling snot string you’re sooner or later going to get broken in half. You need to develop a body that’s as strong as your iron will.

Olympic lifts not only build speed and explosiveness, they also improve your ability to absorb impact forces. Remember, the recovery phase (particularly the snatch) is all about catching a heavy bar and stabilizing it through your shoulders, trunk, and hips.

If you’re involved in contact sports, Olympic lifting benefits massively apply to you.

Acceleration refers to the rate at which your body changes its velocity.

Studies show that optimal acceleration is a key determinant of athletic success. After all, if you’re slow off the mark you’re always going to be one step behind your competition.

The whole basis of Oly lifting is to push through the floor in order to generate enough force to lift the bar. This transfers fully to sprinting and acceleration in general.

If you’re involved in sports and want to improve strength, speed, acceleration, and speed, Olympic lifting is for you.

You won’t build much muscle with this technical, skill-based method of training. But if you want to be the best athlete you can be, add them to your strength and conditioning plan and enjoy the results.

Creatine for Strength and Muscle Growth: Pros and Cons