Having a ripped pair of abs or a solid pair of arms is one thing. But if you really want to dominate the weights room and show the girls just how manly you are, you gotta train delts and traps… and that’s where this shoulder workout comes in.

Carving out huge, round, cannonball delts shows attention to detail. It showcases symmetry, balance, and strength. It also accentuates your natural taper too, making even a blocky waist look narrow.

You fat dude? You’ve got two choices – slim down or build shoulders.

This is our bony to beast fix. A cure for sh*tty shoulders. Our dastardly deltoid plan. And it’s all yours…

Strap in tight. It’s time to build a physique like a pro.

Alpha Male Gains – Why Do You Need Broad and Muscular Shoulders?

Show me a dude with huge, imposing delts and I’ll show you a God among men.

Have you ever had to squeeze sideways past a door frame? Do you struggle to fit in regular sized shirts?

No. You know why? Because you’ve got tiny delts bro and need to grow them. You currently make Kid Cudi look like man Cudi. That’s real bad bro.

But things are about to get better…

A sign of a true alpha male is being imposing and masculine. Broad shoulders, a deep voice, and square jaw are all signs of high testosterone – the primary male hormone responsible for promoting masculinity.

Rewind to the times when we were simple cavemen. We enjoyed mating, eating and sleeping. That’s it. What a life! And how did the cave honies decide that it was our junk they wanted inside of them and not some other chick magnet Neanderthal?

It showed dominance, off-the-chart anabolic hormone levels, and strength; not just in physique but in personality too – a real don’t f*ck-with-me dude.

Women are hard-wired for solid muscle.

They know that a dude who takes care of himself has the ‘genetic material’ to spurt all up in them. You’re a prime choice for strong and healthy offspring.

Back in days of knights of the round table and damsels in distress, armored shoulder plates were a big thing. Before then it was gladiators who did the same.

Not only did armored shoulder plates protect a dude from advancing mace or battleaxe attacks; the wide plates made the guy wearing them look as imposing as hell. They were huge, broad and wide enough to cast the shadow of hell upon you.

It was about intimidating those around them.

You aren’t rescuing that maiden in the tight corset if you’ve got a sword sticking into your chest bro. You gotta fight for that right and beat the living sh*t out of anyone that crosses your path.

Bro Point: Broad shoulders are a sign that you’ve got a strong, healthy and assertive physique. Ain’t no one messing with a dude who’s as wide as he is tall.

All About The Delts – Shoulder Training for Bodybuilders

Your deltoid is a muscle made up of three heads that form a round, capped and triangular muscle named after the Greek letter delta. 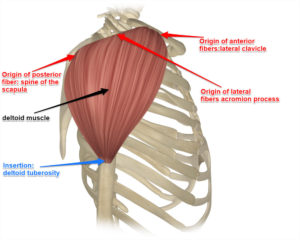 The proper name for the shoulder muscle is the deltoid (although in the iron game we’re likely to refer to them as delts).

It sits just above your upper arm and ties into the shoulder girdle with the trapezius. The muscle attaches via tendons to your clavicle (collar bones), humerus (upper arm bone) and scapula (shoulder blade).

The shoulders are split into three groups of fibers or ‘heads’:

The function of the deltoids

Covering so much surface area and being divided into three separate heads, it’s no surprise that the deltoid has multiple functions.

Here’s a run through of all of the functions of this powerful muscle (because you can’t train it if you don’t know what it does bro):

Flexes your arm at the shoulder. Like when you do a front raise or put your arms up to fight off oncoming bros. This head also internally rotates the arm, like when you give a bro the thumbs down gladiator style before you ruin that sonofabitch.

Takes your arm out to the side of your body (abduction), like when you give it the ‘are you not entertained?’ after taking a bro down with your bare hands. Also, the main muscle involved in a lateral raise.

Sitting on the back of your arm just above the triceps, the rear delt is responsible for shoulder extension movements – like when you pull your arm back ready to unleash a Hadouken-like uppercut to some punk running their mouth at you… or when you ‘re skiing down a mountain like James Bond on his way to fight bad guys or f*ck women.

The deltoids are involved in a number of movement patterns that allow a wide range of motion at the shoulder joint.

Gone are the days of training in the ‘hypertrophy range’ for muscle growth. We know now that you can grow slabs of muscle with any rep range as long as volume is high enough to trigger mechanical overload and anabolic signaling.

Muscles aren’t all the same. Take a group of lifters and biopsy their muscles and you’ll find that each one has a different proportion of muscle fibers based on genetics (and to a lesser extent how they train).

This is one of the reasons why some people can gain muscle faster than others. Some guys are just built for brute strength and huge mass, whereas others are built like beta male pussies.

There are two main fiber types in human skeletal muscle. 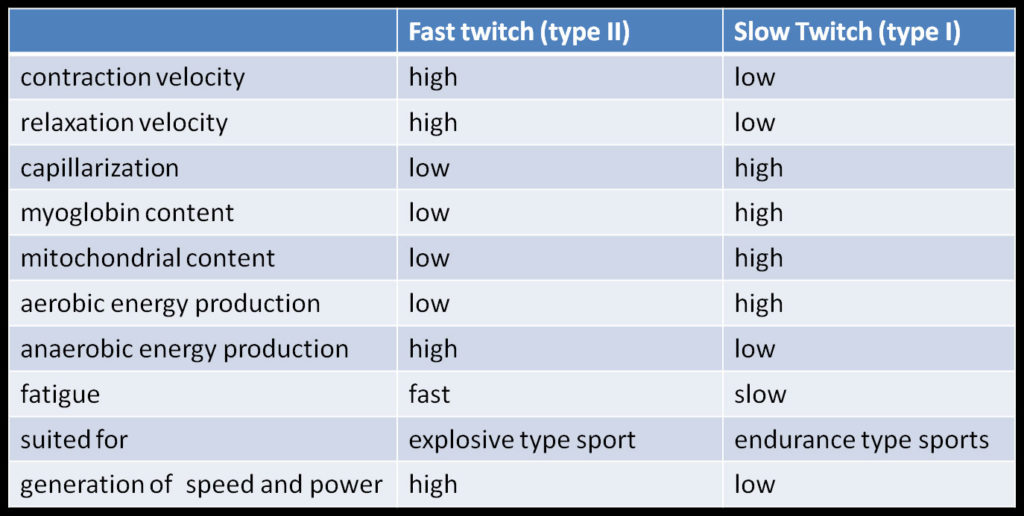 Your deltoids have an even fiber composition

As well as differences from one person to the next, each of your muscles have a different fiber type composition.

For example, in our Pro Guide to Leg Curls we reported that most bros have an equal proportion of fast and slow twitch muscle fibers in their hamstrings. But in your biceps, for example, you’ve got more fast twitch.

Through histochemical testing, we know that the deltoid muscle is around 50% fast twitch and 50% slow twitch.

A great shoulder workout covers all bases. Not only does it include high bang-for-your-buck exercises, it also takes advantage of muscle growth potential through fiber typing.

In other words, varying the rep ranges and speeds for your delts helps you specifically hit both type l and ll fibers. And this, in turn, helps you target maximum muscle fibers.

The deltoids are composed of an equal proportion of fast and slow twitch muscle fibers. Using a variety of rep ranges/speeds will help to target as many fibers as possible.

Complex muscles need simple workouts that target all fibers. This isn’t a muscle that you can fully hit with just an exercise or two. It takes precision, knowledge and great programming too.

Your delts are highly involved in other exercises. The front head is a huge contributor to bench pressing, especially incline pressing. Likewise, rowing-type movements target the posterior head.

But there’s no one best exercise for deltoids due to its wide number of functions. Throw the following bad boys of delt hypertrophy exercises into the mix though and you’ll be blotting out the sun in no time bro…

A quick note on EMG

It was EMG testing that first highlighted what the old school bros had been saying all along – you can target specific portions of a muscle with different lifts and techniques. Some exercises are simply better than others.

Loads of studies into deltoid muscle activation have used EMG testing to determine exactly how much involvement there is during different exercises for the delts. It’s considered to be a gold standard way of checking if a muscle is active during and exercise, and a great way of comparing which muscle fibers are being used at any one time.

Perfect for a muscle with three heads.

EMG testing is the most scientific and reliable way to assess which exercises are best for the deltoids. 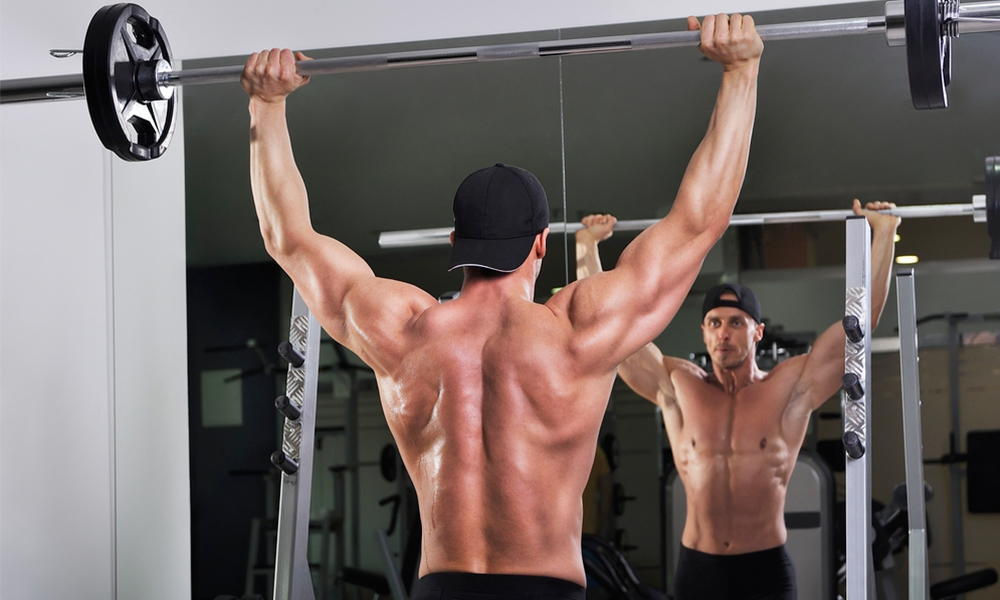 The standing military press is the King of shoulder workout exercises. It tops the EMG scale for front delt activity and because of upward rotation of the scapula and elevation of the shoulder girdle is also brutal for the upper traps too. There’s some lateral muscle involvement but not much… but practically no rear delts. 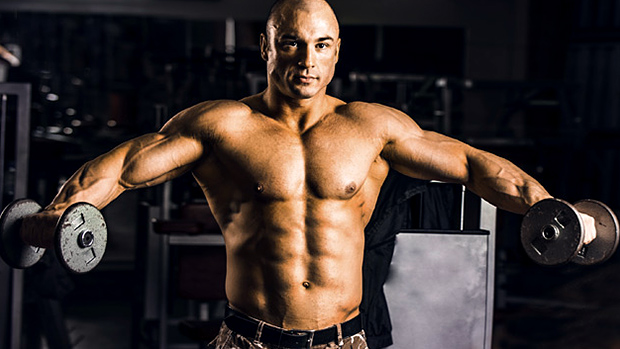 The lateral raise is an undervalued exercise that hits the lateral fibers more than any other exercise. You also get a nice rear delt activation too. It’s not a pleasant muscle to train and the lactate accumulation is a killer… but it’s worth it for that V-taper effects.

Go lighter and crank out some high volume here. 8 sets of 10-15 reps will work wonders. 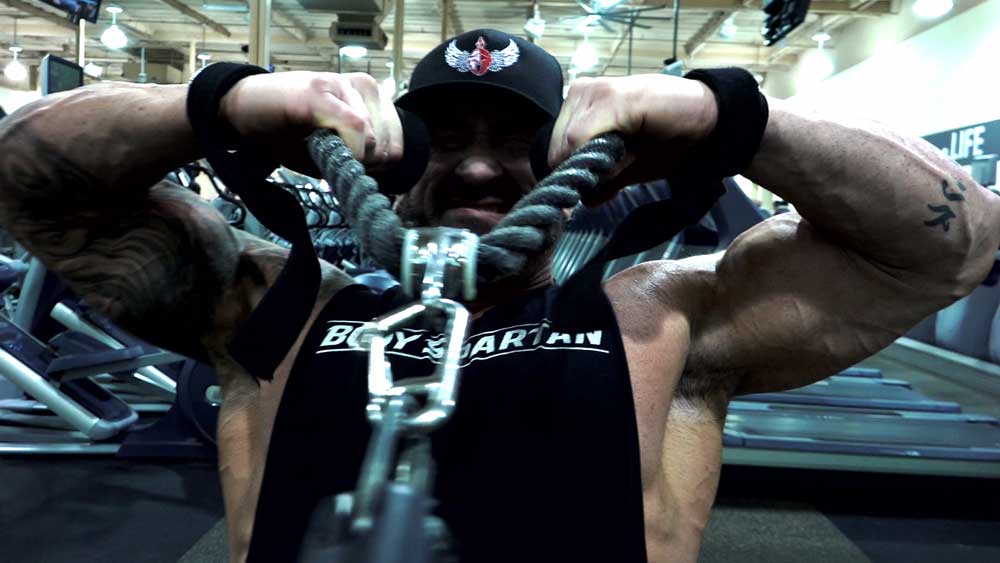 A lesser-used cable exercise that’s awesome for hitting your lagging rear delts. There’s some lateral involvement but minimal front head activation – great for balancing out the pressing you’ve been doing. This one kills like a muthaf*cker but will add serious mass to your posterior shoulder workout.

Go high rep on face pulls. Try working on 8-20 reps, putting as much weight on the stack as you can with good form. 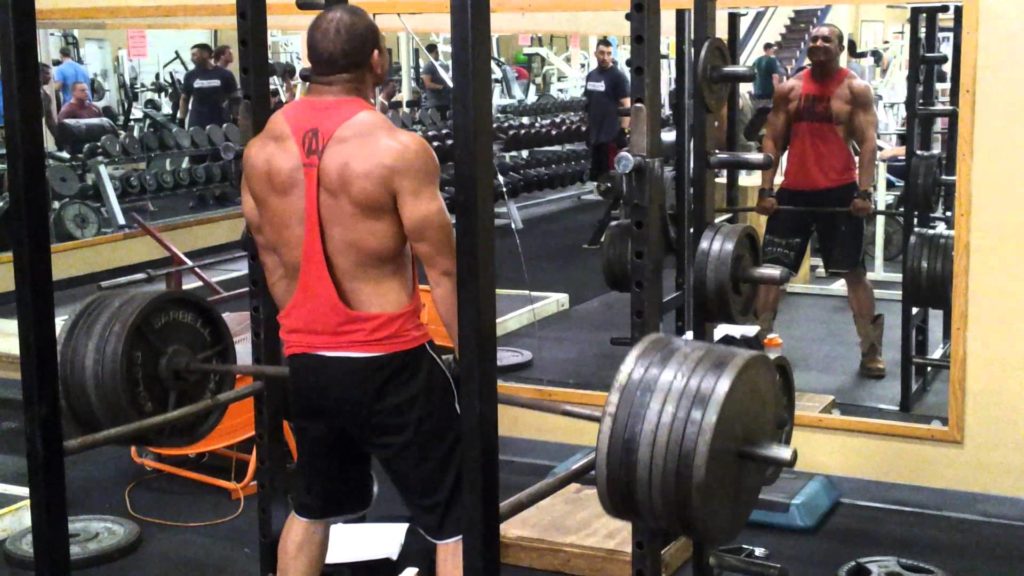 Shrugs are an insane trapezius builder. You’ll have shelves so huge, they’ll be placing ornaments on you like some kind of meat mantelpiece. Keep it slow and controlled though – this aint no pigeon show.

Go heavy or go home. Barbell shrugs were made for bar-bending. Try 3 sets of 4-8 reps.

There you have it bros. Creating a masterpiece is all about precision and thought, motivation and grit. You can’t rock up to the gym, hit a couple of exercises and think that the Olympia trophy will be in your hand with minimal effort.

A high-quality, ball-breaking shoulder workout uses fiber typing, rep ranges and exercise selection with expert programming. Like a sniper with the scoped target, you’re now ready to reign furious hell on those delts.

Want more? Of course you do. Here’s a few other articles to improve the way you train…