According to the National Institutes of Health (NIH), 50 million men are estimated to suffer from hair loss in the United States. One of the biggest underlying reasons is the complex relationship between baldness and testosterone. Here’s what you need to know…

Bound testosterone is attached to a protein in the blood called albumin or sex hormone-binding globulin (SHBG). In terms of overall levels, it’s more typical for T to bind to SHBG than albumin.

A high proportion of your testosterone is inactive and attached to sex hormone-binding globulin. It’s for this reason that men with above-average amounts of free testosterone are typically found to have low levels of SHBG.

Unfortunately, bound testosterone isn’t as available to act on the body.

What is DHT and what does it do?

Dihydrotestosterone (DHT) is an androgen sex steroid and hormone that is produced in the gonads. It’s a byproduct of testosterone and is one of the leading causes of hair loss

As an extremely potent androgen sex hormone, DHT gives men many of their masculine traits. In fact, it’s DHT that is responsible for sexual differentiation during pregnancy, as well as facial, pubic, and body hair growth during puberty.

DHT is produced by an enzyme called 5a-reductase (5-alpha) from testosterone. Once produced, dihydrotestosterone becomes five times more potent than testosterone and is the primary androgen in the prostate, skin, hair follicles, and genitals.

As the primary androgen found inside hair follicles, DHT is also related to hair loss. Although it’s not thought to be the only cause of male pattern baldness, it’s said to be a major player.

DHT causes hair loss by binding to the androgen receptors and causing them to shrink. After a while, these follicles begin to weaken, before eventually dying.

This shrinking and weakening process is known as ‘miniaturization’. Unfortunately, once it reaches its final stages, hair growth in the affected area stops completely.

Believe it or not it isn’t the total amount of DHT in your body that affects baldness. In fact, it’s all about how sensitive you are to the hormone and/or the number of androgen receptors at the site.

Genetics can play an important part in determining DHT sensitivity and receptor amount in men. So, if male pattern baldness is common in your family, you’re more likely to experience this.

It should also be noted that lifestyle factors such as diet and general health can also impact hair loss. 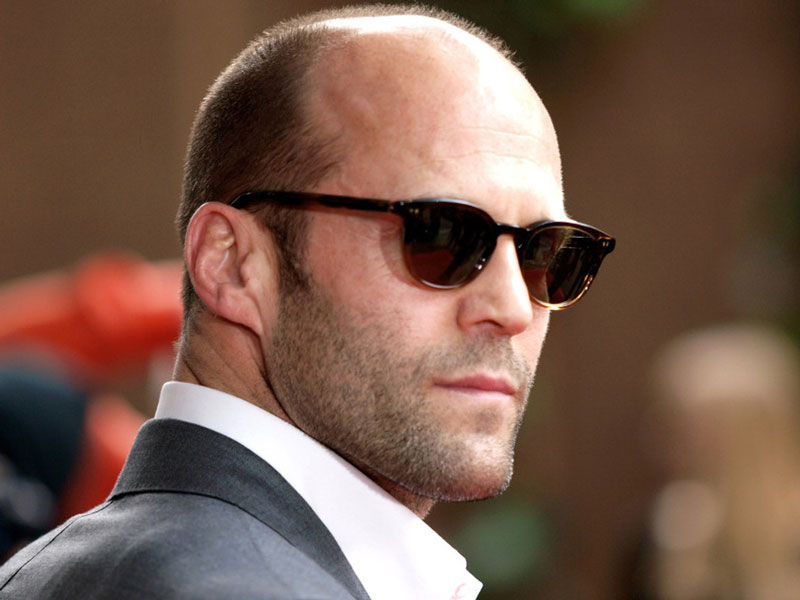 As to be expected, there are tons of myths surrounding hair loss. Here are some of the most common ones:

Men who lose their hair have more testosterone

A very common myth is that men who suffer from baldness have higher testosterone levels. However, studies have shown that this isn’t actually true. The reality is that there’s no difference between overall T levels in men who go bald and those who don’t.

Your mother’s father is an indication you’ll go bald

Another popular misconception is that your maternal grandfather is an indicator. According to the myth if he suffered from hair loss it’s a sign you will too.

Yet, while this might be somewhat true, it doesn’t offer the complete picture. Why? Well, because hair density is polygenic. You’re more likely to get a truer indication by looking at your actual parents.

Also, don’t forget to take a look at the rest of your family. If somebody else like an uncle or brother is showing signs of thinning hair, you could be at greater risk yourself.

If you recognize that you’re more likely to experience male pattern baldness, the best thing to do is to seek professional advice. A registered dermatologist can guide you in the right direction if you catch the warning signs early.

Many men often relate their male pattern baldness to stress. Now, when we say stress, we specifically mean everyday stress. This is the sort of feeling we’d describe when deadlines are tight, we’re rushed off our feet or worrying about a big day.

While this might make you literally pull your hair out – it won’t cause baldness.

However, actual high stress such as physical and mental illness can cause hair loss. This is typically in the form of either effluvium (hair follicle pauses), patchy hair loss, or alopecia areata.

For some time now, men have been told that shampoo and hair styling products cause male pattern baldness. Yet, there isn’t actually any evidence to prove this is true.

Keeping hair clean with nutrient-rich shampoo is a great way to keep it healthy. So, don’t ditch the shower for the sake of hair loss, because you could do more damage than good. 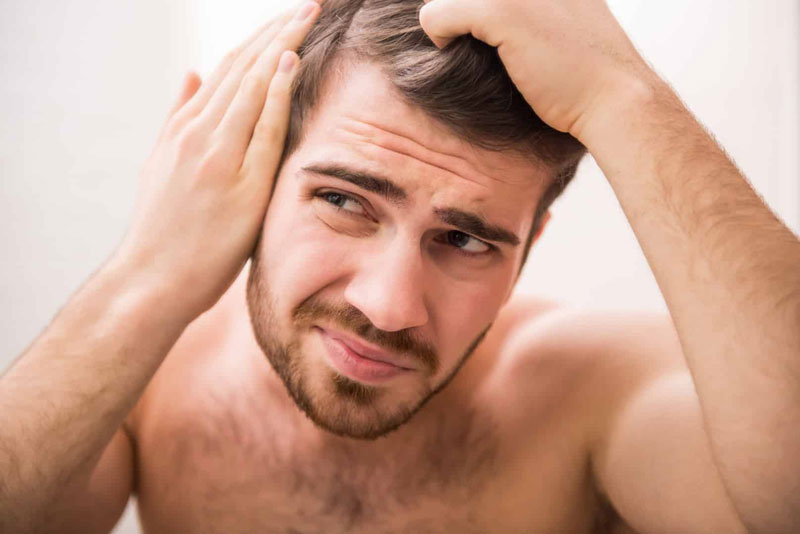 Other causes of hair loss

Male pattern baldness cannot always be held accountable for hair loss in men. Age and lifestyle also play a key part in the health of a man’s hair, which includes many factors he can control.

For example, a poor diet can cause hair loss by not supplying the body with the nutrients it needs. Sudden weight loss, low iron levels, or a diet consisting of non-nutritious foods can all result in thin hair, or worse, balding.

To combat this, men should eat a well-balanced diet of nutritious, healthy foods. He should hold protein, iron, zinc, and biotin in the highest regard, and not cancel out food groups like fats and/or carbs.

Secondly, age can seriously impact a man’s ability to maintain a healthy head of hair. However, age is inevitable, which is why many men are encouraged to embrace it. So, while age-related hair loss cannot be reversed by a new haircut or clever styling can help with self-esteem. Plus, some styles are more flattering than others, meaning it pays to speak to a reputable barber.

Male pattern baldness has a very distinctive ‘U’ shape. First, the hairline recedes, aka frontal baldness, before the crown of the head thins too. Eventually, both thinning/hairless spots join together until the ‘U’ shape forms. For some men, they may even end up completely bald.

Around 50% of all men in the United States will experience male pattern baldness in their life. According to the National Institute of Health, that’s an estimated 50 million American males.

One of the leading causes of male pattern baldness is dihydrotestosterone (DHT). DHT is five times more potent than testosterone itself and is primarily used by the body in the skin, prostate, and hair follicles.

However, it isn’t DHT itself that results in hair loss, but DHT sensitivity. Androgen receptors on the hair follicle interact with dihydrotestosterone, which causes the follicle itself to shrink. Over time the hair produced by the follicle becomes thinner as it gets smaller through a process called ‘miniaturization’. Once miniaturization reaches its final stages the follicle dies and stops hair growth altogether.

While age and stress play a part in hair loss – genetics is the biggest factor. Therefore, if male pattern baldness appears in your family, you’re at greater risk yourself.