Since the beginning of time, man has fought to be the strongest, fittest, most jacked version of himself. And that means lifting big and heavy. But is it deadlift or squat that comes out on top for muscle mass?

Unless you’re the kind of chicken-legged pussy boy that relies on bicep curls and crunches to get the girls, you’ll more than likely deadlift or squat.

Whether you’re bending bars from the floor or you’re sitting one on your traps, there’s nothing finer in life than moving heavy sh*t from here to there.

In this article we’ll use our team knowledge to tell you everything you need to know about squat vs deadlift.

Here’s your leg bible. It’s time to become a disciple…

Introducing The Squat and Deadlift

Neither of these two big lifts take any prisoners. They both involve heavy weights, big movements and a sh*t tonne of heart, drive and fearlessness.

As raw measures of strength and power you’ll not find anything that comes close. Even the bench press (which we’re huge fans of at SpotMeBro) doesn’t deserve to tug on the coat tails of the deadlift or squat.

Both the deadlift and squat have variations. You can front, back, goblet and Zercher squat. You can conventional, sumo, Romanian and straight-leg deadlift.

But by-and-large, the mechanics are pretty similar.

The squat is a push exercise. The deadlift is a pull.

To a noob, the deadlift or squat might look similar. They’ll tell you that the movement is the same, but the bar is positioned differently.

To the expert trained eye though, they’re totally different.

The motor patterns aren’t identical and mechanical movement through the range of motion isn’t the same.

In fact, there’s very little similarity at all. And it’s the different joint patterns that make each one it’s own specific exercise. 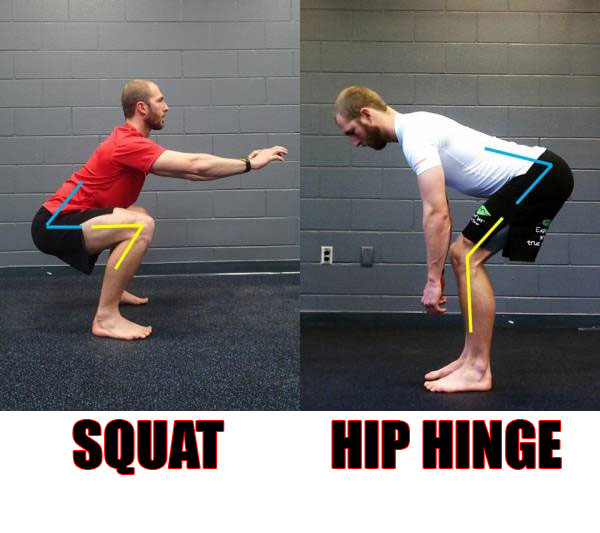 In other words, all movement is limited other than at the hip.

The squat involves a different pattern.

Squats place far more emphasis on the knee joint. It’s the focal point of the exercise, and any changes at the hip are only to allow greater range of motion at the knee.

Check out the benefits of squats in this article.

The muscles involved are different

Because the biomechanics of each lift is different, so are the muscles involved. Both develop your leg strength and mass, but hit muscles to different degrees.

Squats are knee dominant so work your quads primarily. Your glutes are involved too as a way of extending your hips. The hamstrings do activate during a squat, but only to control hip position (what’s called Lombard’s paradox).

Deadlifts hit your ‘posterior chain’ (hamstrings, glutes, lower back) more than anything else because of the hip hinge position. There’s some quad activation, but not a massive amount.

There’s an argument that being strong means being strong. And that it transfers from one lift to another regardless.

There’s not much actual data comparing ‘transfer strength’ from one to the next, but many coaches believe that good squatting improves the deadlift, more than the other way around.

In fact, a solid deadlift probably doesn’t transfer to squatting ability at all.

The answer to this question is… it depends.

If you’re talking about the amount of weight you can shift, the range of motion or grasping technique, the answer is different.

Most people can shift more load in the deadlift than they can in the squat.

So there’s an argument that deadlifts are more taxing on your nervous system.

A good deadlifting workout will take days to recover from. But a squat day is easier to recover from and will have you back at the platform a couple of days down the line.

There’s also much more potential variation when it comes to the deadlift – not so much in technique variation, but in rep range.

Heavy deadlifts are great for strength, and higher reps build stamina. Heavy squats build strength, but high rep squats are the work of the devil.

You could say that squats are tougher though if you wanted, because the bar travels through a larger range of motion, increasing time under tension. And squats need a safety rack too. The last thing you want is to come short on your last rep with no support stands to catch the bar.

Lastly, there’s a hell of a lot of individualism when it comes to which is most difficult to perform.

If you’re a short guy with long arms, you’ll eat the deadlift for breakfast. But if you’re tall, have long femurs and the arms of a T-Rex, you’ll find it tough to deadlift.

It’s the same for squatting. If you’re short and have good hip and ankle flexibility, you’re loving ass to grass squats. But if flexibility is poor, you’re in a world of hurt.

Deadlift or squat for strength?

Strength training is as popular as ever, with more and more bros turning their attention to racking up big numbers rather than just getting a pump on.

Both lifts are great for increasing overall testosterone levels. This hormone is what turns a boy into a man, responsible for ramping up strength, size, power, libido and aggression.

A dude with high testosterone is a man you just don’t f*ck with.

Bottom line is that both exercises are good for elevating testosterone and strength. They’re both by far the best strength builders in the weights room.

Both movement patterns transfer to sports. And as an athlete, they should provide the focus on your training (presuming you’re injury free and can perform each one without pain).

By adding deadlift or squat into a strength program you’ll emphasize:

Deadlift or squat for mass?

Before we look at whether one is better than the other, it’s important to realize that both lifts are brutally effective mass builders.

They both hit large muscles. Couple that with your ability to smash them with high load and even higher volume and you’ve got a recipe for gainz bro.

Bottom line – if  you want huge quads you need to squat. It’s the most superior lower body mass builder in your program.

It has a big range of motion

If you had to choose between the two, the squat wins it for building mass. While deadlifts will build muscle in your back, posterior chain and forearms, squats blow up your legs like nothing else.

Build mass with squats and deadlifts

Like any other exercise, building muscle mass is all about stimulus, overload, volume and adaptation.

Choosing weights that take you to fatigue is important.

Without activation and fatigue of muscle fibers, you can’t stimulate growth.

You can build muscle mass at all rep ranges as long as volume is high, so really try and push the number of sets and reps you perform. Just be careful of burnout and make sure you have recovery days throughout your program.

Should you deadlift and squat consecutive days?

This is a tricky one, and coaches across the world argue both sides of the argument.

Is it smart to leave a few days gap between deadlifting and squatting? or are you better to man up, get on the platform and lift?

There’s nothing wrong per se with doing the squat and deadlift on consecutive days. But because they’re so taxing, you might find that your productivity isn’t maximized.

From a physiological angle, it takes a good couple of (or even few) days for your nervous system to recover from heavy lifting. Couple that with muscle damage from higher-volume workouts and putting your squat and deadlift workouts back-to-back probably isn’t great programming.

It makes sense to squat early in the week (because we know it’s less taxing so makes sense to put in first), followed by deadlift towards the mid-end of the week.

There’s also the argument that two heavy, stressful workouts each week will soon build up accumulative fatigue and leave you feeling consistently tired.

As the big two, the squat and deadlift are guaranteed to ramp up your strength, muscle mass and explosive athletic power.

Whether one is better than the other is like asking whether you’d rather f*ck Jessica Alba or Mila Kunis. You might have a preference, but you’ll have a good time with either.

While the squat hits your quads and glutes, the deadlift challenges your posterior chain through hip hinging. Essentially, one is a push and the other is a pull.

You can use these two powerful movements to build strength and power for athletic performance, or mass as a bodybuilder. They’re about as versatile as you’ll get.

What Is the Third World Squat? And Why You Should Be Doing It