The leg curl is a clear winner for etching out a pair of dominant, powerful and god damn glorious hamstrings.

A well-sculpted, awesomely-balanced physique is more than just a barrel chest and jacked arms. Even if you don’t ‘skip leg day’, chances are, your leg mass lays on your quads.

Training your hamstrings shows attention to detail. It boosts athletic performance. And it also decreases your chances of injury when you’re training legs or hitting the pavement for a hard sprinting session.

In this article though, we give you the full-force science of hamstring training.

About The Hamstrings – Leg Curls for the Girls

When you’re in the bar and some hot cheerleader asks you to tense your muscles, you’re going to throw her a double biceps or maybe a moist muscular (a most muscular that gets that pussy wet).

Chances are you won’t give her the leg contraction and show her your hamstring mass. But you definitely will do once you get familiar with these posterior muscle building exercises that isolate the hamstrings and balance your leg strength.

The hamstrings are actually a group of 4 (very hard to pronounce) individual muscles. They sit on the back of your thigh, just under your ass and above your calves. 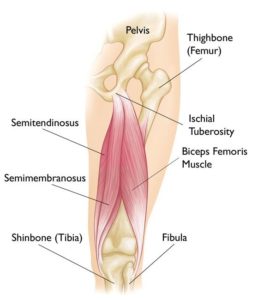 What functions do the hamstrings have?

Your hamstrings are one of the most complex muscle groups in your body. The four muscles are often divided into two specific groups:

This specialized grouping allows the hamstrings to have more than one function.

The biceps femoris long head, semimembranosus and semitendinosus all cross both the knee and hip joints. This allows two specific movements to occur when the hamstrings are contracted:

And it’s the leg curl that we’re breaking down in this article for you. 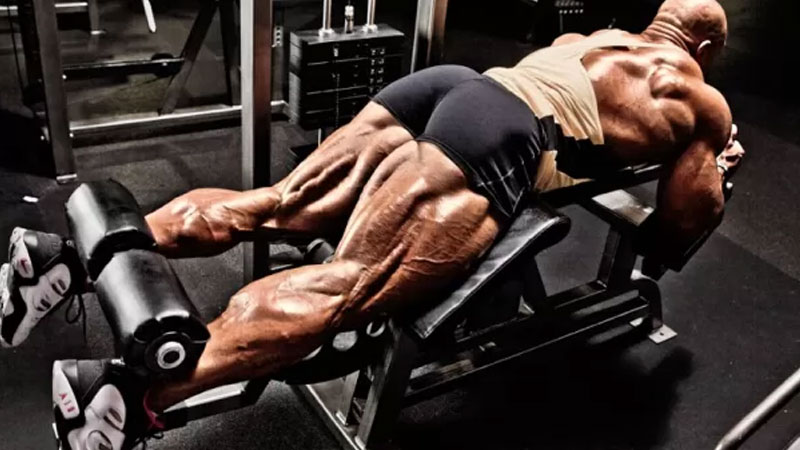 The Hamstrings and Sports Performance and Muscle Gain

Well-rounded athletic performance is about synergy between muscles. Just one weak link can create huge imbalances that affect power, strength, skill, and longevity.

Type 1 (slow twitch) – these are small in size and strength. They can’t produce much force because their activation or ‘twitch’ speed is slower than other fiber types. Type 1 fibers are used during exercise that focuses on endurance with lighter loads.

Type 2 (fast twitch) – these are higher in strength, power and force potential because they are larger in size and can contract fast. These fibers have a big potential for muscle growth and are used during more intense workouts with heavier loads.

As we’ve seen from our article on bicep training, fiber type should command how you train a muscle.

The hamstrings have a roughly even split between type 1 and 2 fibers.

And some athletes have shown up to 67% type 1 fibers.

So, what does this mean for training?

You should spend an even amount of time on lighter weights at high reps, and heavy loads for low reps. You should also train at high speed and slower speeds for optimal strength and muscle growth.

Just the tip: To effectively train your hamstrings you should vary rep range, loading and rep speed.

Scientists have shown that the ratio between your quad mass and hamstring mass predicts your sprinting speed.

If your quads are strong but your hamstrings are non-existent, your top speed will be somewhere between your grandmas walking speed and that of a stoned sloth.

The bottom line is that if you want to get faster you’ve got to train both sides of your legs.

Hamstrings injuries are high in athletes who don’t take the time to bulletproof them with the right exercise program.

One research project found that injuries to the upper posterior leg muscle account for as many as 15-16% of injuries in team sports. Most of these were during high-speed running.

Leg Curl Exercises to Get Jacked

If you want napalm-proof legs that are powerful, strong and injury-free, you need to best exercises in your arsenal. 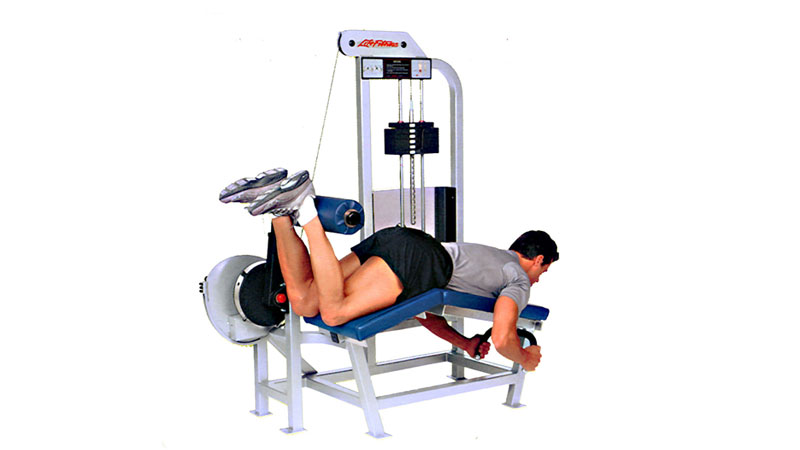 Get your ass in the air and build some huge hamstring mass.

This old school leg variation is gaining popularity again as the go-to exercise for building hamstring mass. It’s the priority exercise for any serious lifter.

Lie with your hip crease at the highest point of the bench. Your quads and chest should be supported, and when your legs are straight, the roller pad should sit against your Achilles tendon.

Curl your heels towards your glutes, using a constant speed and a strong mind-to-muscle connection.

Aim to make the range of motion as large as possible – literally try to kick yourself in the ass. Don’t arch your back or let your chest leave the supporting pad though.

Slowly lower the weight under control to full extension and go again for the desired number of reps.

Just the tip: There’s a muscle behind your knee called popliteus. It unlocks the knee when your leg is straight so that the hamstrings can do their job. To train this muscle you should start each rep with your knee fully extended. 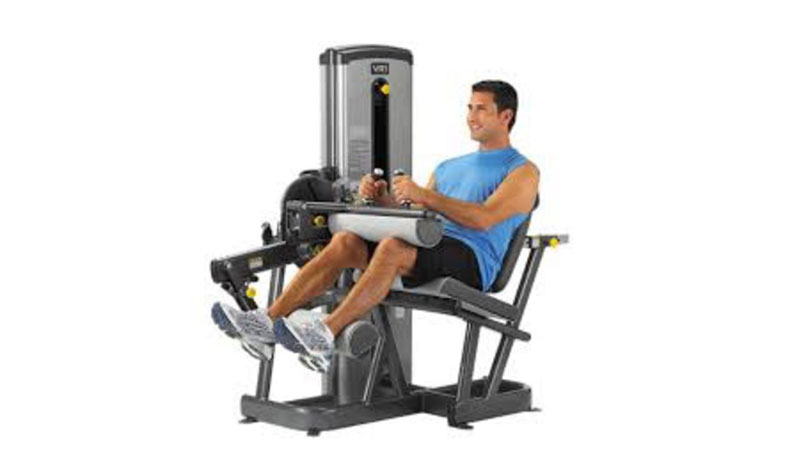 It might feel strange sitting on the muscle you’re training… but this is a great leg curl isolation exercise for your hamstrings.

The key to using this machine successfully is getting the mid-point of your knee in line with the pivot disc (usually colored so you can see it). Adjust the seat to the right position and make sure the roller pad sits against your Achilles tendon.

Most seated leg curl machines have a stabilizing pad that locks your body in place. If it’s got one make sure you use it as it helps to isolate your hamstrings.

Start with your legs fully extended and parallel to the floor. Drive your lower leg back against the roller pad and bring your heels as close to your glutes as your range of motion will allow you.

Control the weight on the way back to full extension and complete a full set of solid reps.

Just the tip: Try different rep speeds and rep ranges to target the different muscle fibers. The seated leg curl works well for explosive reps as your body is in a fixed position throughout. 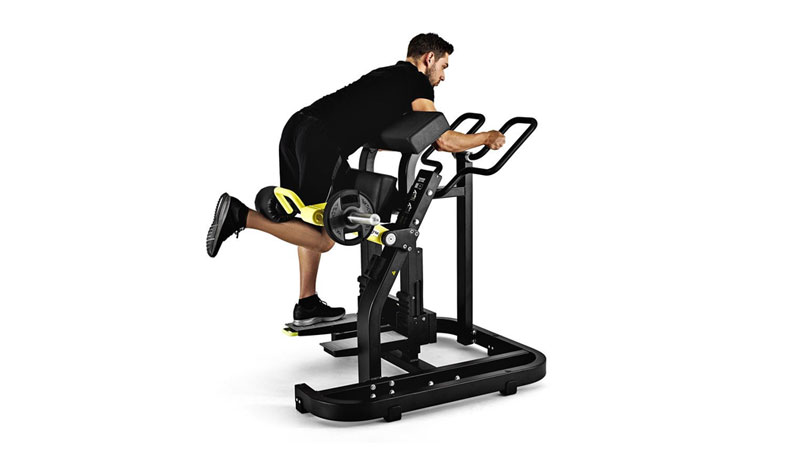 It might look like the kind of exercise that Instafamous basic b*tches use to get booty likes, but standing leg curls are a surefire method of bulking your hamstrings.

You don’t tend to find this one is as many gyms as you’d come across a seated or lying leg curl. But if you do, use it – it’s a great isolator in a more natural position.

Set your knee in line with the pivot disc and the roller pad in line with your Achilles tendon. Because you don’t have a seat or backrest to set your hips against, it’s important to get your body in the right position.

You’ll get the most range of motion during knee flexion when the hips are in flexion (slightly bent over). So lean into the machine rather than standing up straight.

Like all leg curl variations, try to pull your heel as near to your butt as you can to get a strong, full range of motion.

Just the tip: It’s rare in sports performance that you’d contract both hamstrings at the same time. Using single leg hamstring work helps to mirror dynamic movements such as running and cutting. 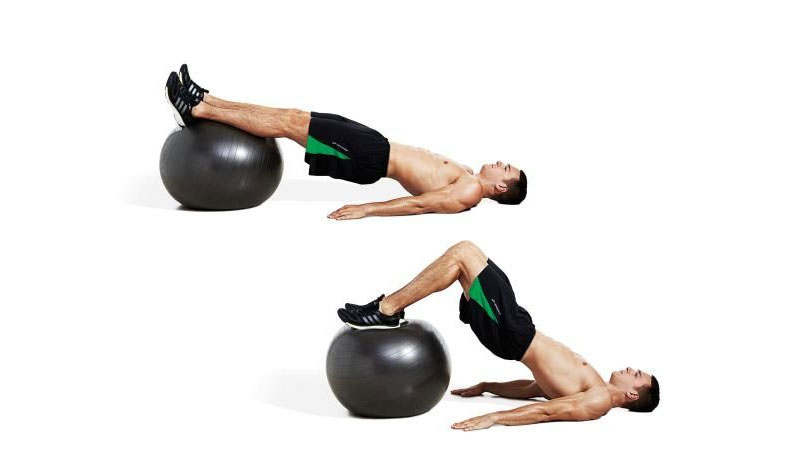 This one looks easy but will set your hamstrings on absolute fire.

to an extent, it doesn’t really matter what size ball you use. But bear in mind that if it’s too large you’ll struggle to hold position in a glute bridge.

Place both heels on the ball (you can lift your toes off the ball itself if you want to) and lift your glutes and lower back from the floor. Your shoulder, arms, and head should act as stabilizers for balance.

Start with your legs fully extended and then roll the ball as close to your body as you can, in a slow and controlled manner.

The idea is to isolate the hamstrings, but maintain balance.

Keep your hips high as you roll the ball back out to a fully extended start position. As soon as your touch your glutes on the ground you’ll lose hamstring activation.

Just the tip: The ball works well to fire up your core. You’ll be off balance for the first few reps if you’re new to this one, but stick with it for a deep hamstring, trunk and glute burn.