The bench press is a king among jokers when it comes to barbell exercises. There’s nothing much else that measures a mans raw strength quite like it. No one gives a sh*t what you’re calf raising, bro!

Pressing a weight is primal. The load either moves successfully, or it doesn’t. There’s no need to attach HR monitors, or saddle yourself into a fancy piece of machinery.

So, it’s no shock that presses have been around for years. Each culture has their own history of strong man training, and you can bet to find a press in there!

Today we use the bench press as a versatile training exercise. Throwing it into the programmes of all athletes from bodybuilders to MMA fighters.

At higher reps with a lower weight it’s an awesome chest building hypertrophy building tool. But, drop down the reps and bump up the load, you’ve got a killer power move! There’s a reason powerlifters compete in the bench press and not the ab roller.

History of the Bench Press 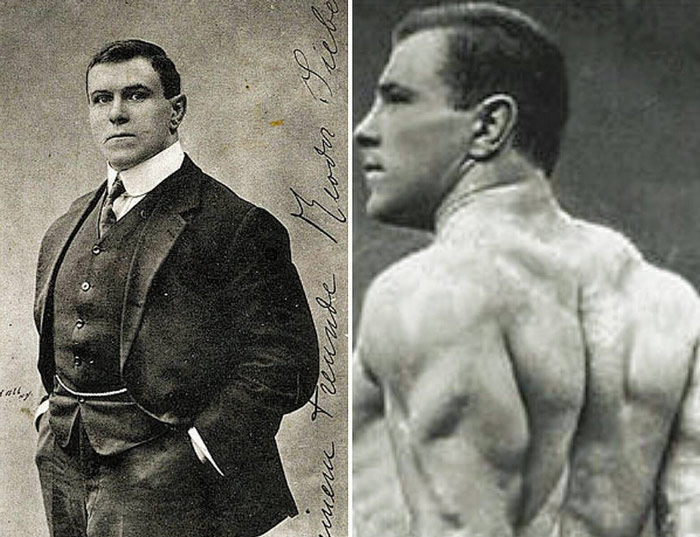 According to almost all evidence the origins of the modern bench press began in 1899.

Before weight benches even existed the ‘Russian Lion’, George Hackenshmidt decided to raise the bar (literally) by completing the first ever recorded floor press. Positioning himself under a 350lb plus bar, grabbing a-hold of it and then pressing outwards from the floor.

You’ve probably worked out George Hackenshmidt was a pretty gnarly dude. Not only was he strong as sh*t, but he was also a truly world class wrestler. Being crowned Heavy Weight Champion of The World in 1904 and retaining the title for 1,065 days.

Hackenschmidt was a key figure in changing the world of weight training. Having invented both the Hack Squat and breaking the bench press world record.

In an interview that took place in 1911, Hackenschidt was recorded saying: “A man may secure and maintain a condition of fair physical fitness by means of exercising without weights … but he cannot hope to become really strong unless he exercises with weights.” 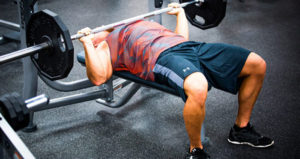 The bench press typically targets the top half of the body. More specifically, the chest, arms and shoulders.

Bro, chill! We’ll get to the individual muscles and groupings later. For now we’re just gonna look at what the f*ck is going on when we press.

By using changing up the bench with different grips we can target these groups more specifically. However, this ain’t a one cowboy gun show. Utilizing different set ups will still work multiple muscles, which is great for improving functional fitness.

You never know when you might just have to throw an angry bear off your chest. 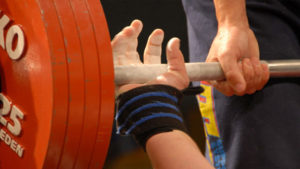 The grip we use when we bench ultimately determines which muscles work the hardest. Meaning that taking a different approach to your press positioning could seriously accelerate chest development.

There is a fifth variation known as the suicide grip (false grip) but almost every expert out there swears against this style. Mainly because the benefits don’t outweigh to the dangers of potential death. Don’t do it, bro. 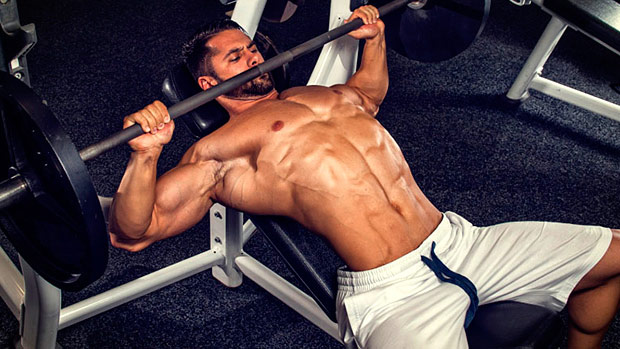 This style of holding the bar is the standard method used in gyms all over the world. Chances are, if you’ve done any kind of benching you’ve used this grip already.

According to The American Council on Exercise, the hands should be slightly wider than shoulder width. You’ll probably notice this is where you’ll find the portion of the bar modified for better grip.

A basic set up position such as this one is a happy medium between the tricep busting close grip and powerlifting wide grip.

You may not be able to move as much weight as with a wide grip, but your shoulder joints will thank you for it.

Use the basic set up to work your pectorals, triceps, latissimus dorsi and the anterior deltoids. 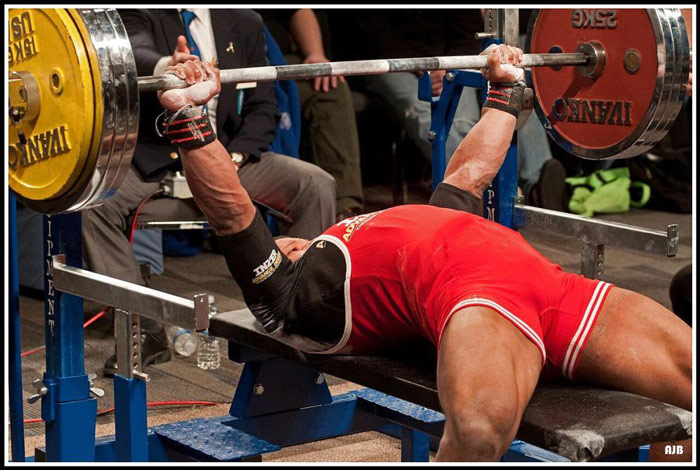 The wide grip is pretty easy to get your head around, because the perpendicular arm angle makes the lifter look like a giant “W” shape. Well, if seen from head on that is.

Because of the shorter distance the bar has to travel, dudes using this set-up can usually press a heavier load. It’s the go-to grip for powerlifters, who can often be spotted riding their index on the outside ring.

This wide grip approach is ideal for igniting the outer pecs (sternal head of the pectoralis major) and lower pecs (pectoralis minor). The greater distance between your hands will also better engage the latissimus dorsi.

As with any kind of grip variation, there’s always gonna be some sacrifice. This particular positioning won’t work the triceps as much as other grips and will also place the most pressure on the shoulders.

If your main objective is to build power, implement the wide grip into your routine. But, if you’ve got shoulder trouble, don’t be a hero. 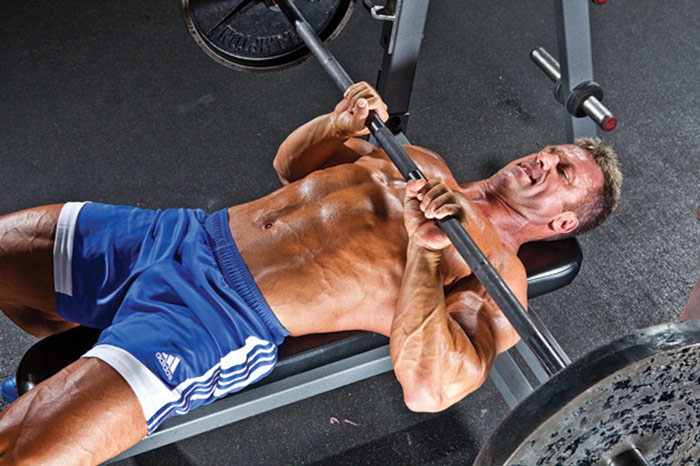 Taking a close grip on the barbell whilst benching is great training for the arms. More specifically, the tricep brachii.

This is because the bar has to travel further than any of the other variation to the top. Calling upon the triceps to handle more load and offer stability within the movement.

The inner chest is also brought into play, meaning it’s a great grip to tag on for maximum upper body hypertrophy.

So, if you’re a man all about putting some mass onto those chicken wings, keep it close. Set up your hands just inside shoulder width and without touching your thumbs. The myth of having touch thumbs is just bad bro science.

You’ve probably seen a lot of bodybuilders with this kind of super narrow grip, but touching the thumbs is dangerous. It puts more stress on the wrists and significantly raises the risk of injury.

The close grip is also an awesome accessory tool for building a better all around bench. Which is cool, right? B*tches love big-ass bar-bends. 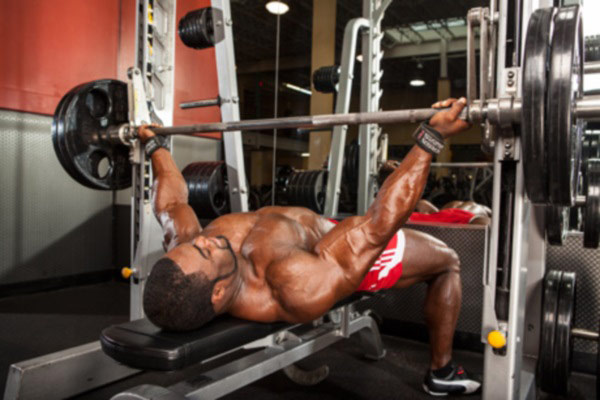 The reverse grip looks like some serious newbie sh*t. It’s the kind of thing you see groups cardio bunny’s doing on their first day cluttering up the weight room. But, before you stroll over with those Judy Dench guns blazing to lay down the law, hear us out.

According to Jim Stoppani, PhD, “The reverse grip helps keep your elbows in and your upper arms parallel to your torso. Moving your arms in this manner increases the use of the upper pec muscles.”

To utilise this set-up grab the barbell using an underhand (supinated) grip at the same distance of the basic grip. Thumbs should be wrapped around the bar.

Summing It All Up

By learning these essential grip variations you’ll be able to get four chest attacking approaches instead of just one old faithful. Mixing up your approach this way will strengthen areas that don’t usually get much love with the basic grip.

Plus, changing it up every once in a while helps to keep training challenging. If we just wanted to do the easy sh*t we’d be in the step class with grandma.

So, get to grips with these four and you’ll have the next CrossFit dude that asks “What you bench, bro?” trembling in his headband.

What Is the Fitness Fatigue Model?