You know it and we know it too… bicep curls are the ultimate exercise for arm mass.

There isn’t a bro alive who wouldn’t want an inch or 5 added to their guns. And in this article we give you the tools to get there.

Forget about sparkly eyes, a pearly-white smile or a fresh pair of kicks. It’s your huge pair of solid, vascular biceps that’ll get you noticed with the women first.

It’s the secret to getting the girls’ panties sploshing on the floor with the same quick ferocity of a burst water main.

Jacked arms tell a story – one of a dude that lifts big, trains hard and could probably smash through a brick wall like One Punch Man. He has a don’t-f*ck-with-me attitude. And if you do choose to f*ck with him he’ll straight up use that arm power to grapple you to the floor and smash the sh*t out of you.

This is all about arm training. Welcome to the game…

All About The Biceps

Much like the mythological animal Orthrus, the biceps brachii (bray-key-eye) is a two-headed monster. Only your bicep doesn’t guard Geryon’s cattle – it lets you curl god damn heavy ass weights instead. 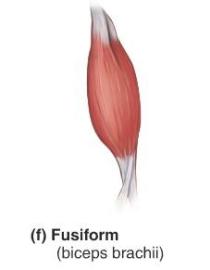 Forming one collective unit, your two bicep muscles live on the front of your upper arm between your elbow and shoulder.

They have two distinct primary functions:

Your biceps also have secondary functions too.

These include 3. shoulder flexion (bringing your arm out in front of your body) and 4. horizontal adduction (taking your arm away from your body when horizontal to the ground).

The biceps are what’re classed as a fusiform muscle.

The muscle fibers run in practically a straight line from one end to the other. This is different from more multi-pennated muscles such as the rectus femoris and posterior delt.

The two muscles that make up your upper arm have their own functions, but also synergistically.

The short head of the biceps attaches onto your coracoid process (a bone up in your shoulder/scapula area).

The long head attaches onto the supraglenoid tubercle of the scapula (another part of your scapula, behind where the short head attaches).

Both muscles then merge at the elbow to share a common insertion point.

Bicep fiber type affects how you target it for muscle growth

Every muscle has a different proportion of fast twitch and slow twitch fibers. As such, there’s an argument that each individual muscle should be trained differently to get optimal results. 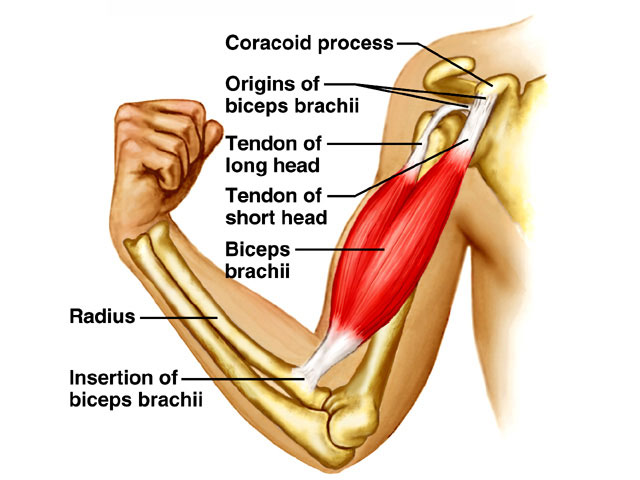 According to research, the biceps of bodybuilders are on average 40% type 1 and 60% type 2.

Remember, genetics plays a large part in this and these numbers are only an average – but it does give you a rough idea to work with.

What does this mean in the real world of the gym bro?

Type 2 fibers are recruited with both higher loads and at higher speeds. If you want to trigger massive growth from bicep curls you should go heavy – 6-8 reps for the majority of your training.

And use higher rep ranges less frequently to pick up the slack of lower force muscle fibers and get a muscle-swelling, sick pump from time to time.

Any exercise that flexes your elbow under tension will activate the fibers of your biceps.

Whether that’s a pulldown or row, chin-up or curl – there are hundreds of ways to grow your ARMory.

However, knowing more about how the bicep heads function allows you to draft the very best exercises into your program.

And if you want to take your arm growth to the next level you need to add in bicep curls. That way you can isolate the muscle much better, and use tricks such as mind-to-muscle connection to your advantage.

Curling One Out: Bicep Curls for Huge Arm Mass

Now it’s time to take a detailed look at the very best arm flexor exercises to jack up mass and take you up a shirt size or two.

These are bicep curls to get you in the game… 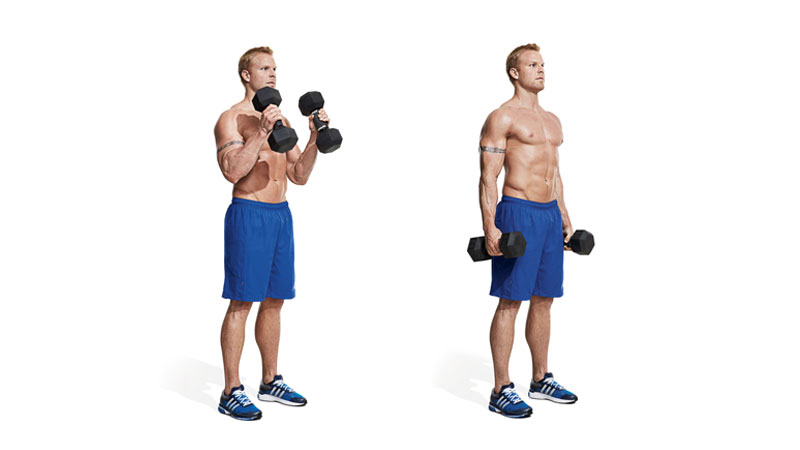 The standard bicep curl is what Greek gods used to chisel granite-like arms that could tear a man in half…. maybe.

But in all seriousness, this is a great starting point for anyone wanting to add arm mass as it involves both key movements – elbow flexion and forearm supination.

Stand with your feet hip-width apart and your arms relaxed by your sides (holding a dumbbell in each arm obviously, dumbass).

Your elbows don’t need to be locked into your side, but they do need to stay fixed. As you begin curling the dumbbell upward, start to rotate your thumb out and away from your body. This added supination makes the movement more complete.

Once you’re at the top, make a super-loud grunting noise to p*ss everyone off. And then lower the dumbbell back to the start position.

You can perform this exercise as an alternate curl to focus on technique, or both at the same time to get it done faster.

Advanced Bro Point: For an added stimulus, lift your elbow at the end of the movement so that the dumbbell comes up right in front of your face. The addition of shoulder flexion will set fire to your bicep long head. 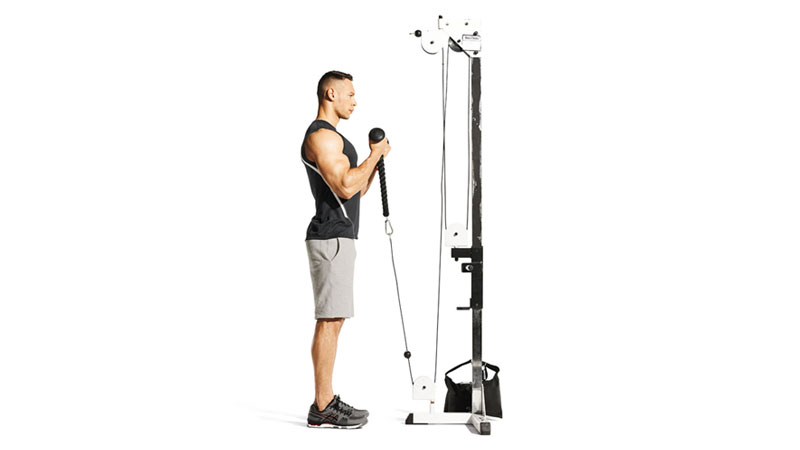 The standing bicep cable curl might look like a standard bar curl. But the addition of the cable adds a whole new dimension to your quest for arm growth.

Set the cable column to the lowest setting and stand in close (but not too close or you’ll catch your pecker in the machine bro).

Grab the bar attachment at around shoulder-width with a palms-up grip. Pull your elbows in line with your hips and keep them in a fixed position as you bring your wrist to your shoulder. Slowly lower down until your elbows are extended at the bottom of the lift.

Try mixing it up by trying an EZ bar, rope or stirrup handles for a different challenge.

Advanced Bro Point: To really feel your biceps light up, try the cable drag curl. Pull your elbows back and literally drag the bar up the front 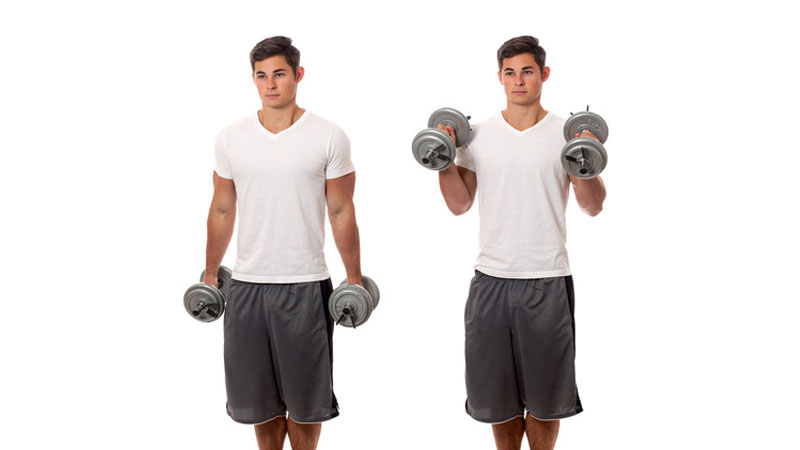 In terms of hammer curls vs bicep burls, this one is all about the long head.

A hammer grip sees your palms facing towards each other like when you shake someone’s hand… or when you, erm, hammer a nail.

Because of the neutral forearm position, the short head can’t leverage as much as it would like to. This forces the long head to step up to the plate and take the brunt of the load.

Maintain this position with your elbows fixed. The range of motion might be limited compared to standard curls at the top end of the exercise, especially if you already have huge arms. But other than that, it’s pretty much the same as any other curl.

Advanced Bro Point: Lean into the curl from your waist. This maximizes tension through the range of motion, but will hurt like a muthaf*cker. 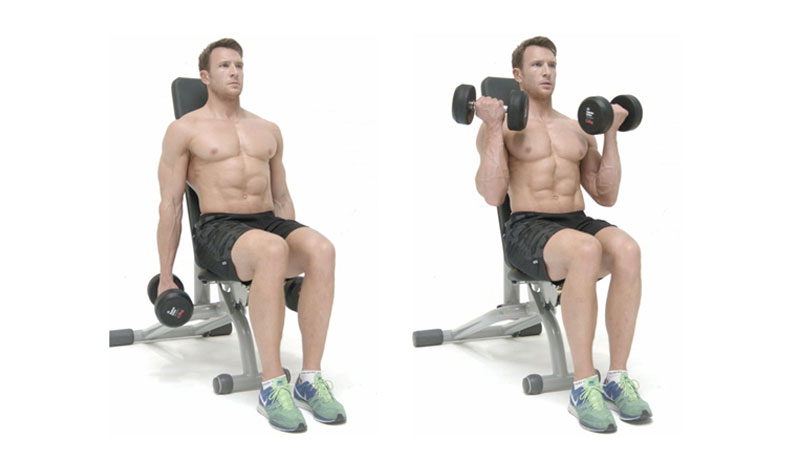 Although the most fun things in life often involved being laid down, seated stuff can be pretty cool too.

Set a bench in the upright position. Grab a pair of dumbbells and let them sit by your sides in a neutral position.

With a fixed elbow, curl the weights towards your shoulders, taking a good 2-3 seconds. Pause briefly at the top and then take the same amount of time to lower them back down.

This one is all about control and mind-to-muscle connection.

Advanced Bro Point: To focus on the upper half of the movement you can rest your knuckles on your quads at the start position, taking the bottom half of the lift out of the equation. Sounds easy, but we guarantee you it isn’t. 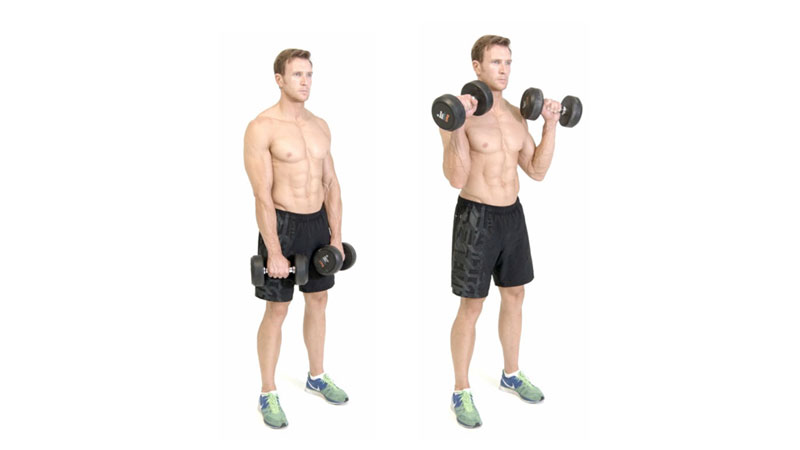 You can do this with either a bar, dumbbell or the limp and lifeless corpse of the last vanquished noob who dared to mess with your dumbbells.

Much like the hammer curl, the reverse bicep curl hits your long head bicep with a vengeance.

Hold your upper arms stationary so that your upper arm is in a fixed position. Bring the weights up to your chest in a slow and controlled manner. Lower them back to the start position slowly.

The position of the weight and your forearm makes it tough not to drop the weight towards the floor. But the reverse bicep curl is phenomenal for building tree trunk forearms that look masculine and imposing.

No limp wrists here, please. It’s all about keeping things solid and strong throughout.

Advanced Bro Point: Try Zottman curls. These are where you grab a dumbbell and curl upward in a supinated position like a standard curl, and then rotate your wrist into a reverse bicep curl at the top and then lower under tension. 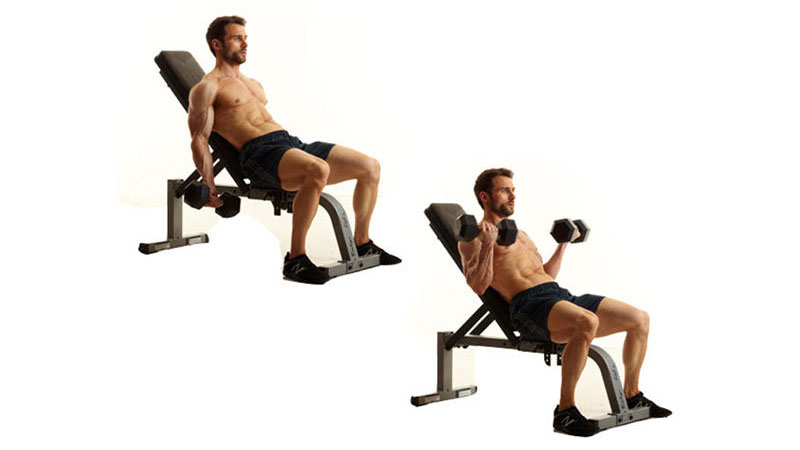 This seated curl variation is horrible and fun in equal measure.

Grab an incline bench and set it somewhere between 45 and 60 degrees. The lower down it goes, the harder your front delts have to work to hold position, so bear that in mind.

The technique is pretty much the same as the seated bicep curl. The big difference here though is that you’re purposely trying to keep your elbow slightly behind your rib cage in order to keep the tension on your biceps.

It’s much harder than a seated curl as you have to fight against gravity much more. And gravity is a b*tch.

Keep the pace slow and controlled and feel that acid bath burn build up fast.

Advanced Bro Point: Here’s a weird one for you to try – the spider curl. Keep the bench around 45 degrees but lay on it with your stomach so that you’re facing the floor. Curl from there and call us motherf*ckers as you realize fast that SpotMeBro are not nice people for giving you this disgusting muscle mass exercise.

Liked this article? You’ll get a real boner for these advanced arm building articles:

How to Get Bigger Forearms and Wrists - Godlike Arm Workout