If you want to carve out shoulders like the Austrian Oak you need to read this article, hit the gym and watch those delts grow like m*thafuckers brah.

We can’t lie. We still have a huge poster of Arnold up in the office here at SpotMeBro. And by office, we mean gym.

It’s a constant reminder that if you want to look like the best, you’ve got to work as hard as the best.

Forget the pretenders with their growth guts, pouts and perfectly shaped eyebrows. My man Arnold was the best there ever was.

See, the old school guys knew how to train. And even the scientists are now agreeing that for all of the tiny shorts and stringer vests that were popular in the 70’s, these guys knew how to build mass.

No one bodybuilder that’s ever tanned up and walked on stage has matched the pure angles and aesthetics that Arnold had.

Whether it’s his classic physique that showed muscularity, proportions and symmetry, or his confident, poetry-like posing, he had it all.

And one of the muscle groups that really put Arnold apart from the others was his massive delts.

If you’ve ever watched Pumping Iron you’ll have seen Schwarzenegger’s approach to muscle building. High-volume, heavy weights and blasting each of the three deltoid heads with equal ferocity.

And now you’ve got access to the same approach and workouts.

Bro Note: if you haven’t watched umping Iron yet, get off this page right now and go watch it, then report back… because you’re not worthy of being here if you haven’t.

Arnold was clued into proper shoulder training right from the beginning

They spent hundreds of hours trying different techniques and crafting their art.

If something didn’t work it ended up in the bin. If it did work, it stuck. Hard.

The bros really knew what made the delts tick, even if they couldn’t nerd it out in a research journal or biochemicals symposium. 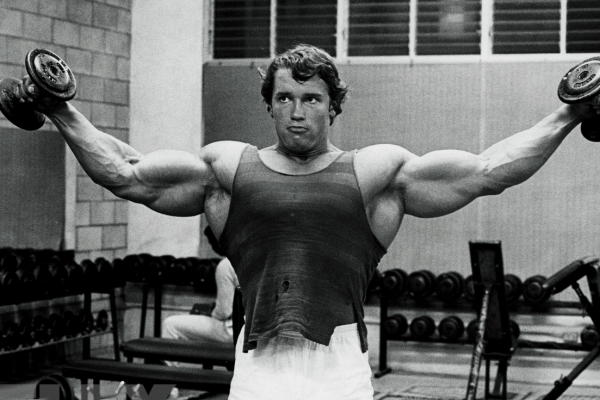 We know now that because of the types of muscle fibers in the shoulders, they respond best to a mix of rep ranges, heavy weight and high volume.

And this is exactly the principle that Arnold followed.

Using different reps rages, number of sets and playing around with overall training volume allows you to target every single muscle fiber in your delts.

Don’t just stick to the same workout over and over again.

You need to vary the angle to build boulder-like caps

If all you do is rely on one single exercise to etch out eye-melting delts you’re going to be disappointed.

Your shoulders are made up of three single muscles or ‘heads’.

It’s important to filter all three movements into your training if you want to maximize muscle mass. Presses are great for the anterior head, lateral raise and upright row variations will annihilate your medial head, and reverse flyes and rows will have your delts popping like the man himself.

The old school approach that bodybuilders like Arnold used was all about sticking to what worked best.

It’s not the circus.

Instead, we want you to stick to tried and tested exercises that maximize bang for your buck.

A basic plan of exercises that target each head of your shoulders will give you some real growth. But to see that mutha blow up you need to attack your muscle fibers with skills that Arnold knows how to implement better than anyone. 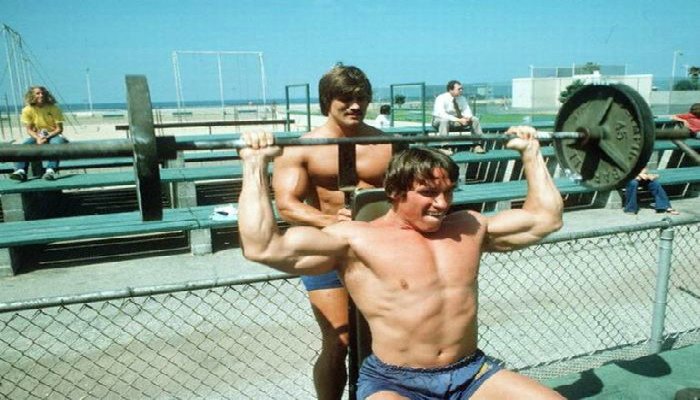 Use a ‘down the rack’ approach to blow up your delts

Not many people know this, but it was during the time when Arnold was training with Franco Columbo that they discovered drop sets.

This is where you train to failure on an exercise like the lateral raise, but rather than resting and recovering, drop the weight by 5 pounds or so and carry on again with a lighter weight. You then drop again, and again… until your delts feel like they’ve just been torched in acid.

It’s definitely not for pussies.

They referred to it as ‘down the rack’ as they’d literally start at one end of the dumbbell rack and work through each weight until they ended up right at the little pink dumbbells usually reserved for weak a$$es and cardio bunnies.

Try tri-sets to torch your shoulders

Another technique that The oak threw into his training schedule was tri-sets.

He used heavy overhead presses to failure, followed by upright rows and high-volume lateral raises. This was done with no rest in-between.

The lack of oxygen from the huge total volume results in lactate levels so high your muscles will receive a pump like you’ve never seen before.

It’ll be a beautiful sight to behold. 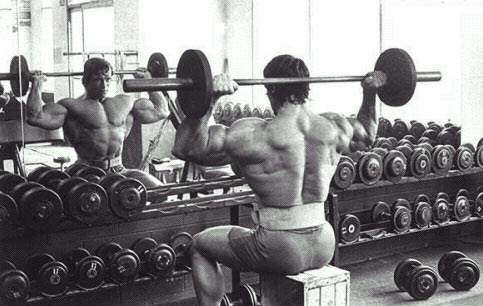 With this shoulder workout you’ll soon carve out delts like the legend himself, Arnold Schwarzenegger.

Life heavy and lift with high volume. Don’t skip workouts and live the life of a lifter.

That way, no obstacle will terminate your journey to huge gainz.

Ball shrinkage and testosterone injections - should you be scared?

Pre Workout Pills Vs Powder | Which One For The Best Results?