Obstacle course racing has become a worldwide fitness phenomenon over the past decade.

It’s leapt over flames, plunged icy waters and crawled under barbed wire to land on the bucket-lust of many an athletic bro.

It’s like we’re obsessed with asserting our manliness by running really far in insanely difficult conditions. You know, that real alpha male sh*t.

OCR requires a level of strength, stamina and agility that most regular bros don’t naturally possess. Unless you were born with actual real life tiger blood in your DNA of course.

So, in order to get ready to do battle with an obstacle course race a dudes gotta get in shape. Like, serious Tarzan swinging through the trees shredded. 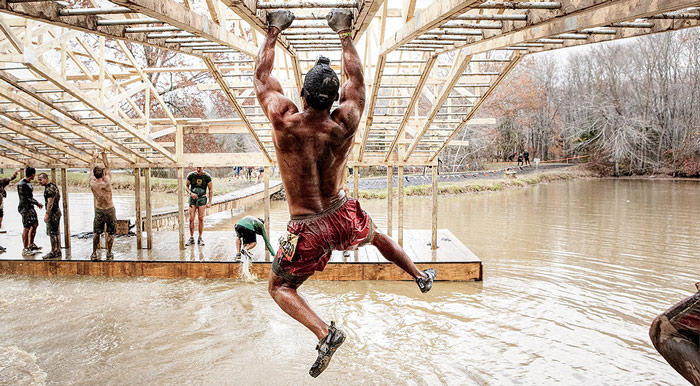 In the wise old words of Benjamin Franklin; “By failing to prepare, you are preparing to fail.” Meaning you gotta know what you’re gonna face out there on the course.

Almost all organizers vary their set-up from year to year. So, a bit like training for The CrossFit Games, you’ve got to be ready for anything. Well, almost anything.

Most races are built using a staple set of obstacles that are included in pretty much every event. Therefore, you can bet your last dime you’ll be doing some kind of:

The big names in OCR such as The Reebok Spartan Race, Tough Mudder and Warrior Dash all like to throw in their personal (insane) touches too. Here’s a few things past competitors have faced in previous years: 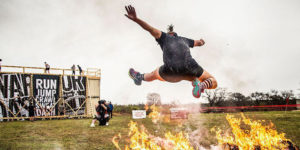 So, as you can see OCR racing ain’t no walk in the park with Grandma. It’s some real badassery only to be taken on by actual bros.

Under preparing will leave you face down in the mud whilst Judy Denched middle aged ladies use your puny frame as a raft. Don’t say we didn’t warn you dude. 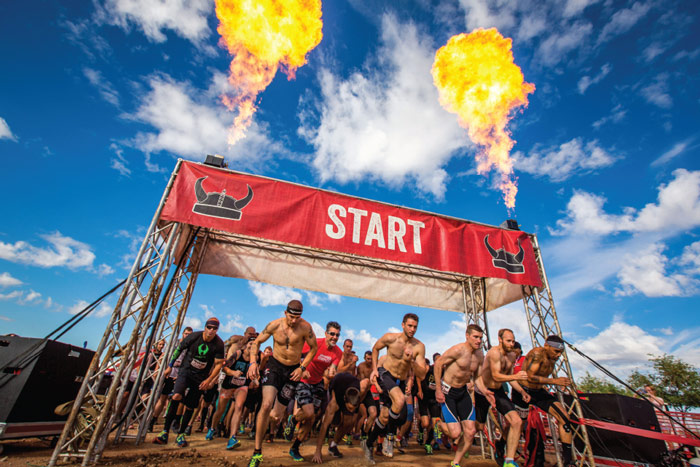 Not all OCR’s are created equal. Not by a dirty sweaty rope-burned mile.

The Spartan Race, which holds over 200 events in 30 countries, varies in length between 3-14 miles. Each type is designed for a single purpose, such as the 30 mile 60+ Ultra which is said to be “only for the brave few” to the kids race.

Tough Mudder also varies in length between the Tough Mudder 5K to the World’s Toughest Mudder. The latter being a 24 hour endurance race where crazy sons of a b*tches repeatedly tackle a 5 mile circuit containing 20-25 obstacles.

When asked about newbies training, Atkins said; “Focus should be on general fitness, some work on their grip strength, but mostly on running. Don’t forget to run.”

Given the length of each course and the desire to finish in the fastest time possible, we gotta put those pins into practice bro! 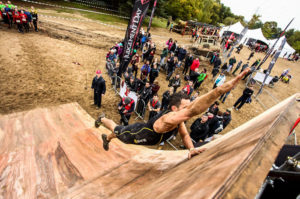 Beginners should focus on building a solid foundation of overall fitness. First and foremost, this is the most important thing. Then, everything else can follow.

Whilst many dudes first thoughts would be to go smash the iron, Atkins advises otherwise. He says; “I think people train too much for strength at these races. Especially if you’re a guy.”

Two to three days work building strength will be enough to traverse any bro through an average OCR. Especially if that guy has spent the time to master his own bodyweight and learnt how to climb with muddy feet. 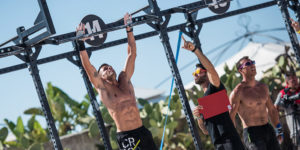 When in the gym, try to focus on functional fitness. Essentially, anything that can be applied to real life movements such as:

It’s also super important to work on your mental toughness. That’s why we have included a bunch of hard ass moves for time and not reps.

The following exercises have been chosen to get you as ready as physically possible to the tasks ahead.

Using the knowledge we have from previous popular events, we can build our workout routines to fit our unique race needs.

This ain’t your average bro split, this is the real sh*t. As OCR demands it’s competitors to be complete, well conditioned athletes, without even a chink in their armour.

So, to quote another great man, in the words of John McClane; “Welcome to the party, Pal!”

Remember, make this session fit your own needs and routine. 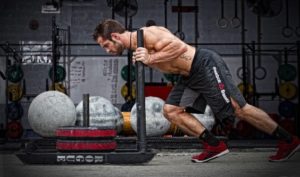 This workout can be completed between two to three times per week. That way you’ll have plenty of opportunity to fit your runs in, without risking over-training.

You may notice there are no set weights thrown into the mix here. That’s because the weight should be completely catered to suit you personally.

Aim for a load that is challenging but allows you to complete the full rep range. For example, load the prowler with enough weight so that the push and pull are tough processes.

However, if you find can’t complete three complete reps fresh, maybe lower the load. Ain’t nobody gonna record a killer race time if they’re burnt out by end of week one.

The pull, crawl and push in Group 1 should all be done for the length of prowler turf in your gym (typically 20-25m).

But, if you don’t have access to a defined measurement of length, use the length of the thick pull rope. Keeping track of a fixed length will help you measure your progression and keep reps honest. 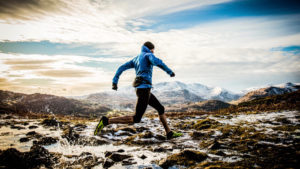 OCR World Champion Thomas von Tonder knows how hard it can be to find the golden ratio of lacing up to lifting. Saying, “one of the hardest things to execute in OCR is to balance the demand for strength in running.”

So, you may notice our workouts don’t contain specific running distances. Trust us, there’s a reason for this.

No, we’re not actually afraid of cardio like some would have you believe. We sometimes take the longer route from the bench to the leg press to check out the honeys. You know what we’re talking about.

They get so wet when we walk out from under the bar we call our biceps Swan Lake.

The reality is, we don’t know how long the race you’re about to enter is. However, we know for sure you should be building up your runs in the months leading up to the event until you can run for the whole distance uninterrupted.

Based on a moderately intense 10 mile course, a realistic 2x per week progression could look like:

This breakdown is based on a beginner who isn’t currently partaking in any longer distance running. For an intermediate bro, this frequency could be pushed to 3x per week. But bro, try to split up your run and gym days. Let that body get the rest it deserves. 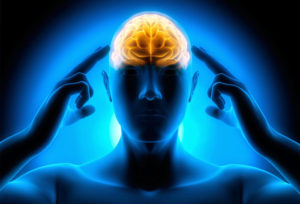 Mental toughness is a term thrown around wildly in the sport and fitness world. We talk about marathon runners, MMA fighters and elite bodybuilders as people who all possess mental toughness.

Maybe you’re sat reading this thinking about where your own mental self sits on the scale. That’s good, because when it comes to crunch time you need to know you won’t be beaten by any barrier. Especially those inside your own head.

The good thing is, no matter where your current mental game is at, grit and determination can be developed. Just like a muscle, your mind can be pumped and prepped into a lean machine optimized to perform.

Elite MMA fighter and Green Beret sniper Tim Kennedy says. “Everything you want is on the far side of hard work.” Which is a great quote to stick inside your brain bank for those tough workout days.

When you begin to recognize self-doubt, or you want to take the easy way out, make a mental note and surpass it. This way, you’ll form a new habit of being comfortable in taking the tougher route.

So, when you’re out on the course and things get heated, you’ll be able to stay cool. You know this feeling and you’ve dealt with it before. 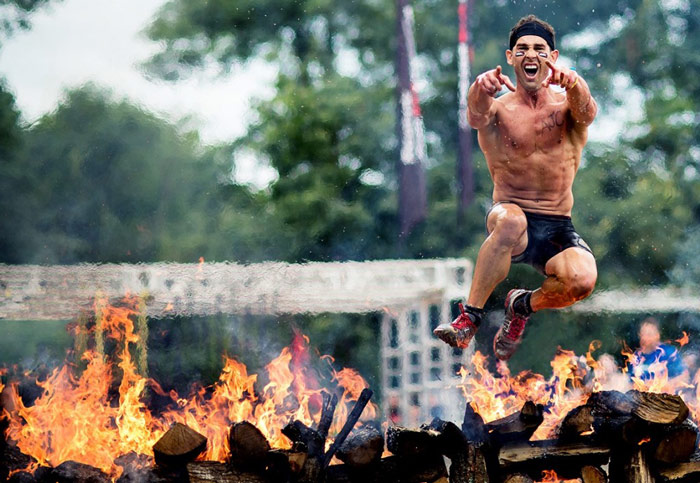 Obstacle course racing really is a true test of complete fitness. Not only physically, but mentally too.

That’s why we chose exercises that challenged the body and the mind too. Doing as many sets as possible to time will help you build determination of steel to match your physique.

Come race day you’ll be used to telling your lactic acid pumped legs to shut up complaining and b*tch slap self doubt into oblivion with ease. You know you can do this, you’ve experienced it already before.

Finally, the key is to push yourself and be 1% better every time you hit the gym. Keep a track of your set scores and use them as motivation. Make it personal.

We’ll see you out there in the blood, sweat and dirt, bro!