The old school bodybuilders believed that improving the mind-muscle connection was the key to better muscle growth. And now science shows us that they might’ve been right all this time.

There are loads of ways to get jacked. Muscle building is all about utilizing mechanical tension or metabolic stress to carve out that mass brah.

And whether you train with heavy or light weights doesn’t really matter as long as volume-load is high, and progressive overload forms the foundation of your program.

Strength training science is moving as fast as it’s ever been. It’s like some huge freight train traveling at terminal velocity.

Or should that be gain train?

But what about mind-to-muscle connection?

Could this really be the key to huge mass? Will mind-muscle connection give you a free pass to the gun show?

What is the mind-muscle connection?

Mind-muscle connection refers to conscious movement of a muscle during strength training.

It’s sometimes referred to as ‘muscle intent’ or ‘attentional focus’.

It’s the idea that you move the target muscle with controlled engagement rather than just blasting through a set without any thought as to which muscles you want to work… and how they should feel while trying to get the weight from one point to the next.

For example, when you bicep curl you don’t just bring the weight to your chest. You focus entirely on the bicep doing the work.

The mind-muscle connection uses an internally focused strategy where you visualize your muscle and where it’s moving the weight to during a lift.

In basic terms, you’re concentrating on the right muscles doing the work.

When you think of the mind-muscle connection you might imagine a monk, sat on a mountain with his legs crossed. He’s so deep in meditative thought that he’s reached Zen status.

It’s not as spiritual as that. Mind-muscle connection is simply being aware of how you move the weights, not just where. 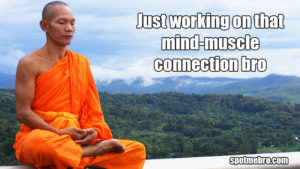 How does the mind-muscle connection work?

Muscles are controlled by your brain.

When you want to contract a muscle, you have to ping a series of electrical messages from your central nervous system to your muscle fibers in order for them to produce force.

The heavier the weight, the more (and faster) these messages have to travel to your muscle to overcome it. This is what’s called neural drive.

Once you’ve stimulated these muscle fibers they are obviously active. A muscle fiber that isn’t activated won’t receive an optimal stimulus for growth.

The more fibers you can recruit, the more strength you’ll have. And the greater muscle growth you’ll get too.

Mind-muscle connection is about adapting exercise technique to hit the target muscle as much as possible. It’s not about going through the lift at a super slow pace, it’s just about being aware and conscious of the muscle and the work it’s performing. 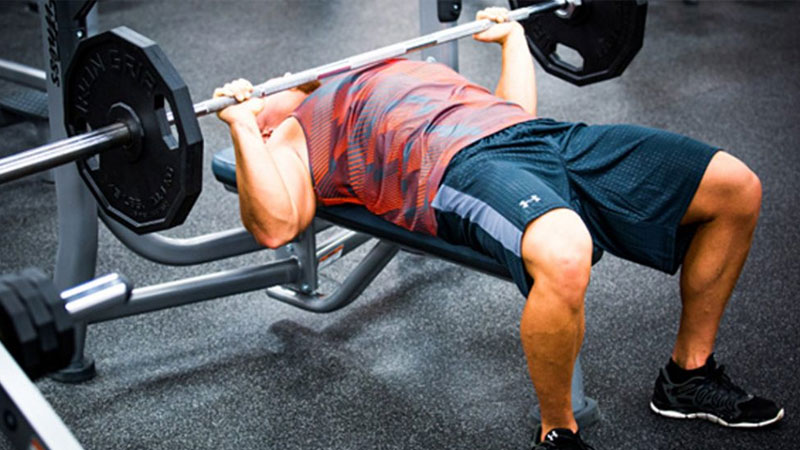 Myth or Science: Can you get jacked with mind-muscle connection training?

Whether you think it’s some voodoo sh*t or not, the science is pretty clear.

Improving mind-muscle connection can lead to greater activation of muscle fibers and maybe even a better muscle growth response.

Even experts such as world-leading muscle guru Brad Schoenfeld suggest that increasing mind-muscle connections are key to better muscle mass and strength results.

Simply because it maximizes the work performed by the intended muscles and limits other muscles taking over.

It’s kind of like cancelling any noise and distraction when you’re trying to revise for an exam or concentrate on a task. You’re channeling your energy to where it counts most. And in this case it’s your biceps, quads or pecs.

A cool study from the Journal of Strength and Conditioning Research showed that when a group of lifters employed mind-muscle connection during the lat pulldown, voluntary activation increased significantly.

And other studies have shown similar results for biceps, pecs and glutes too.

The research is pretty clear that mind-muscle connection ‘enhances’ muscle activation. And that the bodybuilders were right when they suggested that it could influence the way in which your nervous system delivers a muscle-building stimulus.

And while there’s no direct research looking at the effect of mind-muscle connection and muscle growth, the fact that it increases fiber activation means that’ll likely lead to more growth regardless.

Even just flexing your muscles can build mass

The old-time strength guys were adamant you could build lean bulk by just posing.

And they were right.

Back in the days of black leotards and handlebar mustaches, strongmen would perform ‘loadless training’. They’d stand in front of groups of envious, bright-eyes crowds, tensing their muscles and showing off their gains.

Recent research shows that posing and tensing with no weight helps to build a better mind-muscle connection. And that it also results in higher nervous system activation too.

And get this – the same research showed that even in untrained bros (noobs), the results were the same.

So get posing in that mirror and be the next Big Ramy bro!

Fix your technique and limit the noise

You’ve have seen those dumbasses in the gym. All ego, no form.

They attempt what kind of looks like a squat or a bench press, yet throw every single muscle into the movement as a way of cheating the weight.

Maybe they’re having a stroke and we’ve just not realized?

Anyway, when you bench press for mass gain, you want as much emphasis on the pecs as possible. If you go too heavy and start squirming under the bar like you’re trying to release a deep wedgy from your ass, you take the emphasis away from what you’re trying to achieve.

But getting your form right and dialing into the right technique overloads the muscles optimally. And that’s pretty much what mind-muscle connection training does.

It allows you to blank everything else out and focus on getting the job done like a f*cking gym ninja.

How to improve your mind-muscle connection

Okay, so you know that having a rock solid mind-muscle connection can help you make gains.

Here’s how to ramp up your nervous system control:

Summary- Use Mind-muscle connection science to make those gains

Mind-muscle connection is an old-school approach where you consciously control your muscle during strength training.

If you’re a dude who’s goals are to get jacked and build appreciable mass, give it a go. Check your ego at the door, lift with intent and don’t forget those poses in between sets.