There’s no better marker of strength and athleticism than the deadlift. It separates the men from the boys and the lifters from the b*tches.

When it comes to raw power, the deadlift is the one.

It’s a battle, plain and simple between you and the lift. And with your hands chalked and your adrenaline pumping, there’ll only be one winner.

But what’s the difference between the barbell and the dumbbell deadlift?

You might have seen people approaching this bada$$ lift in different ways – some go for the more traditional and conventional barbell version, whereas others change it up and use a pair of dumbbells.

Does it really matter? And if so, why?

The Deadlift: One exercise every lifter should have in their program

Do you even lift bro?

When it comes to recruiting maximum muscle mass, switching your nervous system into overdrive and punching up cardio like a sprint into the hills, the deadlift is unrivaled.

A good deadlift means synergy between your hips and knees. It requires timing, fluid motion and solid stability through the trunk.

It’s not as easy as it looks, and a great deadlift requires hours and hours of practice, married with unbreakable technique and motivation.

The deadlift is a key exercise in strength and conditioning programs across the world.

Deadlifting forms the basis of Olympic weightlifting of course; and obviously one of the big three in powerlifting too.

Partly because it ramps up athleticism like no other lift. And partly because it’s so complex – get the form wrong on a big lift and you will f*ck up your sh*t sir.

The deadlift is also ‘functional’ too.

We don’t mean that pseudo-functional bull crap stuff you see 7-stone string beans doing on wobble boards. Its functional because it transfers to everything from sprint and jumping performance, to stability and load transfer.

It doesn’t get any more ‘compound’ than the deadlift.

As a multi-joint, complex exercise it targets and recruits a huge number of large, global muscles. As well as smaller, stability-based local muscles too.

It works your calves, hams, glutes and lower back –  what’s known as the posterior chain. But it also hammers your core, traps, shoulders and arms too.

Not all deadlifts are built the same

The beauty of the iron game of course is that you don’t have to follow a one-size-fits-all approach.

Just because your favorite athlete follows one program or type of lifting doesn’t mean you have to as well.

Swapping out exercises that don’t suit your goals, adapting lifts to fit your size and preferences are all part of great exercise programming.

And that’s why the deadlift is so great – you can chop, change and modify endlessly.

You can perform barbell deadlifts or hex bar, dumbbell deadlifts or jump lifts. You can use a double-overhand, mixed or snatch grip; or follow a traditional force and strength curve or you can implement accommodating resistance with chains and bands.

It really is one of the most adaptable, versatile exercises out there. 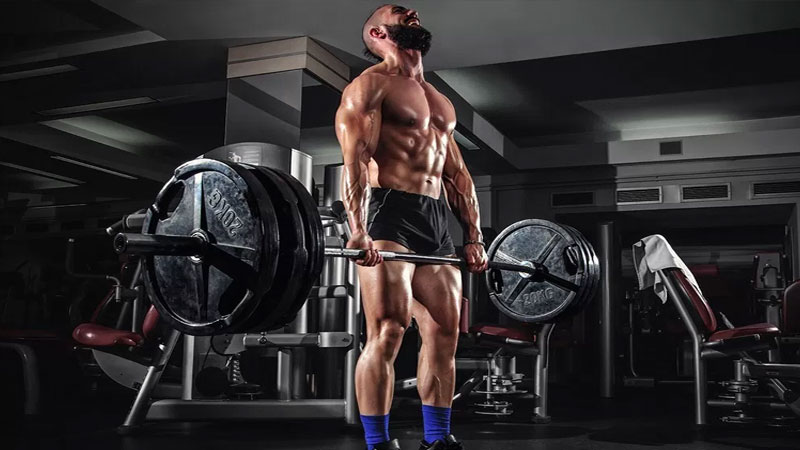 Whether its with a top-of-the-line, competition-grade Oly bar, or a sh*tty commercial gym bar, the barbell deadlift is by far the most common variation you’ll see on the gym floor.

The load is set in front of the body. You approach the bar with a hip-width stance, arms just outside the legs and the bar set close to the shins.

With your shoulders higher than your hips and your lats over the bar, you grip, rip and lift. A solid lift sees your back angle remain pretty much the same as you drive the bar past your knees, and once you’ve done that you use hip drive to slam the bar to lock out. 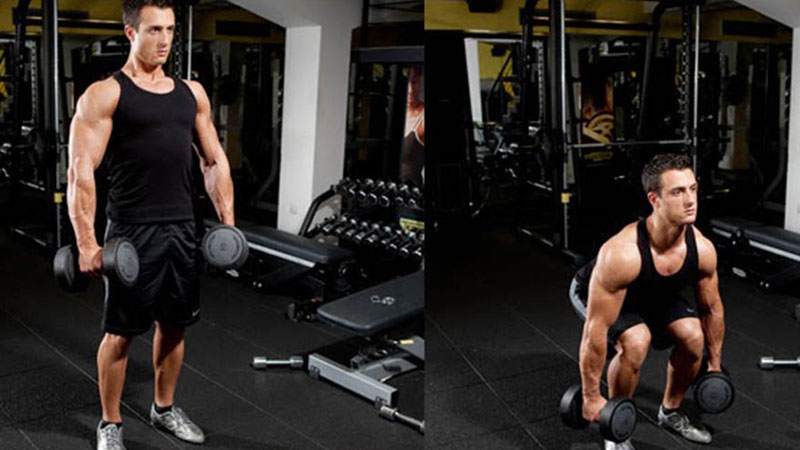 The dumbbell deadlift isn’t that far removed from the barbell variation. The big difference is that you’ve got more versatility with dumbbells.

Some lifters prefer to mirror the technique of the bar by placing them in front of the body and lifting with a grip that has your hands facing your shins.

Others use a more ‘neutral’ grip with the dumbbells directly at the side of the body and hands facing the outside of the legs. This is often referred to as a ‘suitcase’ deadlift.

The hip hinge position, timing between knees and hips and all other finer details are pretty much the same as with a barbell.

When it comes to differences between these two colossal exercises you have to delve into biomechanics.

Don’t worry if you’re not a science guy.

Even the subtle change in load position between a bar and a pair of dumbbells can change the kinetic (muscle force and activation) and kinematic (movement relationships between joints) variables of the deadlift.

The barbell and dumbbell variations hit recruits different muscles and force your body to move in different ways. 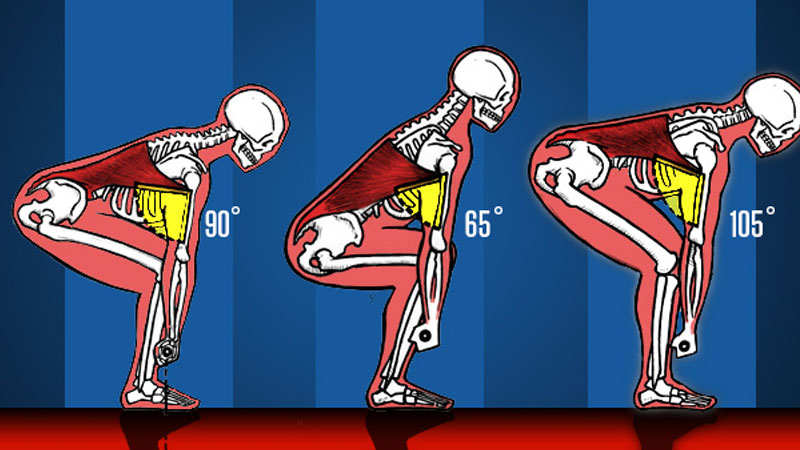 Because you are placing the angle of load directly through the middle of the body with the suitcase dumbbell deadlift, the stress on the lower back is reduced.

When you use a bar it’s in front of the body so the lower back muscles have to work harder.

If you’re familiar with biomechanical terminology you’ll know this as a ‘lumbar moment arm’. If not, it just means you don’t lean as far forward when using dumbbells.

The shift in lumbar moment arm not only affects lower back recruitment, but also has an effect on the ankle, hip and knee too.

A dumbbell variation means less activation from the hamstrings and glutes, and more on the quads. Plainly because when the back is straighter, the knees have to flex more to grab the weights and go through the full range of motion.

There are a couple of kinematic studies that show quad activation in suitcase deadlifting is more like a squat than a conventional deadlift. Essentially, the dumbbell deadlift is more knee dominant, whereas barbell is more hip dominant.

You can potentially lift more weight with dumbbells

Many coaches suggest that the shorter external moment arm with dumbbells, you might be able to lift more total load compared to the barbell deadlift.

And that makes sense for sure. Shorter levers means less effort (presuming the dumbbells are at the same heights as the bar would be).

We’re not convinced as such with this one. For us, the potential issue is with grip. The bar is stable and sturdy whereas dumbbells shift around more.

But it’s definitely worth a try if your grip is up to scratch.

Which is Best for You?: Barbell vs dumbbell deadlift

The short answer here is it depends.

If you’re a competing powerlifter or Olympic weightlifter the barbell is your bread and butter. There’s no real value in the dumbbell variation as it’s not what you’ll use in competition.

But if you’re a lifter who’s training for strength, size and power, variety might well be the key.

The conventional barbell deadlift hammers your posterior chain, whereas dumbbells might target your quads with more bite. There’s also less stress on your lumbar spine too.

Like we said right at the beginning, the beauty of what we do in the gym is that we’ve got endless variations of lifts to try.

Why not give both a go?

Gym Myths: Exercises That Are a Waste of Time