Spending hours and hours in the gym but not making gains bro? Chances are you’re focusing on these waste of time exercises instead of using your brain and lifting clever.

If you’re sporting string bean arms or you’ve got the quad game quality of a quarter squatter, you’re more than likely spending far too much time on the stuff that doesn’t work.

But who can blame you?

In a world where the dumb ass fitness model with a great six-pack can grab the spotlight with their dumbf*ckery and ass-hat coach advice, it’s easy to get caught up in the wrong way of training.

With a busy lifestyle and only so much time and energy to devote to the gym, you need to makes sure that your workout is efficient, effective and maximizes return on investment.

Are you following a program of waste of time exercises?

What alternatives can you use to replace them and finally start to ramp up your strength and muscle mass?

Can Exercise Really Be a Waste of Time?

There’s a whole mantra around “any exercise is better than no exercise”. The idea that just because you’ve swiped your membership card and gone through some half-assed workout that you’ve progressed your fitness.

But to be honest, when was the last time you heard a bodybuilder or real lifter spout that sh*t?

Because they know that to add good quality mass, you need to do more than just ‘turn up’. That’s the kind of snowflake statement peddled by entitled bitches who usually hide behind programs like ‘functional training’ and have the muscle mass of an anorexic vegan. 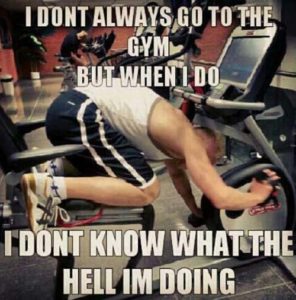 The reality is that if you want to progress your physique and carve out real muscle and strength, you have to train effectively.

The whole mentality just doesn’t cut it with bro’s. Avoiding proper training is for the tiny guys who’d rather spend 40 minutes on a foam roller warming up for an intense Yoga class than they would do training hard and building some actual muscle.

Here are the fundamental rules of great training:

If you don’t train to a level that your body is accustomed to you’ll just not force it to adapt. Progress will be painfully slow, to the point where it’s pretty much non-existent.

One of the biggest mistakes made with weight training isn’t so much the actual choice of exercises, it’s the fact that some bro’s out there just don’t work hard enough to make those real life muscle gains.

Gradually adding load, reps, sets or volume are all ways of making sure you’re carving out muscle in the gym. If you apply progressive overload, even the biggest waste of time exercises can have at least some value.

Gone are the days of religiously following single muscle splits where you’d hit a muscle once every 7-10 days.

The problem with this approach is that while single session volume is high, weekly volume is lower than it would be with smaller, more regular doses of overload.

There’s also a lower risk of overuse injuries too, by drip-feeding the stimulus of weight training rather than smashing you straight in the face with all-out muscle annihilation.

Full-body or even push-pull workouts are where it’s at right now because they allow you to target a muscle 2-3 times per week with decent volume of reps and sets.

This all comes down to progression-adaptation again.

Your body is lazy and won’t grow if you don’t force it to. Each time you get under a bar or dumbbell you should to train your set to fatigue – the point where the muscle struggles to complete more than an additional 1 or 2 reps.

This is the simplest way to optimize progress.

Science tells us that training closer to fatigue is associate with greater gains in muscle and strength. But, you don’t have to train to the point of absolute failure though so make sure you’ve got 1-2 reps in the tank at the end of each set. But no more.

Before we start, let’s get something straight. To say that an exercise is right, wrong or a waste of time is pretty black and white.

The whole idea about exercises being ‘bad’ or ‘good’ is kind of a myth. Even dumb exercises might have some use in some context.

Sometimes there’s a grey area where an exercise might suit you, but not other lifters.

We’ve made this list because the exercises included don’t optimize the muscle building progress. They might make it hard to implement progressive overload, they might be more risky than simpler alternatives or they just might not be optimal for muscle gain. 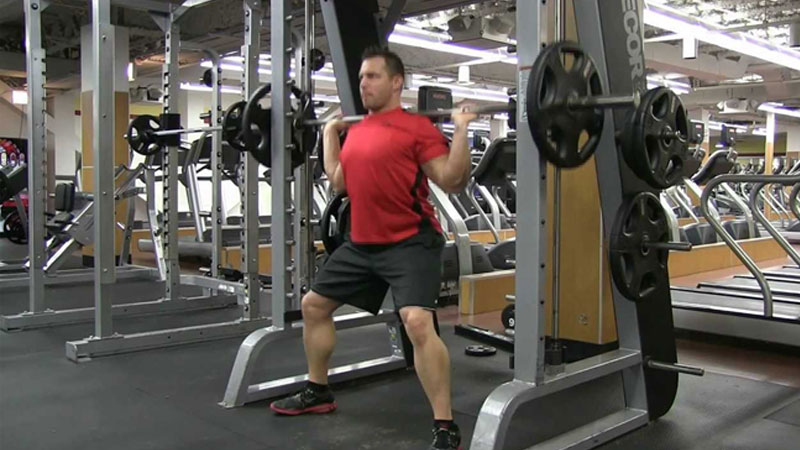 The Smith machine was never designed for squatting. It was designed as a self-spotting machine that made bench pressing safer.

Using a machine that restricts 3-dimension movement doesn’t allow the bar to shift in a natural path like you would during a barbell squat for example.

The natural bar path of a squat should actually be slightly curved. Or at least allow a natural curve to take place that follows the lifters individual limb patterns.

The Smith machine squat is a waste of time exercise because it only allows a fixed plane of movement.It’s restrictive as sh*t dude – just leave it alone.

Restrictive, up-and-down movement from the Smith machine can put excessive pressure on your knees and lower back. It also teaches poor patterns that’ll negatively affect your traditional barbell squat as well. 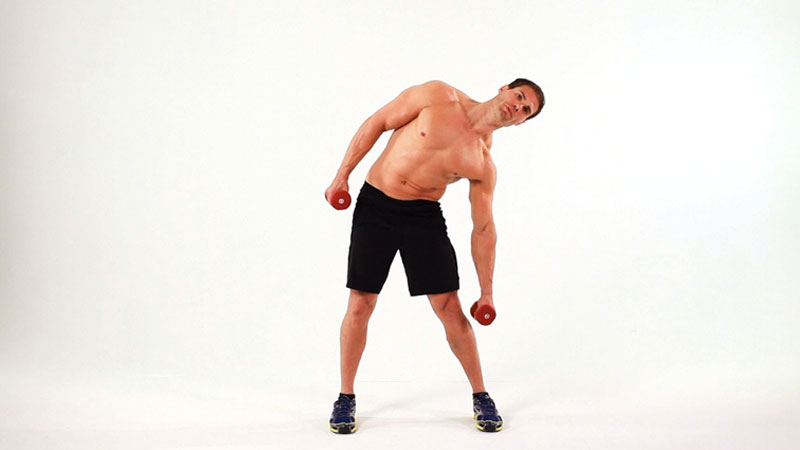 take a look around the gym on a Sunday morning and guaranteed you’ll see some dude hitting the double-speed side bends like an orangutan warming up for a dance-fight.

Most people throw in side bends thinking it’ll tighten up their waist and reduce muffin top fat. It won’t, and most bro’s know that you can’t spot reduce body fat by training a specific muscle anyway.

What’s worse is that many side benders tend to use weights that even your mom could use without issue. Busting out moves like MJ with your 13 lb dumbbells just won’t cut it unfortunately.

The primary muscles used in side bends – the internal and external obliques, quadratus lumborum and tons of others are actually pretty strong.

They can handle some real big loads if you’re man enough to actually ramp up the weight you use.

Lateral flexor muscles are also excellent anti-flexion muscles too. When you carry your shopping bags in one hand (every single goddamn bag in one trip if you’re a real bro) these muscles work, even though you’re not bending. 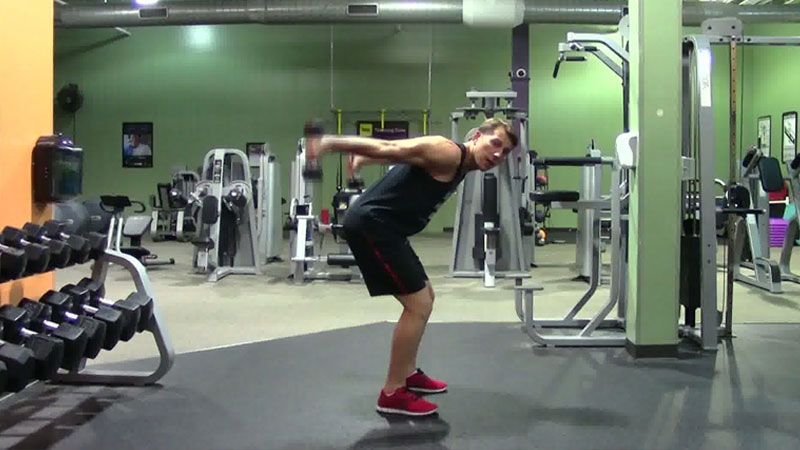 A good old favorite of spandex-clad aerobics instructors, the triceps kickback is one of the most butchered exercises out there.

In this exercise, the shoulders find it hard to maintain a fixed position underload, and your upper arm will more than likely drop toward the floor as your rear delts fatigue. This is more so the case when you use weights that’ll actually challenge the tricpes.

Even when done properly, the strength curve of kickbacks means that you get tension at the top of the movement, but little elsewhere. Basically, gravity is only pulling the dumbbell down as you lock you elbow out.

It’s a lot of effort for little value.

In terms of bang-for-your-buck exercises, this one is a waste of time. It’s unnatural, has little tension value and is just plain awkward. 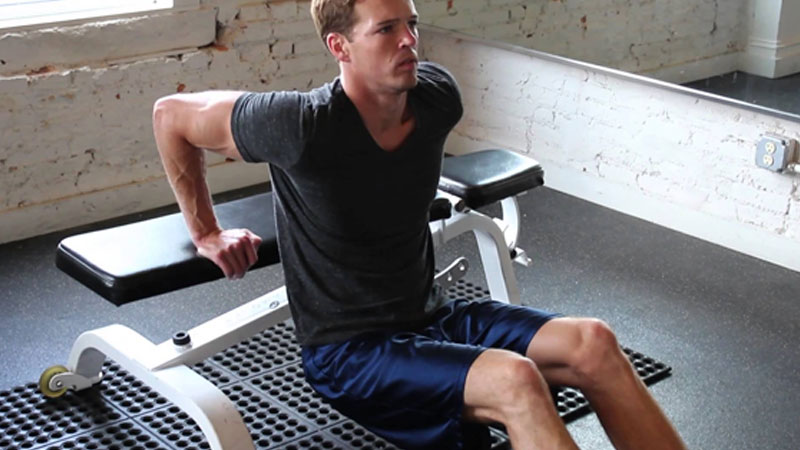 Not only are you taking up a bench that someone could use to lift actual weights, the bench dip is a shoulder problem waiting to happen.

Let’s ignore the fact that it’s not a great mass gaining exercise for just a minute, and focus instead on shoulder health.

In order to get through the range of motion you need to drop your ass toward the floor. Because your hands are locked in a position behind your body, your shoulder has to rotate forward in its capsule to allow your upper arm to move backwards.

The result is high shear force, excess stretch of the rotator cuff and much higher potential for muscle abrasions – basically you’re moving your shoulder into a pretty compromising position… and then asking it to bare the load of your own body weight.

Skip this one altogether and keep your shoulders healthy brah.

There are some pretty dumb gym exercises out there brah.

Some are unsafe and others don’t allow you to implement progressive techniques. The bottom line is that these waste of time lifts just aren’t gonn help you make those gains

The issue is with literally thousands of different lifts to choose from, some exercises need to die a slow and painful death.