Have you been living under an astral rock or in a remote wilderness somewhere? No? Then you’ve definitely seen Jason Mamoa recently. The stacked and shredded 6’4” beast is looking jacked beyond belief for his latest role as Aquaman – crushing any ‘corny’ character misconceptions.

Here’s how the Hawaiian native built his swole superhero physique…

Jason Mamoa isn’t the sort of guy you’d forget in a hurry. Ever since breaking onto the big screen he’s become one of the biggest stars on the planet. We don’t just mean that figuratively either, as his 6’4” 215+ pound frame is enough to make Hollywood’s baddest men stumble over their lines.

His first breakout roles were as the ruthless warlord Kahl Drogo in HBO’s epic Game of Thrones and the reimagination of Arnie’s iconic role, Conan the Barbarian. Movie and TV fans were blown away by Mamoa’s powerful and functional looking physique – something amplified by his routine warrior roles.

Over time the man mountain has gone from strength to strength. It was only time until he made it onto the main stage, bagging roles with the apex of superhero cinema. His debut role as Aquaman in 2016s Batman V Superman: Dawn of Justice went down a storm – making waves for Mamoa’s return in 2017s Justice League.

Now, heading toward the end of 2018, the long-haired swole superhero is back! This time though, he’s taking the headman spot as the lead role in DC’s long-awaited Aquaman. It’s safe to say he’s not about to let anybody else steal the limelight too – not if his physique can help it! 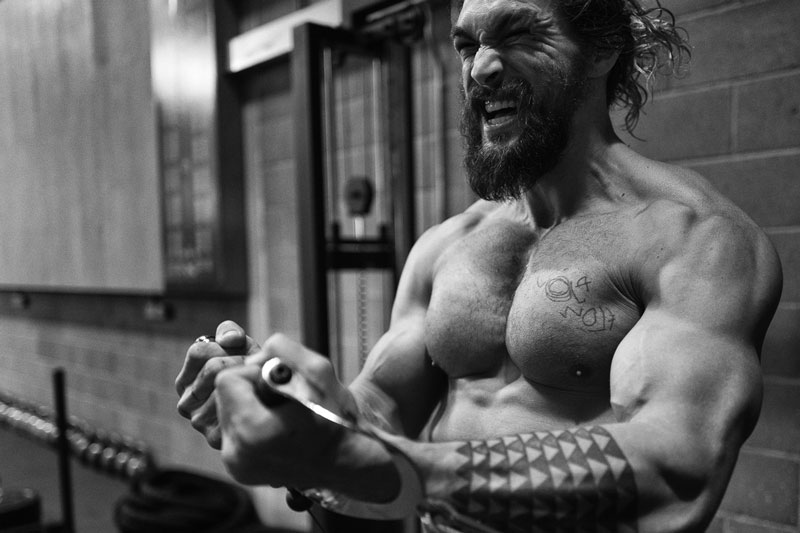 Building a superhero was never going to be easy. It takes guts, grit, and determination far beyond the realm of normal men. Fortunately, Jason Mamoa is the sort of guy with the drive to get sh*t done.

Standing at an imposing 6’4”, Jason is quite literally built to build. His natural genetics have gifted him a wide frame with broad shoulders, a thick torso, and a dense core. So, he was never going to struggle gaining extra muscle.

However, for his lead role in Aquaman, the Hawaiian came out looking more jacked than ever. His already inhuman slabs of lean mass looked bigger, fuller, and dare we say it… stronger.

Hell, we don’t think we’ve ever seen the dude so cut.

The Power of PPL Splits

To achieve his Aquaman amino drenched muscle, Mamoa embraced the power of PPL splitting. Working out four times per week, he’d first perform a push day, followed by a pull session and a leg day.

He carried out this process for an entire six months. According to his trainer, “we would usually lift at least four days a week and climb at least three times a week.”

Why a PPL split? Well, for an actor like Jason who is constantly working time is always tight. PPL splits focus on directional specific movements, meaning he can hit more body parts in one session.

On top of the pure convenience, the PPL split is also forgiving. Yes, you can smash big-ass compound lifts, but you also work alternate muscles. The ones you beast on push day can all recover while you work their opposing partners for pulling.

Finally, another reason the Hawaiian was smart to choose a PPL split is that they’re awesome for gains. By offering more opportunity to hit big compound movements progressive overload is made easier. Heavier weights can be added to the bar quicker – meaning the PPL is perfect for building size and strength together.

Want to learn more? Here’s a complete guide to PPL splitting include a workout for each day. 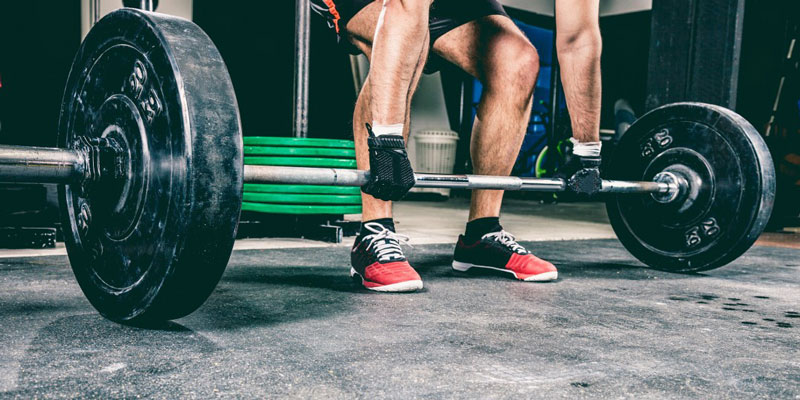 So, rather than bulk like your stereotypical bodybuilder, Mamoa went full superhero. After all, what good is all that muscle if Aquaman can’t use it? He needed to look athletic, not just aesthetic.

To do this Jason Mamoa and his trainers employed explosive compound movements. Think bar-bending deadlifts, serious squats, box jumps and medicine ball slams. Save isolation moves like bicep curls or calf raises as an accessory and/or aesthetic exercise.

They also trained in a traditional strength style to stack muscle fast, while burning fat to shreds. That means heavy weights in the lower rep range for any and all big lifts. 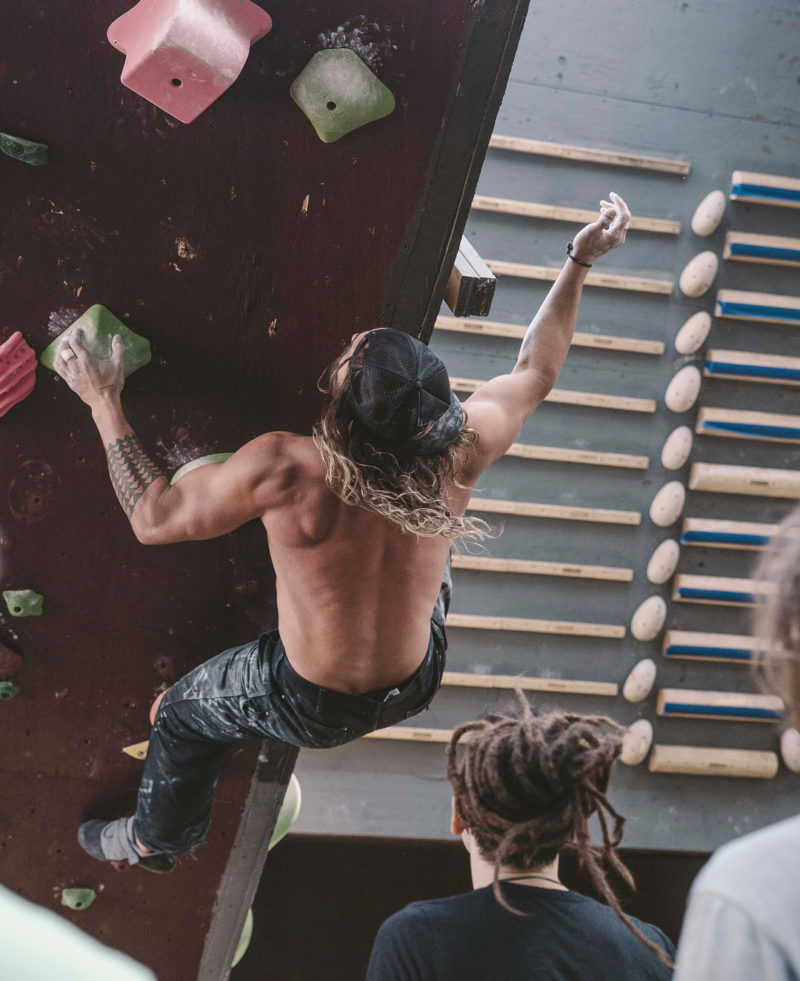 Five seconds spent on Jason Mamoa’s Instagram profile says it all. This guy is all about an active lifestyle full of fun and functional fitness.

He’s a huge fan of board sports like surfing and skating. Rock climbing plays a huge part in who he is too. For Mamoa, life is one big playground laid out in front of him to conquer.

Spending time surfing or scaling a rock-climbing wall builds all kinds of functional fitness. It’s the kind of strength that translates into the real world, and builds a body that says, “this man can move.” Plus, as an additional cardio element to his training, all this fun stuff helped him shape up too.

When speaking to Men’s Health, Mamoa explained this concept perfectly. He said, “it’s very hard sometimes to just work out. It’s monotonous and you can get stuck in a rut. I get bored, so I do a lot more boxing, surfing, climbing – I do the things I love to do when I’m not training for a role. When I have to change my body type, then we just switch it up. Doing a lot more weights for size; a lot more cardio for definition.”

What’s the takeaway? Screw the boring treadmill and do something you enjoy instead. Make your additional cardio training functional but most importantly, fun.

Try your hand at climbing or surfing like Mamoa, or something else such as swimming, cycling, martial arts or kayaking. You’ll be burning calories, testing your body, and all sorts of areas often missed in the gym. 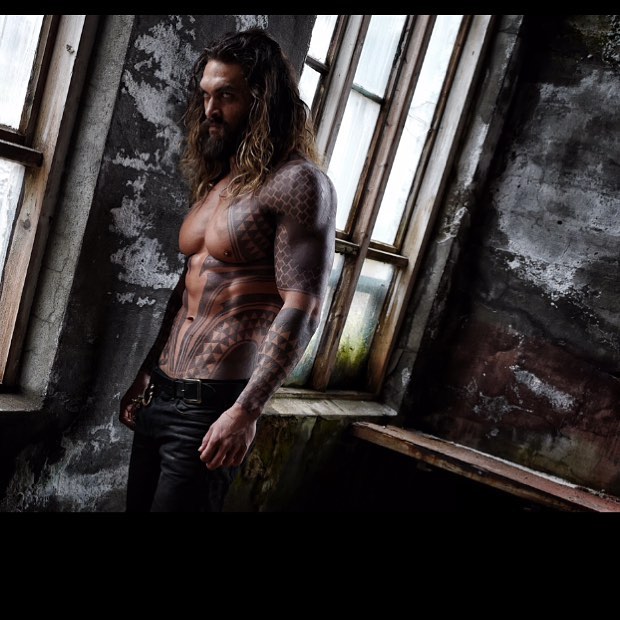 Growing muscle is all about eating enough calories. The extra energy from eating in abundance can be used to rebuild torn muscle fibers, helping them grow back bigger, faster and stronger.

For actors like the Aquaman star, it’s all about getting mean, while staying lean. To do this, they have to carry out what’s known as a lean bulk. Therefore, rather than just eat anything in sight, they have to be calculated in their approach.

While getting cut for his lead as a DC superhero, Mamoa was strict for six days a week. On the remaining day he’d let himself loose a little. Because, as we all know, a good old refeed is essential for staying on track.

When asked about his upcoming Aquaman role, the actor told Ask Men; “I’ve got to get really shredded. I can’t drink as much beer as I normally would like to! For Game of Thrones, Kahl Drogo was great. All I did was lift, eat pizza and drink Guinness. Now, I have to watch my girlish figure.”

Unlike his prep for Kahl Drogo, getting Aquaman levels of shreds meant Mamoa had to constantly adjust his macros. Hard carbs were cycled around training, while high-protein meals were always a priority.

When it came to preparing for a shirtless scene, the self-confessed beer lover even had to give up beer. We feel for you Jason, we really do.

Finally, while carbs are great for speeding up the bulking process nothing beats protein. As the fundamental building blocks of muscle, the actor simply had to eat his aminos in abundance to recover.

This meant including them at every feed to support his growth and shred goals. According to the ISSN, men must consume between 1.4 – 1.8 g of protein per kg of body weight every day for muscle gainz. 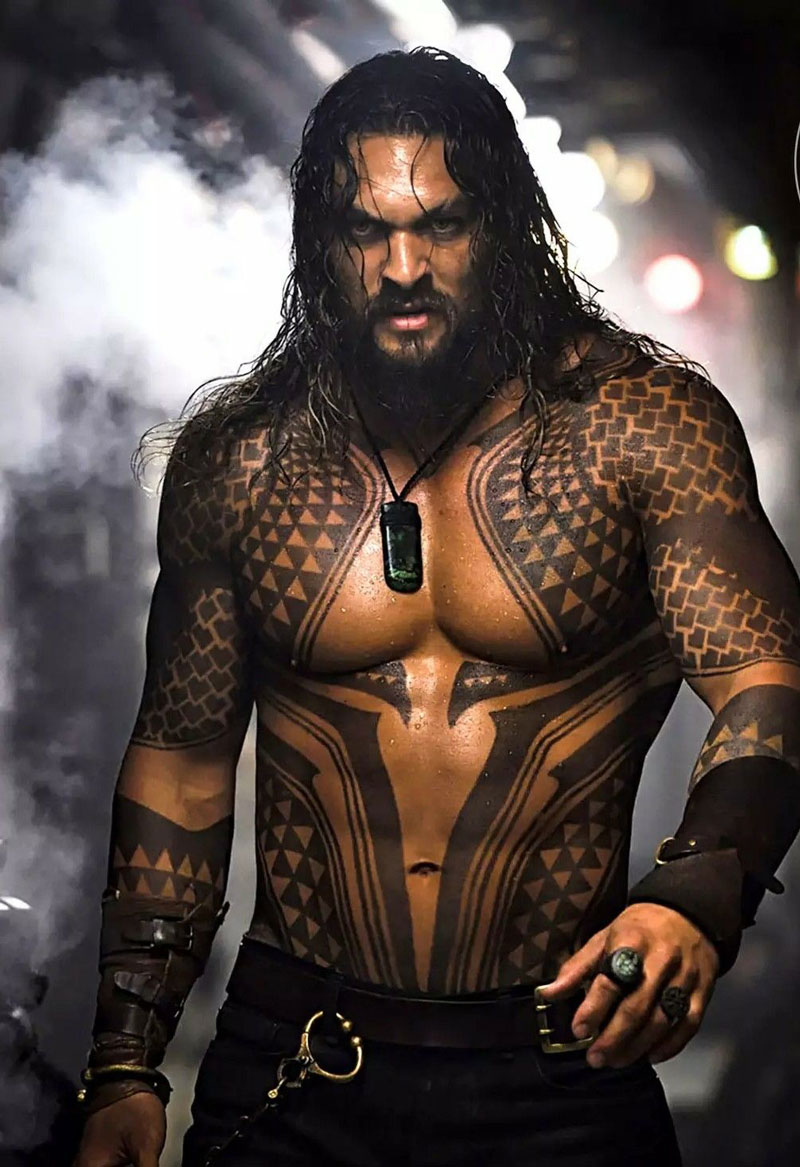 Conclusion: Putting it all together

There’s no denying that the sheer size of Jason Mamoa is impressive. His physique screams unadulterated strength, functionality, and superhero levels of un-fuckwithable. He’s not the sort of guy you’d expect to win an IFBB show, but for sure one ready to save Atlantis.

He built his latest physique on top of an already powerful frame. Both he and his trainers embraced the Hawaiian’s genetic disposition to getting swole by undertaking some serious strength training. This resulted into super-fast muscle growth, which in turn was sculpted a thick, dense, and natural looking body.

Backed up with bouts of fun AF functional fitness, Mamoa and his team built muscle that looked the part. Athletics and aesthetics co-exist in the same space, which is something vitally important to the Aquaman role. He needed to come across as believable and the audience needed to see a superhero physique that could get the job done. It’s safe to say the Hawaiian native nailed it once again.

So, what’re the three main takeaway points? Firstly, concentrate on explosive compound lifts. Secondly, remember to have fun getting functional. And finally, fuel those other-worldly gainz with a high protein and nutrient dense diet. Oh, and make sure to let loose once a week with an epic cheat meal.

Over and out, bro. Good look forging your superhuman physique!