Use the Zercher squat to open up a whole new world of strength, muscle mass and lower body performance.

Have you ever sat something massive in your lap and then thrusted it up and down until your legs gave way?

If you have, you’ve probably already tried the brutal exercise known as the Zercher squat. Either that or you’re just into BBWs bro.

Lifting heavy loads in the crook of your elbows is a great alternative to front squatting. And if you want to jack up your traps and build impressive wheels, this is the squat pattern for you.

In this essential guide we tell you everything you need to know about the Zercher squat – from origins and technique, to benefits and tutorial pointers.

It’s time to chalk up your forearms, dust off your lifting shoes and get comfortable being uncomfortable with this brutal, muscle building squat variation…

The Zercher Squat for Muscle Building

The squat is one of the most important lifts there is.

It’s been around since the dawn of man, when cave-dwelling bros would train legs by holding small dinosaurs on their backs and then repping out while chanting to the sun god.

Okay, we made that up, but the squat is definitely one of the oldest, and most respected strength building exercises there is.

Go back as far as 3,600 BC and you’d see Chinese strongmen performing squats and other exercises as strength tests to show they were fit enough to joining the ranks of the Chou dynasty.

It wasn’t until the barbell became popular in the 1900’s that we began to see what we’d eventually know as the back squat.

However, back then it was referred to as the slightly less cooler name ‘the deep knee bend’.

The History of Zercher squats

Although it was the barbell back squat that made squatting exercises popular, it isn’t the only technique you can use to build your lower body.

As modern science and old school bodybuilding have clashed head on like Hulk Hogan and Ultimate Warrior, they’ve created plenty of other effective options for leg day.

You can use a Zercher position for exercises such as farmer’s walks, Romanian deadlift and lunges for example.

But it’s the Zercher squat that we’re interested in here.

Ed Zercher was a US strongman throughout the 1930s and 40s. He was your typical junkyard monster strength athlete back then and well-known for his no bullsh*t approach to training.

Because he didn’t have a squat rack to perform back squats, he had to think of inventive ways to jack up his quads if he was going to compete with those that had better training equipment.

That’s where the Zercher squat was born.

Out of necessity more than anything.

Because if you can’t back squat there’s only two options. Be a pussy and don’t squat at all… or deadlift the bar onto your arms and grind out set after set of quad-scolding Zercher squats.

And for that we thank you, Ed.

So how did it get so popular?

Well if you’re a strongman that people look up to and they see you cranking out Zercher squats and your thighs are thicker than Kardashian bootay, they’ll put two and two together and start to copy you.

And as more and more people started to see results, other lifters started to tag it into their own training.

Zercher squats are now pretty common place in the iron houses up and down the world.

The best way to perform this exercise is to set up a barbell at around shoulder height within a squat rack.

That way it saves you having to struggle to collect a heavy bar from the floor. 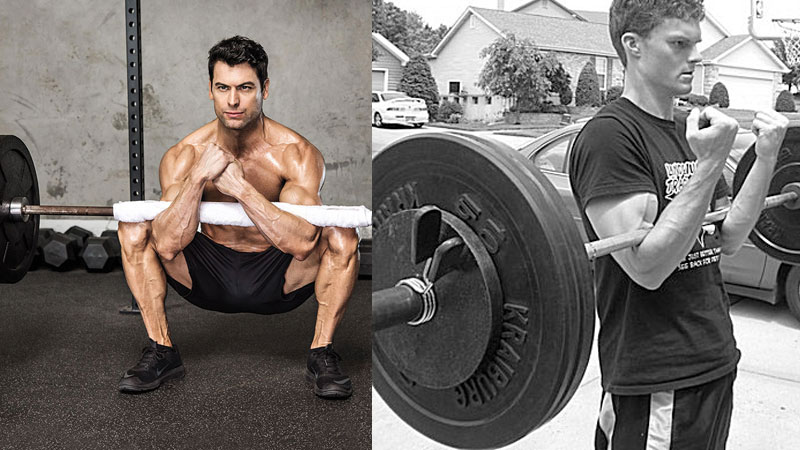 The Benefits of Zercher Squats

When it comes to building wheels that rival a Dodge Power Wagon, squats are top of the list.

Exercises such as lunges, hip thrusts and leg extensions are all great in their own way, but if you want to get the girls salivating in their panties you’ve got to pick up sh*t and go ass to grass.

It’s not all about getting your dick wet when it comes to squatting either.

Because there are other benefits too…

The Zercher position helps to build your quads and glutes

Squats in general are awesome leg builders, there’s no denying that. But the best part about the Zercher squat variation is that it loads up the quads more than traditional back squats.

It does this two ways.

Secondly, because the load can be used as a counterbalance, you can go much lower than a normal squat while still keeping your back straight.

Gets your traps jacked

Your upper and middle back have to work especially hard to maintain spine position and keep the bar close to your body during Zercher squats.

Holding your traps and rhomboids in a static shrug/row movement will absolutely annihilate your back muscles if there’s a weakness there. But it’ll soon have you sporting a tree trunk neck and bowling bowl shoulders in no time.

Most people’s front squat is damn poor when it comes to back stability. They round their backs and let the weight drop forward far too much.

This obviously has implications for how much weight you can lift effectively… and safely.

If you have issues maintaining good spine position on your front squats, Zercher’s train your body to stay rigid and strong in your upper body and provide a solid fix.

Summary – Use Zercher Squats to Get jacked

Zercher squats involve gripping a barbell in the crease of your elbow, holding it tight by pulling your arms in tight to your body and smashing out some solid, front-loaded reps.

As an advanced lifting technique, they’re not easy.

But put them in your strength workouts and you’ll open up a whole new world of quad and glute gains, as well as upper back mass for the win.