Kai Greene is one of the most instantly recognizable bodybuilders of the modern era. His long dreadlocks have earned him the nickname ‘The Predator’ and his freakish physique has lead to prestigious IFBB pro status. One thing that always stood out on the competition stage was Greene’s Godzilla-like calves, so let’s look how he built them!

Introduction: Who is Kai Greene? 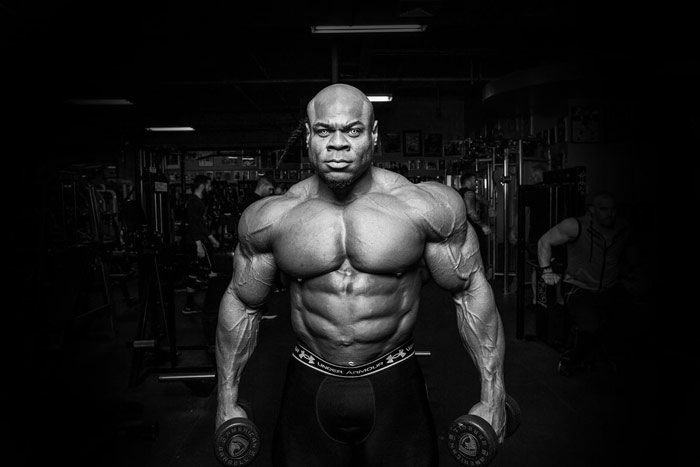 As a youngster, Kai didn’t have the easiest of starts due to a problematic home setting. From the age of six, he would move around different foster homes for the next ten years.

During these times the future star found an escape in bodybuilding. And knowing he wanted to become a visual artist, he used his body as a canvas.

Yet, as with many young men, ‘Mr Getting It Done’ struggled with the school system structure and regime. So in order to keep him on track and find focus, a teacher introduced him to the idea of bodybuilding competition.

Initially, it was Greene’s exponential growth and rapid development caught the eye of this 7th-grade teacher. The rest, as they say, is history.

As Kai progressed throughout his career he joined the highest ranks in bodybuilding. More than once ‘The Predator’ appeared on the Mr. Olympia stage among other giants, whilst being crowned multiple-time champion at the Arnold Classic. 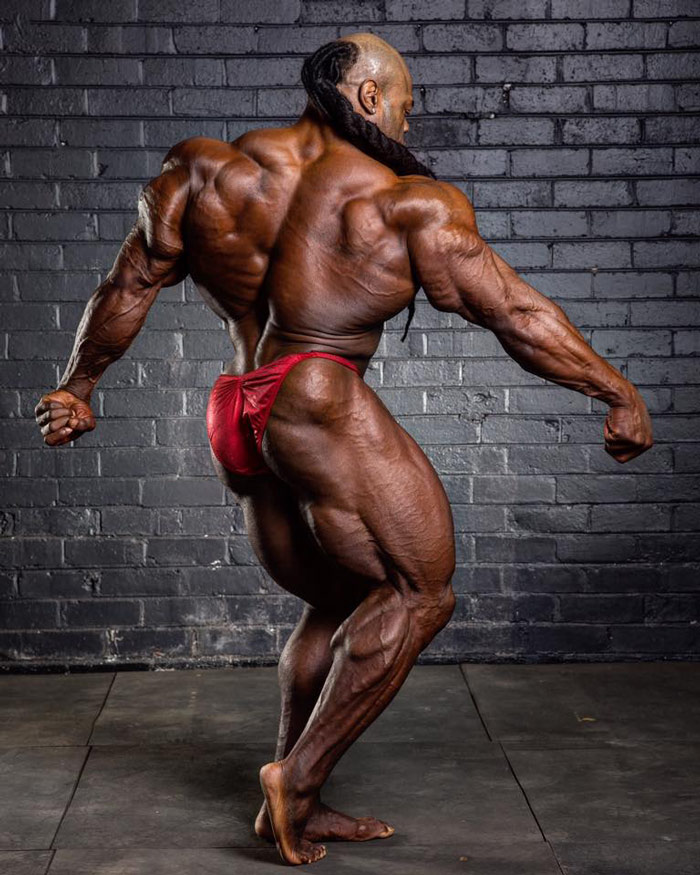 As we have mentioned one of Kai’s defining features are his unimaginable wheels of steel. They are godly, inhuman, and alien all wrapped into one. And they didn’t happen overnight either, hell no.

When speaking to an interviewer Kai talked about his legs like a prized piece of art. Which, as a master sculptor of the human physique, they pretty much are.

Kai’s calves are just a single part of his masterpiece. Something he says has taken him 20+ years to develop. ‘The Predator’ understands that the apex of bodybuilding isn’t just about one single thing, and that size isn’t the only ‘S’ that matters.

Symmetry is always high on his list of priorities. Therefore, he likes to make sure the entire musculature feels the burn that only heavy iron can provide. If you’re the kind of basic beta that always has an excuse to skip led day – move along. You’re not welcome here, bro!

Kai’s go-to method for targeting every single tricky fiber is alternating heels. So, instead of settling for the same position every time he’ll switch things up mid-set. For example, on a set of 12 calf raises, he might blast 6 with heels facing in, followed by 6 heel-out variations.

According to Greene, he is a big believer in keeping the mind in the muscle.

When crushing his calves he delves deep into the tissue with his consciousness or mind-to-muscle connection. He constantly checks in to see if he can feel the fibers working and where he’s hitting the hardest.

Key point: Use the mind-muscle connection and foot placement variation to hit every area. 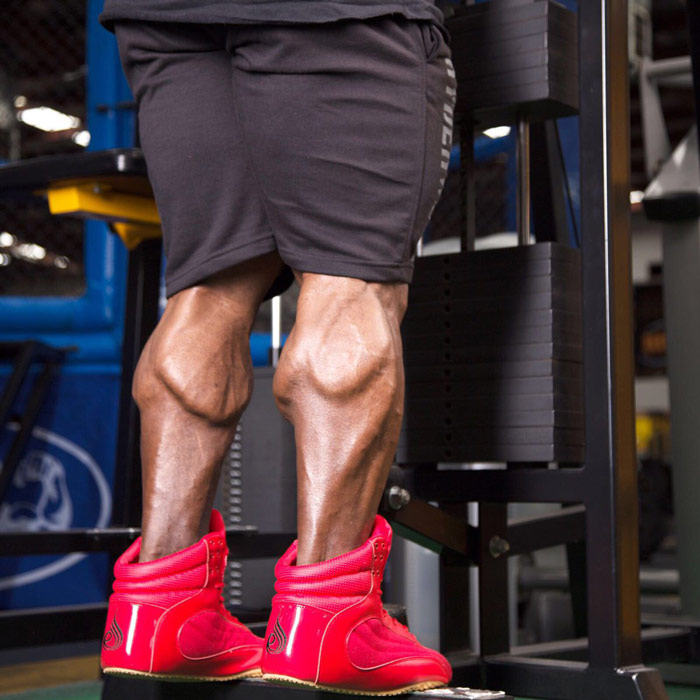 Who wouldn’t want to grow calves half as impressive as Kai’s? That’s why you’re here, of course!

You’re ready to turn those wet sacks of sand into thick vascular hunks of beef hanging from the back of your knee. And whilst you might not have the 20+ years of lifting experience like Greene, you can take his favorite lower leg boosting exercises as your own.

That’s exactly how our team of expert trainers constructed this workout routine. They scrutinously studied footage of ‘The Predator’ training to witness exactly how he gets those calves popping. Then, they took this vital information and made an all-encompassing plan.

Remember to switch your foot positioning halfway through every single set. No excuses – embrace the pump and keep on pushing! Some scientists have suggested that altering positioning does, in fact, cause greater muscle activation in different parts of the calves.

So down your favorite flavor of pre workout, set up a killer pump inducing playlist, and let’s do this!

Key point: Exercises 2 and 3 should be crushed as supersets. Rest minimally after the first movement before heading straight into the other. It’s tough, but nothing good ever comes easy, bro. 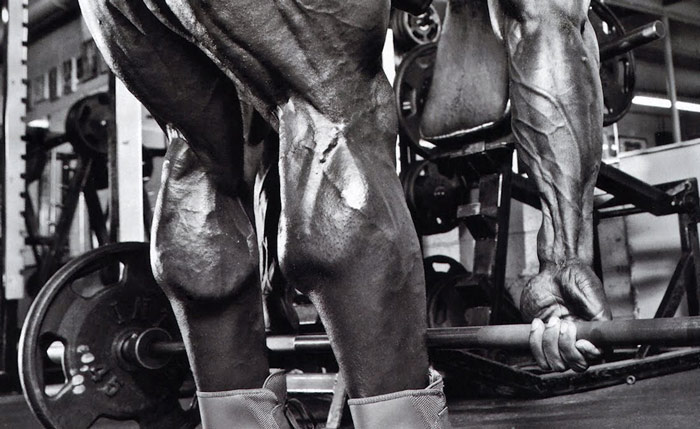 If you didn’t know already, the calf muscles can be found on the posterior of the lower leg. They start just above the back of the knee and end slightly higher than the heel bone.

The main role of the calf muscles is to contract and cause plantarflexion of the foot. You’ll have probably heard of this motion as ankle extension.

Think of a calf raise, and the ankle joint opening, then you’ll have an idea of what we’re talking about here.

There are two main muscles that make up our calves:

Some scientists and anatomists consider the calf to be a single three-headed muscle. If it were up to those guys, we’d be calling it triceps surae right now. Simply because both share a common insertion via the Achilles tendon – which does make sense.

But to keep things straightforward, we’re gonna stick to the two-muscle beast approach. That way we can all stay on the same anatomical page.

As bodybuilders, we’ve usually all heard of the gastrocnemius. Why? Because it’s a superficial muscle of course. And there’s no denying that we’re all over building and shaping anything we can blatantly see.

Our gastroc is formed of two heads, which give it a diamond-like shape. It is situated on the posterior of our lower leg, starting slightly above the knee and stretching down to our heel.

Therefore, we consider the gastroc to be a biarticular muscle, as it crosses two joints.

Its primary involvement takes place when we run, jump, or perform any other explosively “fast” leg movements. This is because when contracted, the Gastrocnemius causes foot plantarflexion and knee flexion, propelling us in a certain direction. 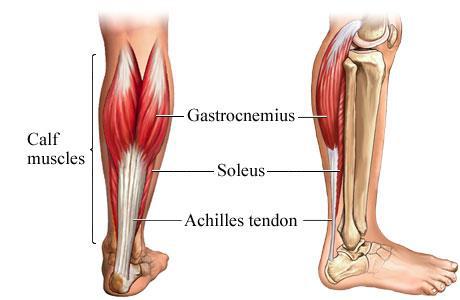 If the Gastrocnemius usually gets all the love, the Soleus is used to being stood up at the dance. Not many bros give a sh*t about the Soleus because it sits below its superficial brother.

Which, if we’re being brutal, is a f*cking atrocity. Come on, guys!

If there was ever a crime that should be punishable by death it’s not giving a damn about muscles you can’t see! Plus, the soleus is actually bigger than the gastroc – so go figure.

Anyways, back to the science lesson.

Just like the Gastrocnemius, the soleus inserts into the heel bone and plays a pivotal part in plantarflexion. This is most true during aerobic walking due to its majority of slow twitch muscle fibers.

Now, believe it or now, without a soleus we’d all be screwed.

That’s because it is the constant tug of this misunderstood muscle that stops us from falling forwards when standing. Oh, and it pumps blood back to our heart when we’re stood stationary too!

According to the bros in white coats, the human soleus is comprised of predominantly type I – slow twitch fibers. To be precise, it typically varies between 60-100% depending on the dude.

This is why it plays a larger role in walking than the Gastrocnemius. Because slow twitch fibers are less susceptible to fatigue, they’re better suited to support aerobic activity.

Key point: The calf is made up of two muscles; the gastrocnemius and soleus. Both play an important role in plantarflexion of the foot. 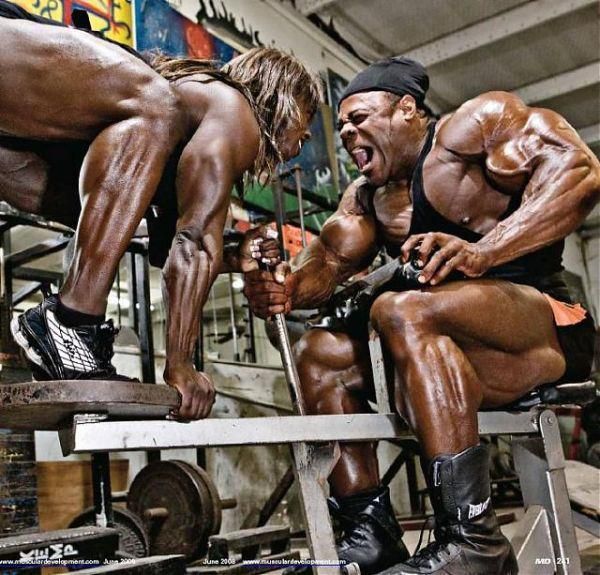 So we know how both muscles work independently and together. Sweet, now we have a basic understanding of how to train them.

The main exercise typically used to target the posterior lower leg muscles is the calf raise. And to make sure you hit both muscles your workout should contain both standing and seated variations.

This is because when standing the gastrocnemius has free reign to dominate the movement. Due to the muscle crossing both the knee and ankle joint, it is allowed to work from its complete full length.

However, in a seated calf raise, the knee joint is flexed. Consequently, this means that the gastrocnemius is situated in a shorted position, and can’t contract as far. This method is called Active Insufficiency and should create a scenario for the soleus to be activated more.

Key point: Both standing and seated calf raise variations should be used to best target both muscles.

Kai Greene is a professional bodybuilder with an outstanding physique. Aside from his larger than life physique and persona, his immense leg musculature sets him apart from the rest.

One of the most impressive of Kai’s features is his calves. Rather than shun the often overlooked body part, ‘The Predator’ has spent the last 20+ years carving them into giant hordes of muscle fibers.

Calves can sometimes be hard to grow, especially if you have sh*t genetics. So it takes dedication and perseverance to start seeing results worth showing off.

Just remember that ankle extension, i.e. calf raises, are super effective at hitting those stubborn S.O.A.B’s. Include both seated and non-seated variations in your workout whilst changing up foot positioning.

Finally, Kai is a huge advocate of keeping the mind in the muscle. Don’t wander off daydreaming mid-set about the inside of Margot Robbie’s underwear, or what pre workout might taste like with vodka this weekend.

No man, none of that sh*t, stay focused! Explore the muscle whilst it works and keep your head in the game for maximum gains.

Has this calf crushing workout raised your thirst for more muscle building knowledge?

Muscle Memory: Getting You Back to Your Bodybuilding Best