Many pros and bros laugh in the face of lower arm training. They say a thick set of double-barrels is all you need to win a ticket to the gun show – anything else is an accessory. But, the question still remains – is forearm training necessary? SpotMeBro finally gets a grip on the situation and looks at the facts…

Forearm training is admittedly something that not all successful bodybuilders consider important. If you were to ask the likes of Phil Heath, for example, he’d tell you his superior genetics take care of it all for him.

The lively Aussie legend Lee Priest, on the other hand, put it a lot more bluntly. When asked what his opinion was on pumping his Popeye muscles in the gym, he claimed there was no need for weights. According to him jacking off does the trick just fine.

But, not everybody exits the womb a genetically gifted gainer. Some scrawny souls are unfortunate enough to be created with wrists like matchsticks, or at best, pathetically average size radials.

Genetics inevitably play a huge part in bodybuilding and being born with cartoon hams hanging from our sleeves is a buff guys luxury. So it goes without saying that for some dudes, forearm training might be essential. 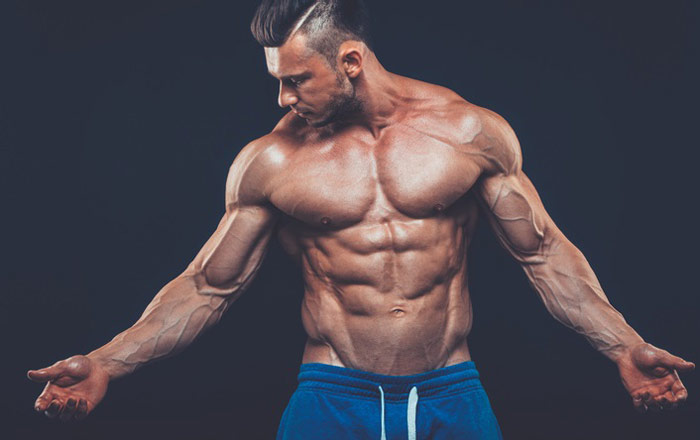 If you’re reading this you’re probably a stacked jacked to the gills vascular monster of a man. You have traps up past your ears and literally have to pay someone to keep the screaming chicks from climbing all over your body. It’s awesome to be you, bro!

So obviously, you train hard right? Mama didn’t raise no b*tch and we get that. What about forearms? If you’re like almost every other dude out there, then the answer’s probably not.

But maybe you should actually consider it for a second. Especially if you’re a fan of the sweet smell of gains in a morning.

First things first, throw all that bullsh*t gym floor dogma about forearm training out the window and listen. There are some serious benefits you’re missing out on and it’s about time somebody told you straight.

Luckily, SpotMeBro will never rest until literally every person on this planet is as Judy Dench as we are. That even includes all the women, old people, cardio bunnies, and CrossFit snowflakes with their stupid WODs. We don’t give up on anyone, not even you!

The Good, The Bad & The Ugly of Forearm Training

Guess what, bro? We train forearms damn it! The science says we should and we look freakishly good whilst doing so. But obviously, there are pros and cons to dedicating our limited iron time to such an often overlooked area. Here’s a few worth mentioning…

Because you’re smart, you can see there are arguments on both sides of the fence. Yet, it doesn’t take a genius to work out that the positives seem to outweigh the negatives whichever way we look at it.

Just in case we haven’t convinced you to add some swole-ness to the throat of your venomous pythons, let’s break things down. Now we will take a look at what you can achieve by implementing forearm specific exercises into your game.

Get a ripping grip 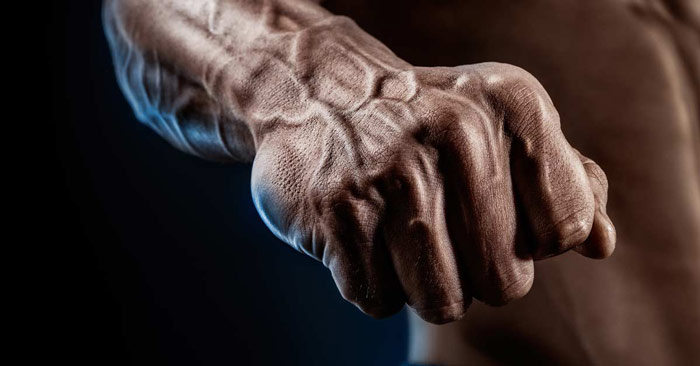 If there’s one thing we can learn from the powerlifters, it’s how to move something heavy and scream a big f**k you to gravity. So it should come as no surprise that some of the best in the big-lift business do accessory work to forge a vice-like grip.

There are no two ways about it, the crushing power of a man’s grip is all down to what hangs below his sleeves. It’s these forearm muscles that power the phalanges (fingers) and hold fast a bar bending grasp.

In fact, we should also point out that studies have shown grip strength has a direct correlation to total full body strength. Do you still think you’re strong? How about ripping a deck of carbs in half or picking up an anvil from terra firma with one hand? Now that’s two real alpha party tricks to master, bro.

As bodybuilders, our grip is the final point of call between ourselves and the bar we’re about to dominate. Simply put, if our grip can’t handle the heat, we’ll drop the b*tch faster than a red-hot iron. Nobody wants to be that dude responsible for the sound of clanging plates. signaling a slip and a failed attempt.

Inferior grip strength means that the remaining body cannot unleash its full raging gorilla potential. Imagine knowing you could deadlift another 20 lb easy if your hands didn’t keep ducking out when it mattered the most.

[infobox] Remember, a chain is only as strong as the weakest link. [/infobox] 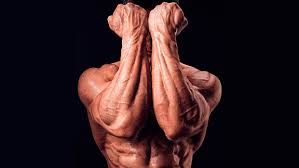 So we have clarified that giving our forearms a good old fashioned thrashing can improve our grip strength. Our handshake will become something of legend and never again will we face the embarrassment of a dropped bar.

But what are the practical applications to bodybuilding? Well, that’s pretty simple. By strengthening our forearms, and therefore our grip, we can work harder for longer in the weight room.

Consequently, we can expose various body parts to even greater time under tension. As any bro with a hint of brain matter knows, this means more metabolic stress, therefore optimal micro tears within a given training window.

Let’s say two dudes, Chad and Brad, clock into the iron house to put some work in with partial bicep curls. Chad trains forearms as part of his weekly schedule, Brad laughs at him and just takes ab selfies in the squat rack instead.

Brad then has to drop the dumbbells after 10 partials because his forearms say “f*ck this” and burn out fast. Chad easily makes 14 with the same weight and could still choke slam a shark if he needed to.

All aboard the gains train 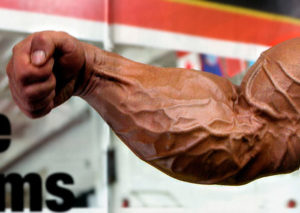 Theoretically, which dude has been able to put the most work in? Chad, right? He’s got a whole 4 extra reps on Brad, who by the way, is a complete p*ssy.

Maybe if you gave the lower arm half as much love as your biceps, both would swell and grow together. Leaving you with two upper body limbs that look like radioactive beasts out of a CGI happy horror flick.

By developing forearm strength and endurance to actively assist all your heavy lifting. You’ll be buying a one-way ticket aboard the gains train. Destination – swole city, baby!

There are 20+ muscles the make up the forearms. As bodybuilders why would we not want to unleash their full potential? Yes, there’s a massive fear among physique competitors that large forearms could overshadow the coveted bicep.

But surely bicep worship isn’t the be all and end all of bodybuilding? Especially when you consider the forearm is naturally longer and more visible for the majority of us. 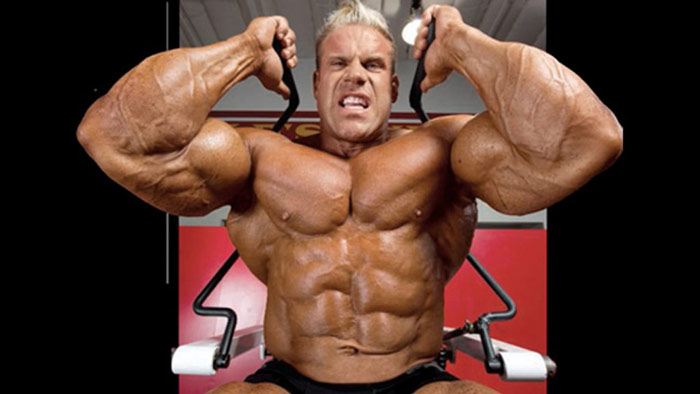 In fact, by building impressive hanging hams from wrist to elbow, we can make our entire arm seem bigger.

This factors into our entire aesthetic and appearance. Thick shipyard rope hauling forearms give us a balanced masculine look, one that screams absolute strength and manliness. They tell the world; “I am armed and dangerous with a grip that can crush skulls like candy”, not, “I do a whole lot of curls on a Monday in my safe air-conditioned gym.”

When flexed against the bicep, the bulging forearm actually supports its top heavy brother. It helps to fill any surrounding space and blocking out light like a galaxy-eating anabolic black hole. The result is a bicep that tricks the eye by looking fuller, thicker and extra intimidating.

One colossal human being who advocates forearm training is none other than Jay Cutler. As a four-time Mr. Olympia winner, he knows everything there is to know about building a world class powerful and imposing physique.

From a purely aesthetic point of view, the vascular neck of his pythons makes the entire arm look complete and immense. When in a posing position the entirety of his guns resemble one thick unit looking strong and developed throughout.

He does not fear that his forearms may overshadow his biceps, he confidently flexes them together and works them as a team. Now imagine your own arms being as thick as a tree trunk and sculpted like a Greek God from wrist to shoulder. You’d look incredible. 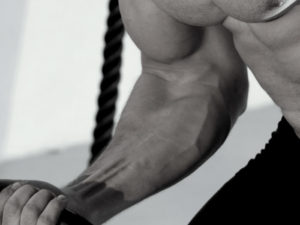 Simply put, yes. Well, in actual fact if we’re telling the truth, it depends. Here’s why…

So all you’ve got to do is decide which description fits you best and you have an answer. We’d say yes, go ahead and throw them into your routine! Reap the vast rewards if you haven’t already, bro.

Eventually, you’ll be able to lift more impressive numbers and for longer. Your ability to train with heavier weights for extended periods of time will definitely become amplified. In short, you will unlock gains that would have been well out of your grasp without your improved grip.

Aesthetically you will look well balanced, strong, and ultimately more masculine than ever. Rather than appearing as a set of biceps wrapped around a popsicle stick, your arms will turn into thick cables of rippling bulging mass. You will look naturally strong to anyone who can see and feel like it too.

Now go train! There are future handshakes that need crushing.