It’s not just the grizzly bear beard, bulging biceps, or barrel chest that makes a man. A real chariot of muscle needs to be rolling on wheels of steel too. So, even if your top half is a cross between a Viking and a prehistoric caveman addicted to Mammoth wrestling, little legs still make you a wimp. That’s why every assertive alpha-male must drill the Romanian Deadlift for bigger hamstrings and glutes.

One of the problems many men face is they’re stuck in front of the mirror. Once they start stacking muscle they’re mesmerized by their reflection.

By hitting the hams hard with Romanian deadlifts, we can make sure our rear end is kept up to scratch. Plus, a good strong set of glutes never hurt anybody, especially the athletes among us.

So, with that being said let’s dive ass first into the RDL. Here’s what you need to know…

What is a Romanian Deadlift?

You’re no newbie in the iron house. You’ve been ripping the sh*t out of barbells for years, and your registered zip code is the exact location of your favorite bench. But let’s be real bro, not everybody is familiar with the Romanian Deadlift (RDL).

Essentially, the RDL is a variation of the standard deadlift first shown by Olympic lifter Nicu Vlad. During a conference for barbell bending badasses in the 90s, the Romanian Olympian demonstrated a strange exercise half-way between a conventional and stiff leg deadlift. Understandably, the crowd was confused.

When asked what the move was called Vlad simply shrugged his boulders. Apparently, it was just something he did to strengthen his back as an accessory.

The U.S. Olympic weightlifting coach then stepped in with a suggestion. Why not call this movement the ‘Romanian Deadlift’ in honor of the athlete? The rest is barbell bending history.

You’ll recognize the Romanian Deadlift as a variation where the lifter lowers the bar from his hips to just below knee height. Therefore, it isn’t started from the floor like a conventional DL, and knees are kept slightly bent throughout.

Which muscles does it hit?

Nothing strengthens the posterior chain quite like deadlifts. No matter how many ‘back’ exercises you hit, pulling the sh*t out of a heavy ass barbell will always come out on top. It’s raw, primal, and downright alpha – the back side of your body has no option but to strap in and go for a ride.

Now, that makes the RDL so great is how much it targets the hamstrings and glutes. Because of the shorter range of motion and increase hip hinging, extra emphasis is placed on these muscles. Lifters can actively feel this focused attack during the exercise.

Here’s a rundown of muscles hit during a Romanian Deadlift:

Another key point about the RDL is it’s perfect for hypertrophy gains. This is because extra emphasis is placed on eccentric loading (lowering), which is said to be the most influential phase for kickstarting the remodeling of muscle tissue.

How to Romanian Deadlift

Today we’re going to look at the standard barbell RDL. There are many variations, but it’s important we’re all on the same page bro. Master this movement first and then tackle the rest of the RDL world when you’re ready.

Depending on how hard you’re hitting legs and back will influence your set up. Some bros believe lifting from the rack is better simply because you’re not wasting energy. However, many muscle dudes reckon ripping the bar from the floor is the foremost way to start every set. For us, we’re gonna say go from the floor for extra deadlift practice – aka don’t be a b*tch, bro.

You’re going to want to grab the bar with a conventional clean overhand grip. Whilst it’s common for guys to grip using alternate hand positions, this can put extra stress on the supinated arm. Ideally, your hands want to be shoulder-width apart.

Stand up straight with feet hip-width apart and let your arms hang straight. There’s no need to ‘pull’ the bar as we’re not smashing some weird chest/arms workout, it’s strictly party in the back, bro. Let the bar rest comfortably on your quads and we’re ready to go.

Breathe in as you break into a hip hinge. As the bar lowers, sit your hips back and let your top half fall towards the floor. Remember to keep a neutral spine here and try not to crane the neck. Tip: Imagine you’re tucking a tennis ball under your chin throughout the whole lift.

Keep the knees bent a little but make sure your shins are vertically upright. It’s okay to have a slight arch in the lumbar region but monitor any strain felt here. You should also feel a stretch in your hamstrings.

Once the bar goes slightly past the knee height it’s all about returning to the starting position. Breathe out as you open the hips once again, reversing the original hinging motion.

Remember to keep the core braced and spine in neutral. Don’t be a little beta and back out of the lift halfway. We’re not done until the bar is safely back on the floor, bro, so stay focused. 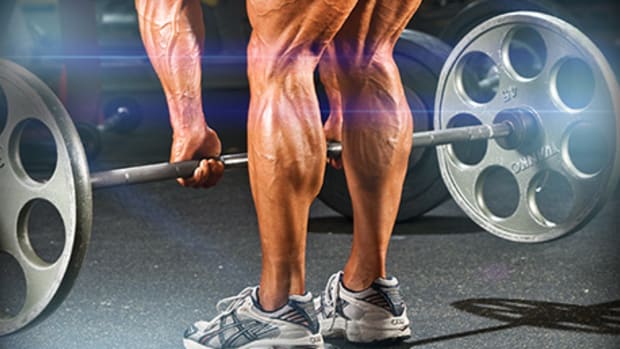 Whilst it might follow a similar movement pattern to the straight leg deadlift the RDL is in a league of its own. With a slight knee bend and a higher emphasis on hip hinging, it’s incredible for building bigger hams and glutes, as well as a mightier posterior chain.

Hit every single rep across the complete range of motion to feel the full effect. Tap into your spine, check in with the lower back, and bring that sucker down. A slight inverted arch should be maintained in the lower back and you should feel a deep hamstring stretch.

By drilling this deadlift variation regularly, you’ll reap rewards far past jean splitting glute growth and hench AF hams. Romanian deadlifts can also improve dynamic flexibility in these areas too, including the lower back. Essentially, you’ll be able to explode into sprints faster and hit harder football tackles.

Finally, try not to make the common mistakes of not utilizing full ROM and going too light. So long as your spine is kept straight, and technique is correct, you’re gonna be safe. Don’t skimp out on sick gainz for the sake of a little hard work, bro. That’s not the SpotMeBro way.

Hungry for more mental reps, bro? Check out these slabs of muscle knowledge:

How to Build a Home Gym - Essential Exercise Equipment