When it comes to building shoulders that block out the sun, it’s all about volume, load and exercise selection. The Bradford press probably comes under the category of “lifts you should be doing but aren’t”. And we’re here to change that.

If you need a different exercise to spark off some new growth, or it’s been a while since you focused on the classic lifts; the Bradford press if for you.

It’s a shortcut to pure gains. And anything that packs on muscle fast is a winner in our book.

Targeting more of your delt muscle than a standard military press, this old school variation should be at the front of your lifting locker room.

What is The Bradford press?

Back in the day we had guys like Reeves, Weider and Park getting swole coming up with novel ideas to get huge.

They were mold breakers.

Named after African American heavyweight lifter Jim Bradford, the Bradford press is a variation on a standing shoulder press. It adds a muscle-building, novels stimulus for your delts that you can’t find elsewhere.

The ‘Bradford special’ as it was once called, is a classic lift that you might not have heard about.

It was designed purely as an assistance exercise for the clean and press – an exercise that World Championship silver medalist Jim was famous for.

Since then it’s evolved to become a core lift for many of the pro’s.

How do you perform the Bradford press?

Start by grabbing a barbell. A heavy ass barbell that’s bending in the middle under the sheer weight on it preferably.

Begin with a standard front or clean grip position with the bar just above your upper chest. Press up like you would for a military press. But once the bar clears the top of your head you need to bring it behind your neck until it comes in line with your ears.

And from there you press it back up and return to the front position.

There’s no lock out at the top of the movement, and practically all of the work is done by your deltoids and upper trapezius rather than pressing the whole way up by using your triceps.

Is pressing behind the neck safe brah?

Maybe you’ve heard that pressing or pulling behind the neck can lead to injury.

If you have, plain ignore it. It’s just a myth perpetuated by nerds who don’t even lift.

Behind the neck press is a sure way to get jacked. And building stability through your rotator cuff while targeting more fibers of your delts isn’t unsafe.

It all comes down to choosing the right load and performing the lift with respect. Technique first is key.

The only time we’d suggest you either avoid the Bradford press or proceed with caution is if you have an existing shoulder or neck issue. Or if you have a hunched over posture and simply can’t press a bar behind you without crumpling like a noob trying to one rep max a double body weight squat. 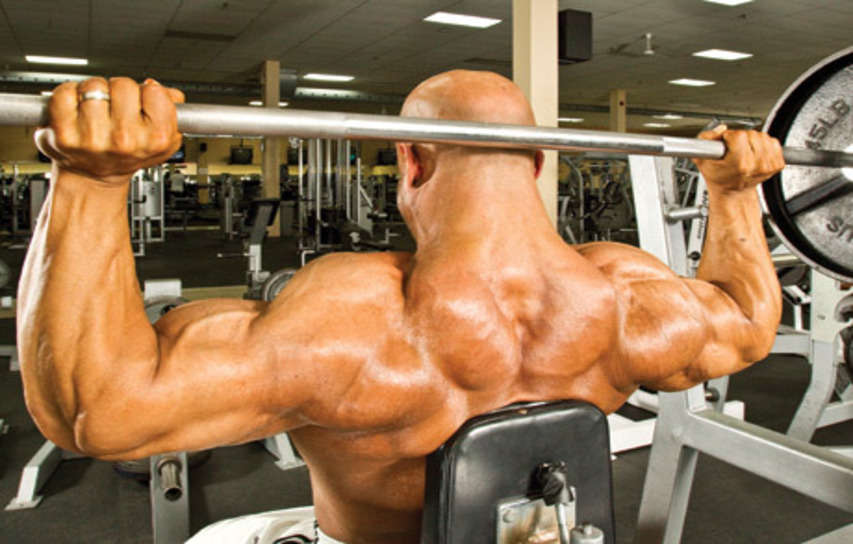 Giving you just the tip: Because of the limited range of motion and constant tension on the delts, you won’t be able to lift as heavy as you would with a standard front press.

What are the benefits of the Bradford press?

The great thing about the Bradford press is it’s brutal intensity. Whether you want to use it to build slabs of meaty, thick muscle or just annihilate your delts with scorching acidity during burn outs – it’s got it all.

Here are benefits, broken down into bite size chunks…

Greater activation of the deltoid heads

Muscle fibers are most targeted when they oppose the line of gravity. That’s why a bench press hits your chest and a shoulder press stimulates your delts.

Standard pressing is very much a front head exercise as you place tension through the fibers that activate the anterior delts.

If you were to grab a white coat-wearing lab nerd and ask him to explain muscle activation he’d dazzle you with science. Okay he might fall into the DYEL category, but he’ll definitely be able to explain how much a muscle activates during weightlifting with what’s known as electromyography (EMG).

And that;’s great for us bro’s that want to learn more about how a lift targets each muscle head.

Tests where lifters have been asked to perform various delt exercises and then had their muscle head activation measured shows that the Bradford press is high up for mean (average) and peak (highest) EMG for:

As a shoulder mass builder, the Bradford press is one of the most well-rounded exercise you’ll ever add to your program.

Constant tension through your delts

There are a fair few words that sum up the results of the bradford press.

And while we know that volume-load is the key factor in building that sweet, sweet muscle… tension is an important factor too.

When you perform a standard shoulder press you find that you ‘lose’ tension at the top of the movement as the triceps extend to drive the weight upwards and take over.

But with a Bradford press you never give your delts any respite. They never get a chance to rest at the top of the movement.

By minimizing intra-set recovery and momentum, you can place a huge stimulus on your shoulders through every rep and every set.

Continuous tension helps you build muscle, even with lighter loads. When the muscle is in a constant state of contraction it suffers from a reduction in blood flow and therefore oxygen (this is called a hypoxic state).

The side effect is that your delts will be pumped full of acidity, metabolites and a pump like a muthaf*cker.

That’s a great way of upping metabolic stress and growing some badass muscle.

Bottom line: constant tension is just another weapon in your assault on your muscle fibers. Win the war and you’ll be rewarded with gains that’ll cost you the price of some new wide-fitting t-shirts brah. 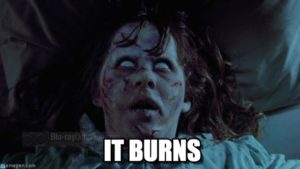 You need to sneak a quick selfie in while the gym’s quiet. Or maybe you’ve got a hot date with that chick from the office.

Either way, nothing screams the art of manliness than a wide set of shoulders.

What’s the best way to inflate those deltoids?

Hitting up 100 non-stop reps without any rest at all will have you in so much pain you’ll be wishing you were in Guantanamo bay for a light rest and holiday.

Better yet, throw in some drop sets isometrics too. that’ll really test your resolve.

You’ll feel like your delts are on fire. Don’t be surprised if some hairy-footed little dude throws a ring at you.

If the aim of the game is to build a V-taper to rival the greatest, the Bradford press should be in your program. It’ll help you define a physique to match the classics.

As a whole-delt activator with the potential to trigger huge masses of quality muscle, you’ll not get much better than this.

How to Improve Sleep Quality - Optimize Recovery for Bodybuilders