You may not know this but kettlebells have been around far longer than you might think. Sure, CrossFit may have brought it back into the limelight of the fitness world but that’s not where it started.

In fact, before kettlebells were named what they are, circus strongmen used to perform feats of strength with them before the mainstream caught on. And when they did, it earned its English name in the early 20th century.

Kettlebell training offers a unique variation to the traditional dumbbell and barbell regime. Because of all the various kettlebell exercises, using one weight isn’t uncommon.

Having access to only a few different number of kettlebell weights is perfectly fine. With small weight increments, you’ll be able to bust a sweat and have a muscle-aching workout at the same time.

Unlike dumbbells, kettlebells can be used for a wide range of movements and exercises.

Yes, there are many exercises that you can perform with dumbbells, but not nearly as many movements. Performing a kettlebell swing with a dumbbell just feels plain awkward. And that’s just one of the many kettlebell movements that there are.

Below we’ve listed some common kettlebell exercises that can be used if you’re only getting started or are interested in incorporating kettlebell training into your workout.

Kettlebell training isn’t easy, but once you start seeing the benefits that come along with it, you’ll keep wanting to push yourself and take your training to the next level each and every time. 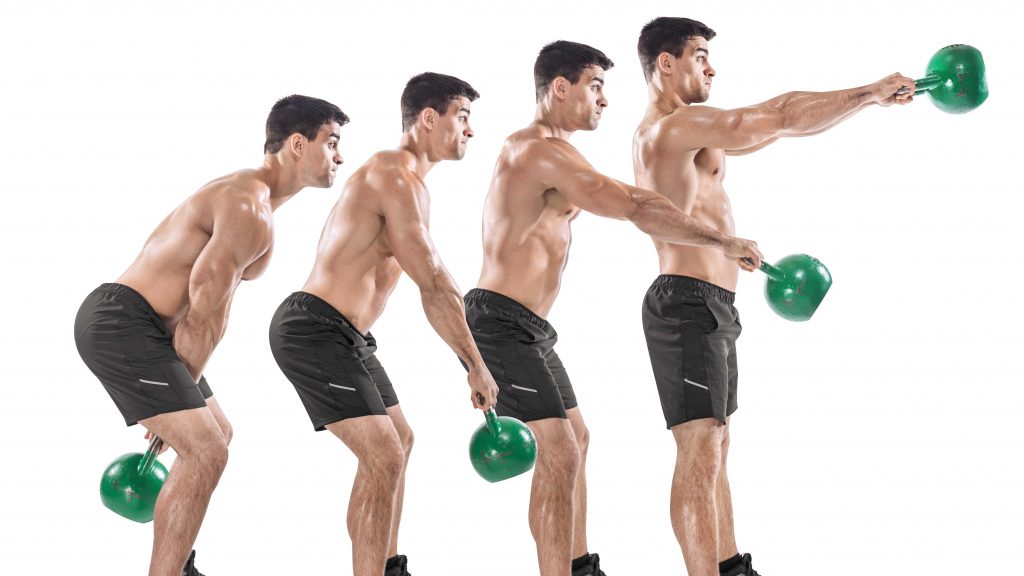 You may not know this but there are two variants to the kettlebell swing; American and Russian.

A Russian kettlebell swing is when the kettlebell is swung from below the groin area to somewhere between the upper abdomen and shoulders. So, pretty much in line with your pecs.

An American kettlebell swing is the same as the Russian swing but instead of stopping at chest-level, you swing the kettlebell into an overhead position.

For the purpose of this article and that it’s aimed at beginners, you should perform Russian swings.

Start by standing with your feet slightly wider than shoulder width while holding the kettlebell with both hands.

Next, drop into a half squat position while dropping your shoulders slightly. In one fluent motion, bring your body into a standing position while swinging the kettlebell up and stopping when it’s in line with your pecs. 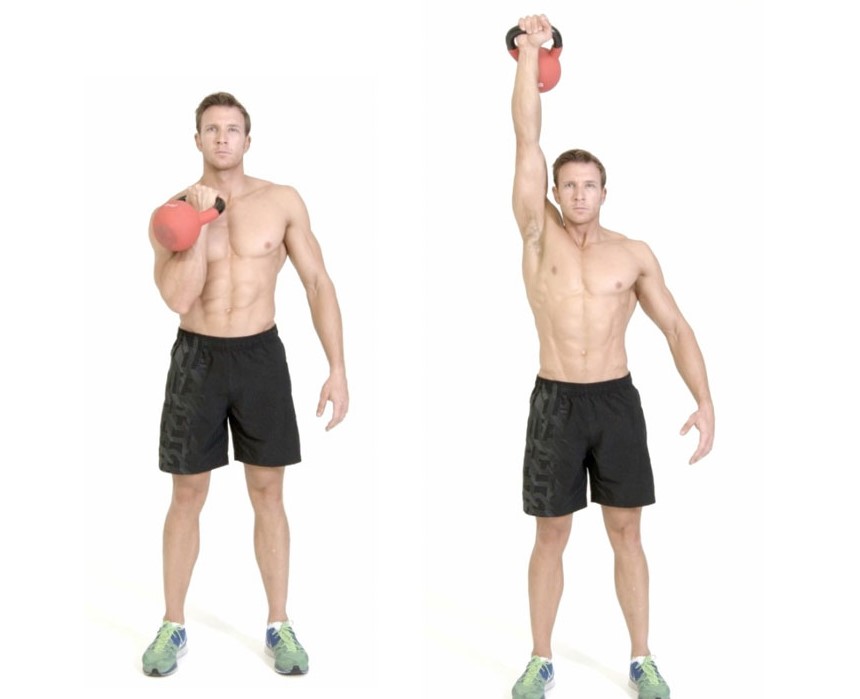 This exercise is very similar to a standard dumbbell shoulder press. However, the strict press is exactly what its name entails – it’s a strict press. No cheating.

When performing a strict press, only one kettlebell will be used at a time.

Start by holding the kettlebell by the handle over your shoulder, allowing the ‘bell’ to rest against back of your wrist. Just like your normal shoulder press, press the kettlebell up into an overhead position.

Lower the kettlebell to the starting position and repeat the process. 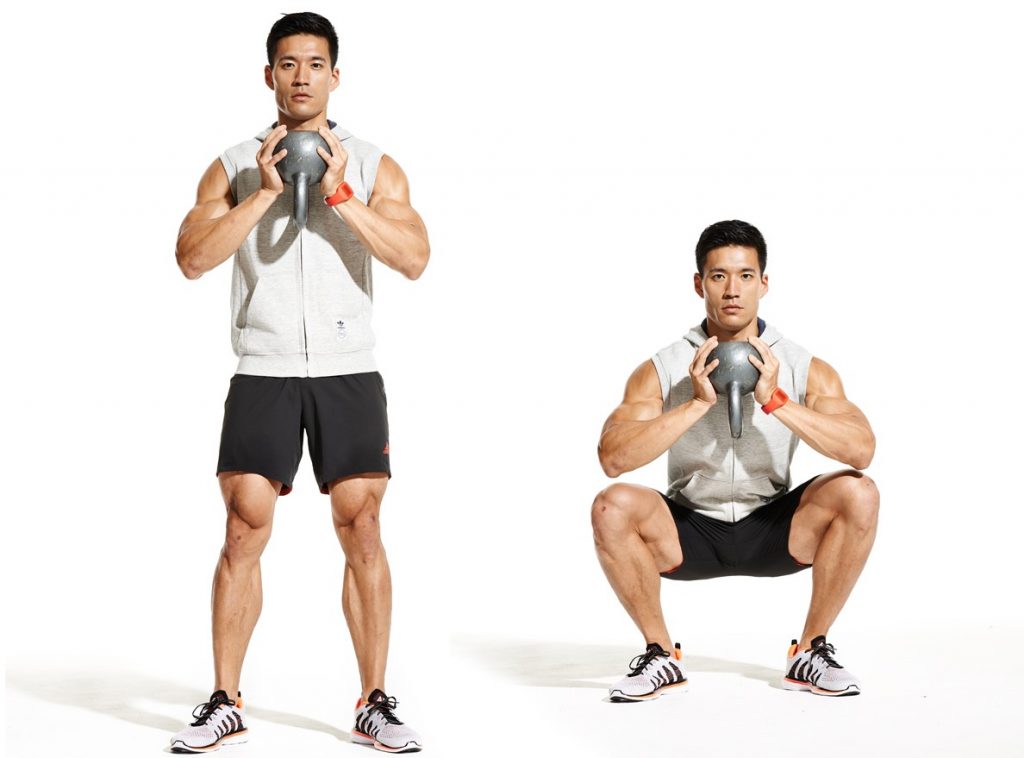 This is a personal favorite of mine, although I only use it to help warm me up for heavy squats.

Apart from me using it as a warm-up, the goblet squat can be a legit intense kettlebell exercise when performed correctly with the right amount of intensity to go with it.

Keep your foot placement the same as you would when performing barbell squats and remember to keep your feet slightly pointed out.

Lower yourself down into a squat while maintaining a rigid back. Go below parallel. Then bring yourself back up into the starting position.

This exercise is great for improving shoulder and tricep mobility.

Start by holding the kettlebell upside down by its horns at shoulder height. Don’t extend your arms out in front of you.

The movement should make a full circle around your head.

This is not to be confused with American or Russian swings. The kettlebell chest swing follows a similar movement to good mornings. Except, instead of having a barbell on your shoulders, you hold a kettlebell against your chest.

Hold the kettlebell against your chest and bend at the hips as though you were performing a good morning. When bending forward, keep your knees slightly bent and your back straight while bracing your core. 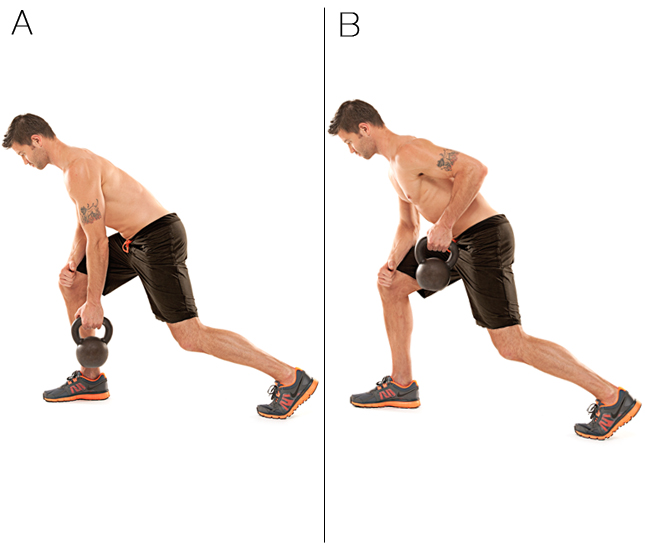 As the name implies, this is a one-arm row, something that nearly all of us are familiar with. Except, this kettlebell exercise won’t be performed while using a bench for support. Instead, you’ll do this exercise without any form of support.

By doing it this way, you’ll be able to call in more stabilizing muscles and put them to work, which in turn will allow you to develop more core strength that will help to boost other lifts like squats and deadlifts.

Start by bending over forward while maintaining a rigid back. Your torso doesn’t need to be parallel to the floor (although, that’s not incorrect either). Your torso can be anywhere between parallel and 45 degrees.

Grab a kettlebell by the handle and perform a row the same as you would a dumbbell row. While pulling the kettlebell up, retract your shoulder blade and pull the kettlebell into your oblique.

This kettlebell exercise is similar to the shoulder halo but with a few changes.

Instead of holding the kettlebell upside down and at shoulder height, you’ll be holding it with one arm, allowing it to hang in front of your body.

If you’re holding the kettlebell in your right hand, move it clockwise around your body and switch hands when the weight is behind you. The kettlebell should now be in your left hand.

Swing the weight around your body from behind to bring it out in front of you. This will count as one rep.

When swing the kettlebell anti-clockwise, just follow the same instructions as above but in the opposite direction.

Kettlebell training can provide a little diversity from your typical, everyday workout routine. If mobility and core strength development are goals that you’re striving for, then switching your training up with kettlebell exercises could be what you need.

If you’re just starting out with kettlebells, be cautious and start light. Kettlebells are quite different to dumbbells and require a little more joint stability.

After you’ve gained the necessary strength to lift heavier, then you’ll also be able to perform more complex movements and kettlebell exercises.

Are 3 Meals A Day Good or Bad for Gains?

How Much Sleep Do You Need for Bodybuilding?