When it comes to getting jacked and strong but still shredded to the bone, contrast training definitely ticks all the boxes.

Popular with elite strength athletes, power performers and anyone else who understands what hard training looks like, contrast training guarantees to ramp up your force production, power output and explosive strength.

It’ll also get you jacked as f*ck too which is never a bad thing.

But get this right. It’s tough. Like, brutally tough. In fact, it’ll beat you up so hard that it’ll get you feeling feel like Chris Brown-era Rihanna.

Fit the contrast training method into your program and the gainz will rain down on you within a matter of days. It’s that effective.

Welcome to the contrast training method…

What is Contrast Training?

Remember back in the old day when you’d crank out basic sets and grow muscle? Yep, those were great times.

But now that you’ve graduated from fresh-faced young pretender to full-on bro, the basic stuff just isn’t working for you anymore. No matter how hard you try, your training just feels stale. And that’s beginning to hit your motivation hard.

You need something new to wake those muscles up and get them growing again.

And we have juts the thing.

Contrast training involves a heavy exercise followed by an explosive one

To a degree, the clue is kind of in the name. This particular training method uses two contrasting exercises to help boost athletic performance.

In simple terms, you choose an exercise that you can load up real heavy. You train to failure and then after a rest period, follow it up with a body weight (or light weight) exercise that focuses on fast, ballistic movements that are all about speed and explosive power.

Rest times between the two exercise are really down to you as an individual. Some lifters prefer 30 seconds and others prefer much longer – as much as 12 minutes.

You aim to complete 5-10 reps of the first exercise, and then as many reps as possible with the second one.

Exercise number one should use a load of around 80-85% of your 1 rep max for the system to work effectively.

You can perform contrast training on practically any muscle group, although bigger ones such as legs, chest, back and shoulders work best.

There’s a little bit of planning involved, but that shouldn’t put you off. The only limiting factor is your knowledge of different exercises.

Here are some basic contrast training supersets that you can try:

Why would you want to punish yourself with this method though?

In the quest for gains, nothing should get in your way.

That includes the searing pain of lactate, the eye-watering feeling of muscle fatigue or the tight-chested lack of oxygen that can only be likened to a face sitting session with Kim Kardashian.

If you use contrast training you’ll be granted with performance riches so bountiful you’d think that Kim actually smothered you to death and you’d arrive at the pearly gates of Gainzville.

Benefits of the contrast training method include:

And that’s just as few examples.

It really is a great system for athletes that want to truly jack up their ability on the field or track. 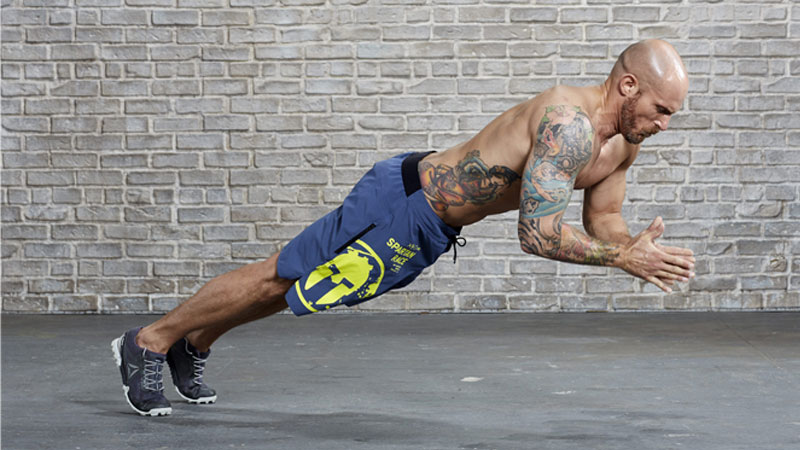 How Does Contrast Training Work?

Contrast training is like the black magic of strength training. It uses pure sorcery to boost muscle performance.

Imagine a Shaman, dancing next to your jacked body while you crush rep after rep of powerful squats as he shakes his skull-topped staff, chanting to the dark spirits of strength and mass.

And it’s all to do with something called post-activation potentiation.

The sweet science of post-activation potentiation

When you lift heavy weights, you engage a maximum number of motor units – the parts of the nervous system that switch muscle fibers on.

If you take a muscle to failure there’s a period in time where your motor units are still triggered. You’re too tired to smash out another heavy set of lifts, but if you take the intensity down (such as with a squat jump or push-up) you can harness this ‘neural drive’ to increase force due to more motor units being active than your muscles need.

PAP refers to a short-term improvement in performance based on maximum motor unit recruitment.

This is why it’s often referred to as the ‘Goldilock’s principle’ – because you’re finding just the right point where fatigue has reduced but motor unit activation is still high.

When you’ve been screaming down the highway at 140 kph or whatever and you then drop down to a 50 zone you notice that things start to feel dead slow. This is because you’ve primed your senses to work overtime. And there’s a period of time when you slow things down that it’ll just feel easier than normal.

That’s kind of what happens with PAP.

Efficiency, productivity and nervous system input is in over-ride.

So the real question of course is why would PAP be beneficial?

That’s why the rest period recommendation is so vague. Because it’s based on optimal performance for you as an individual.

Some lifters find that shorter rest times aren’t long enough to get rid of any fatigue from the first exercise, and performance is poor.

Other find that resting too long results in low motor unit recruitment and less powerful reps.

It’s really down to trial and error.

But f*ck me, get it right and you’ll be throwing out reps with the power of Luke Cage on steroids.

Summary – How Does the Contrast Training Method Work?

If you’re an experienced lifter who wants to boost sports athleticism, or just get jacked in the gym, this is the one for you.

Benefits of the contrast training method: