Being a BJJ white belt is an exciting time for most dudes. Some guys start the journey after years of watching the UFC on a Saturday night. Others stumble on the crazy rolling around in the back room of an iron pumping gym by accident.

Whatever the reason you started, what matters is you’re on the mat. Even if you can’t tie your own belt or know the difference between De La Riva and Spider Guard.

As a white belt though, you can get away with not knowing these things. Ain’t nobody gonna laugh at the new guy. But, that doesn’t mean starting at the bottom can’t suck. We ain’t gonna lie, it can be tough.

Sometimes it’s easy to get lost in the action. If you’re the kind of bro that likes to daydream, you know what we’re talking about. Who doesn’t picture themselves winning the Mundials instead of actually paying attention. Wait, which arm am I grabbing again?

Not only that, but all the higher belts have a whole bag of fancy moves. As a new white belt though, we’ve got a schoolyard headlock and burnt out forearms. Which would be cool if that sh*t actually worked.

Bro, let’s get real for a moment. We’re here to tell you it doesn’t have to be like this. Well, not forever anyway. Follow our advice and you’ll see crazy improvements in your ground game. Just like lifting, BJJ is a lifestyle with it’s own unwritten rules and tricks of the trade.

White belt is the perfect time to pick these things up. As a beginner no body expects amazing stuff from you. It’s cool to mess up, and you can learn from your mistakes every day. If you get tapped out by a 120lb dude, nobody cares. You’re not supposed to win.

This stage is all about levelling the playing field. You’re the underdog, so embrace it. Chill if you can’t flying triangle your instructor. Just concentrate on slowly building a bank of deadly knowledge.

It doesn’t matter whether your a high flying business bro or a jobless gym rat. What counts is you are committed, coach-able and an asset to the academy. Luckily if you’re a nice guy this shouldn’t be too difficult. If you ain’t, maybe just try a little harder bro. Just for BJJ at least.

So, with that out of the way, time for the top tips; 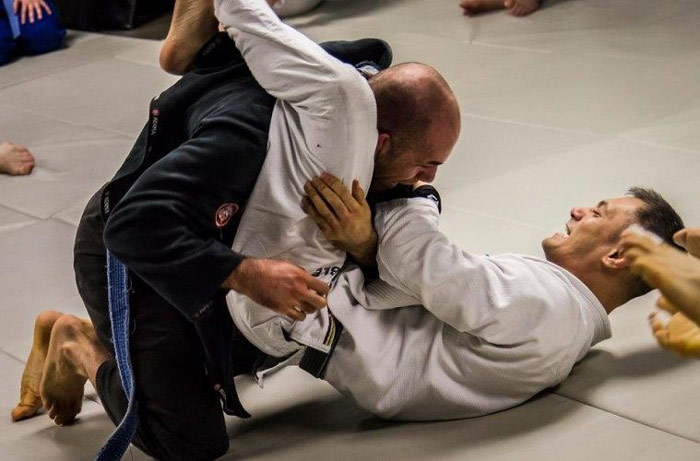 We’ve heard it all before haven’t we? Just focus on the basics. It sounds so simple but you’d be surprised how many dudes dismiss this. Especially if they’re the competitive type looking for an edge.

Building a base knowledge of the basics should be seen as the most important aspect of BJJ. Seriously, we mean it. How are we supposed to pull off awesome subs if we can’t get unstuck from side-mount?

Here’s 6 basic concepts that all white belts should master;

These are the concepts that will save your ass time and time again. Both on the mats, and off them if the situation arises.

If you don’t believe us, you only have to check out the matches of Roger Gracie. The world champion beats the best of ’em with solid basics every time.

Mastering these fundamental movements early ultimately gives you more room to grow. See it like building your own magic formula workout or even a house. Set a solid foundation first, and then add everything else on top.

Imagine trying to hammer curl a 50lb dumbbell if you can’t even handle half the weight without landing of your ass. It just doesn’t doesn’t make sense. But, what does is building a foundation of strength first and gradually working up to it.

By constructing a solid foundation white belts can tag on other pieces of information pretty easily. Eventually a single sweep from closed guard turns to two. Next you start to throw a submission attack onto the end of it.

Once you get to this stage you will begin to develop your own game. Creating a pathway of moves that is signature to your style and way of thinking. Next up, a nice new blue belt. 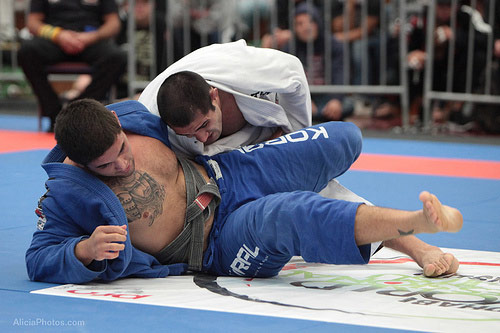 As a white belt you’re going to find yourself stuck in a lot of weird positions you’ve never seen before. Especially if you’re brand new and almost every move is alien to your brain. So, instead of trying to hold on waiting for the buzzer, concentrate on escaping.

These are the main positions you should know how to get out of;

If you don’t know what these scenarios are, don’t stress. A quick YouTube search will provide enough info for you learn how to recognise them on the mat. Master at least one simple escape for each of these and you’ll become a nightmare to control.

Next, focus on closing down any and all spaces for attack. That means keeping your enemies close, but your elbows closer. It might seem like a good idea to reach out during a roll, but this creates attacking opportunities. So, don’t leave limbs hanging around.

In order to live in the jiu jitsu jungle, a dudes gotta learn to survive. That means first forming an impenetrable line of defence. If in doubt, remember to;

Getting tapped quick sucks, but at least then you bump fists and go again. Repeatedly being stuck in a bad position is what will seriously slow you down. Once a bro becomes impossible to hold down, then he becomes dangerous. Kind of like a lion, or some other deadly beast. 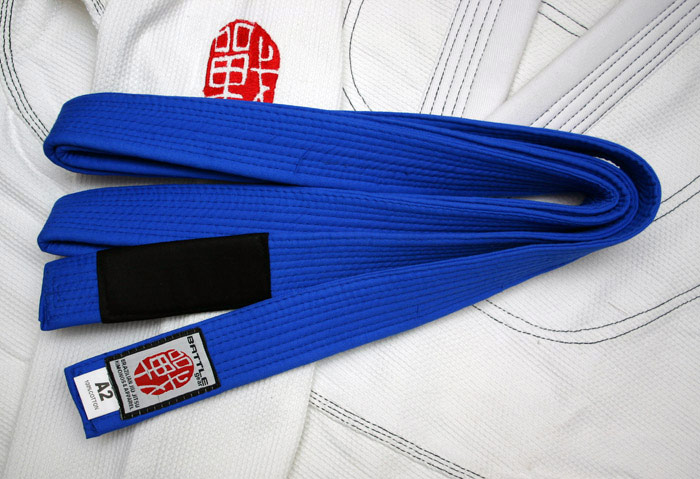 Every white belt has been there. All we can think about is the blue belt being wrapped around our wait. Finally, something that tells the world we kind of know what we’re doing. And with it the inevitable lightning bolt of wisdom that’ll strike us from the BJJ heavens.

If you’re reading this thinking you can relate. Slow your roll, bro. With the average time to black belt being over ten years, there ain’t no rush.

Concentrating too hard on the destination can leave you lacking in the process. Not only that, but it’s a fast track to burnout. Focusing on smaller short term achievements is the most effective way to making big changes.

So, if you want to improve quickly, set yourself a bunch of SMART goals instead. One could be pulling off a triangle choke during live rolling. Another could be preparing for a local tournament.

Just remember to be SMART and keep things;

Setting yourself something to aim for that’s short and sweet will add extra purpose to your training. Hit the mats with a plan of action and before long you’ll be more than just a bro.

You’ll be a blue belt, bro.

Finally, if there’s one thing to take away from all this it’s to not put pressure on yourself. Every killer dude with a black belt was a white belt too.

Nobody was born kicking ass, arm-barring the doctor on the way out of the womb. Not even the baddest man on the planet Mr. Chuck Norris. Who is actually a legit BJJ black belt by the way.

Be humble, stay focused and keep SMART. Oh, and keep those arms in tight bro!

Do try this at home - Killer leg workout