Are overtraining and testosterone levels closely related? Could working too hard in the gym really lead to low androgen levels and a huge dip in performance?

To achieve the greatest physique possible you have to work hard, with no excuses. When push comes to shove you have to break free of tiredness and fatigue and crank out rep after rep to hit the dizzying heights of the bro physique.

The best in the world didn’t sculpt their physiques on half assed workouts when they felt like it. They got deep in the grind and mixed it up on the daily.

Some studies show that when athletes overtrain, their testosterone levels plummet. But others have shown that androgens aren’t a reliable marker of excessive training, especially heavy weight lifting.

In this article we delve deep into the dark place they call overtraining… and answer the question once and for all.

Overtraining is a complex syndrome characterized by a drop in performance, physiological changes and is closely associated with low mood and energy level.

You don’t just ‘fall’ into overtraining. It’s something that happens over a period of time, when training intensity and/or frequency is super high.

Just because you trained 5 times one week instead of your normal 3 doesn’t mean you’re overtraining. It means you’re a pussy for complaining in the first place. Talk to real athletes that train 30 plus hours a week. And then tell us your regime is grueling.

Overtraining can take weeks to months to recover from.

And during that time, your performance is rock bottom – strength, speed, stamina, power. They’re all on their ass.

What makes ‘OT’ hard to measure is that there isn’t one specific diagnostic markers or tool you can use to say that you’re overtraining. You only know you’re in an OT state once performance is shot.

Here are some of the symptoms that have been reported in athletes who were overtrained:

A ‘syndrome’ is a multi-factorial disorder.

What this means is that some symptoms occur in some athletes and not in others. There’s no one single cause or symptom. This makes it more difficult to tell if you’re barreling towards overtraining.

To understand overtraining and testosterone you have to understand how your body reacts to the stimulus of exercise.

When you train in the gym you provide your body with a stimulus. This could be from weight training, cardio, agility training or flexibility for example.

But based around a model called specific adaptation to imposed demands (SAID), your body ONLY adapts in a way that’s specific to that stimulus.

So, if you lift weights your body adapts by growing new protein cells and getting jacked. If you trigger a neural change you get stronger. And if you do loads of cardio your vascular and respiratory systems become more efficient.

In other words, you can expect to get jacked from strength training… but not from a 20 minute session on the recumbent bike.

When you create a stimulus, the body uses ‘adaptive energy’ to help the body adapt. But if you keep hitting it with the same stimulus over and over again without time for your body to recover, it soon tanks.

Recovery is important as it helps you top up your ability to adapt, while reducing the fatigue you accumulate through hard training.

When you add in recovery your body gets rid of fatigue and helps you supercompensate. This is when your performance increases, your muscles get larger and your strength improves.

Without recovery from exercise, you soon reach a point where fatigue is higher than your ability to adapt.

But this doesn’t mean you’re overtraining… not yet anyway. 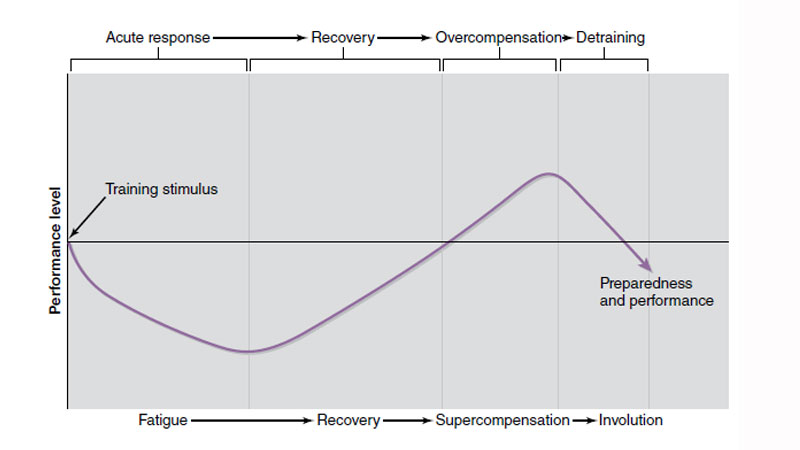 What is overreaching and how does it differ from overtraining?

If you don’t plan your recovery days or you don’t employ regular deloading weeks, you’ll find out fast that your performance starts to drop.

It’s completely normal for your performance to decrease slightly during blocks of training that are tough and challenging.

That’s kind of the purpose.

In fact, the idea of periodization is to train hard and experience a reduction in performance for a few weeks before planning rest and recovery so that it bounces back and improves.

This is referred to as functional overreaching.

It’s functional because it has a purpose (to improve performance), and it’s known as overreaching because you’re literally reaching for a new level of fitness.

If you choose to deload or rest for 3-7 days at this stage you’ll supercompensate like a muthaf*cker. You’re training clever and forcing your body to get better.

Non-functional overreaching is where the problems start…

Even though you’re still training hard you won’t supercompensate any more than you would have if you’d employed recovery at the peak of functional overreaching.

Once you move into a state of non-functional overreaching you’ll notice a real dip in your performance. You won’t be able to lift as heavy, your mass gains will slow down and your fitness levels will drop faster than a hooker’s panties at a millionaire mansion party.

Non-functional overreaching will take you a good couple of weeks to fully recover from… maybe even longer.

And remember, once you’ve recovered you won’t be any fitter than if you’d recovered much earlier in your program.

You’re at a point where performance is getting worse. Your normal bench press weights feel heavy as f*ck and don’t even mention your energy levels.

You’re a broken bitch of a dude that needs a holiday.

100% you’re in a non-functional overreaching phase.

But being the bro that you are, you’re going with CT Fletcher approach to training – “overtraining is a myth”

Bullshit, CT. Becuase it does.

You try to fight through the fatigue. Your performance gets worse and worse and you start to develop severe physiological and psychological side effects.

There’s the weakness, the staleness, lack of drive and motivation and the low mood. You can’t sleep and you’re pretty sure you’re getting ill.

Welcome to the world of overtraining.

What are the measurements of the overtraining syndrome?

Now you’re in a real deep hole of sh*t. Not only is your gym-game poor, but there are a number of physical and psychological symptoms starting to creep into your life.

According to the research, here are the ways that some clinicians diagnose overtraining: 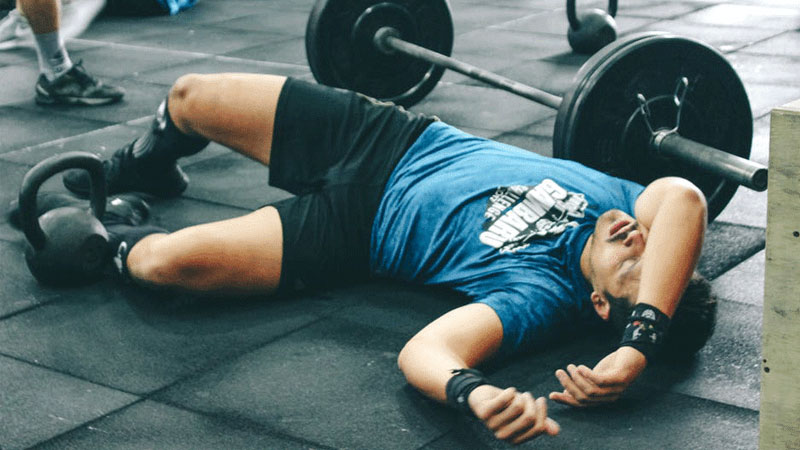 Overtraining takes weeks to months to fully recover from. It’s not just ‘feeling tired’, it’s a multi-factorial syndrome that affects your body and your mind.

Overtraining and testosterone – What Does The Research Say?

In the past, overtraining and testosterone have been closely linked, with some coaches and clinicians using free and total plasma testosterone as a diagnosis tool, especially the ratio between testosterone and cortisol.

In other words, “bro, your test is lower than normal, you’re overtraining”.

And to an extent, that’s true. In athletes who’s performance is on its ass and they’re overtraining for sure, testosterone can be low.

But overtraining and testosterone don’t always go hand in hand.

Here’s what the current research says…

A study back in 1993 was one of the first to highlight the link between overtraining and testosterone levels.

In their research, a group of scientists based at the University of California found that after 3 months of overtraining, testosterone levels had decreased from 8.80 ng.mL to 5.36 ng.mL.

What made matters worse was that cortisol levels (the body’s stress hormone that works directly against testosterone) had increased from 145.7 ng.mL to 215.3 ng.mL.

And just to put the nail in the coffin, sperm count reduced by 43% as well!

Overtraining is associated with low testosterone and feelings of tiredness

A study published in the British Medical Journal found that when 25 high-level rugby players became ‘stale’ from overtraining, there was a clear change in hormone levels, as well as fatigue and tiredness.

The athletes trained for 15 hours per week (which isn’t that high for a pro athlete). The sessions consisted of strength training, HIIT sprint workouts, technical sessions and rugby specific fight training (!).

Throughtout the training block, each athlete completed a questionnaire to highlight their feelings towards the workouts – fatigue, tiredness, mood and so on.

When overtraining was diagnosed, testosterone levels were clearly low.

The authors of the study were so sure that overtraining and testosterone were related that they concluded: “testosterone concentration is influenced by tiredness, and is therefore a valid marker of overtraining”.

There’s hardly any research on bodybuilding and overtraining

If you hack your way through the hundreds of studies on overtraining and testosterone, you’ll find that there’s a glaring missing link…

There’s practically nothing on bodybuilders at all.

You’ll find plenty on endurance athletes, and loads on sports teams. This is because they generally train with a larger weekly training volume and easier to test.

But there are hardly any clinical trial research projects that have looked at how excessive training affects muscle mass or strength in bodybuilders.

However, this is what we know so far…

Your 1RM will probably drop after excessive high-volume weight training

One of the only studies (from way back in 1997) looking at bodybuilding-type training tested athletes after a brutal repeated 1RM workout.

Lifters were asked to complete 10 reps of their 1RM squat each workout, with just 2 minutes rest between sets.

And they did this solid for 2 full, agonizing weeks.

If you understand training you’ll realize just how horrible that is.

And when the lifters failed a lift (which was pretty inevitable) they were only allowed to drop the weight by 4.5 kg before trying again.

Unsurprisingly, the lifters suffered a drop in performance, by around 10-15%.

But here’s the interesting thing regarding overtraining and testosterone…

While high-volume weight training resulted in low testosterone, high intensity lifting did not!

Lifters that completed a higher-volume workout had reductions in testosterone that were similar to those taking part in endurance training… reduced T, elevated cortisol and low mood.

But those that lifted heavy with low volume found that while performance dropped, no changes to hormones occurred at all.

High-volume strength training will lower testosterone levels; but high-intensity might not. 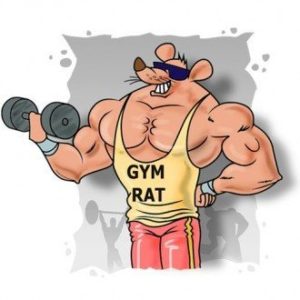 Unsurprisingly, not many bodybuilders are willing to take part in studies where they risk getting smaller.

And neither would we.

It completely tears up the bro code for lifters.

So that only leaves animal studies to rely on (if you get chance to watch rats lifting weights on YouTube, do so… you won’t be disappointed).

And when these gym rats are purposely overtrained, their muscles markers did change.

Scientists identified a change to a range of skeletal muscle markers such as creatine kinase, COX-2, IL-6, TGF-B1 and other weird sounding compounds.

And this showed them that if overtraining continued, muscle mass could have decreased.

Does this mean that your muscles will get smaller if you overtrain?

At this stage, no one knows. Changes in skeletal muscle markers were on a cellular level and more than likely wouldn’t have lead to a “dude, you look smaller!” comment.

But hell if we want to risk it!

Overtraining refers to a decrease in performance that lasts for a few weeks to months.

It is often accompanied by changes to mood, motivation and energy levels.

Research from endurance athletes shows that during overtraining, testosterone levels do decrease. It’s the same with high volume weight lifting too.

If all this talk of T has got you looking to optimize your own, check out:

Deload Week: How to Deload and The Importance of Recovery Week