You’ll be surprised just how long you can retain strength and muscle mass for during detraining bro. But unfortunately, gains don’t last forever…

Have you ever worried that if you take a week or two off training you’ll transform from a solidly strong and lean as f*ck bro into some malnourished string-bean with the muscle mass of an anorexic crack addict?

Of course, you have.

A common concern shared by bros across the iron houses of the world is just how fast muscle mass disappears when you detraining because of illness, laziness and holiday. Even if it’s psychological, a few days away from the gym leaves you feeling week, small and like those DYEL ‘normies’.

So, how long does it take to lose muscle mass? You might be pleasantly surprised once you read this article. So take the day off, grab a protein shake and give this article on detraining a read…

Here’s what you learn bro:

Detraining refers to the loss of fitness, strength and muscle gains after a period away from the gym.

Nothing last forever. Apart from maybe The Rolling Stones or the f*cking Kardashians – those slut bitches will be waddling their giant plastic asses alongside the cockroaches even after the apocalypse finally hits us.

Unfortunately, those precious gains don’t last forever either – especially when detraining. But to fully understand the effect of taking time away from the gym we’ll have to go in raw with the principles of fitness… 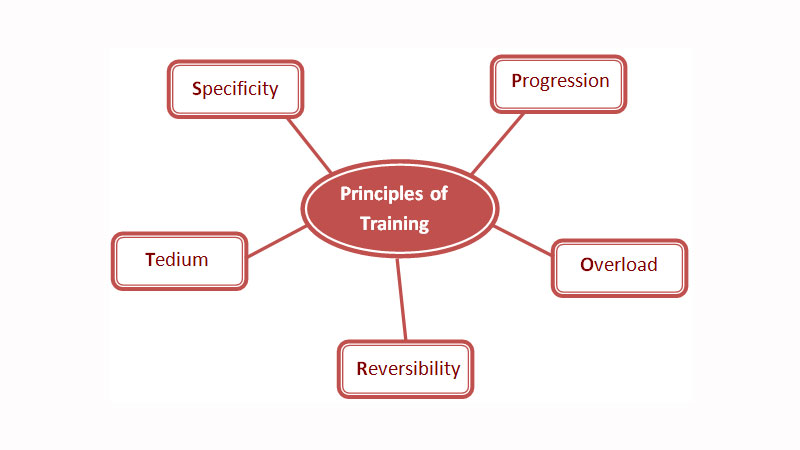 So where’s detraining fit into all of this?

As a bro who understands how to craft out a lean, strong and God damn aesthetic physique you’ll already be following the important principles detailed above.

But there’s another principle that many bros don’t fully understand… reversibility.

What goes up must come down.

You might try your best to train 3-4 times a week or maybe even more if you’re on the run-up to a show or you’re a pro athlete. But eventually, you’ll take a break.

Detraining can occur for a number of reasons.

Maybe because you’re taking a purposeful deload, you get injured, you’re on holiday or you go on a 2-week coke-fueled bender in Mexico with a bunch of hookers named Sapphire, Brandy and Amber and forget where you live let alone where the gym is.

But enough about the SpotMeBro annual party.

Adaptation to exercise uses energy. To build muscle fibers, to grow new neural connections or to strengthen bone tissue means your body’s using stores of energy it’d rather not tap into. It’s necessary during periods of heavy exercise… but once you stop, your body sees expertly-crafted gains as being a waste of resources and is happy to get rid of them.

Homeostasis is the finely tuned balance that your body likes to work within. As a vessel of blood, muscle, and bone, your body would prefer to use just enough energy to help you survive. And nothing more.

So what does that mean? Once you stop training your body will slowly begin to return to normal. You’d better believe homeostasis will rob you of your gains… eventually.

Just the tip: Your body adapts to the specific stimulus you place upon it during training. But stop working out and eventually, your body will use homeostasis to return to its most convenient state… one with no gains.

How Long Does It Take to Lose Strength During Detraining?

The arch nemesis of the bodybuilder is strength and muscle loss. You’d do anything to preserve lean mass during a break from training – and rightly so.

As you can imagine, there’s not much research out there on non-lifters. One because it’s hard to recruit sedentary adults to train hard for a few weeks to assess the effects of detraining. And secondly, because they don’t even lift and therefore aren’t important in our world.

However, noob research does give you an idea of how mere mortals differ to bros when it comes to muscle loss.

Research shows that beginners lose strength at around 3 weeks. One study reported that after 4 weeks away from strength training, a group of beginner lifters started to see a drop in 1RM strength, and were significantly weaker after 6 weeks of detraining.

That’s probably because they hadn’t actually built much strength at that point though, so the need to achieve homeostatic balance quickly probably wasn’t an issue. Less gains = less to lose.

Just the tip: Untrained beginners to lifting will retain strength for 2-3 weeks during complete detraining.

What about detraining in highly trained athletes? Well, according to the research you’ll retain strength that little bit longer

Like we said earlier in this article, at some point you’ll need to deload, reduce training fatigue, and recover from constantly beating yourself up in the gym – no matter how much you don’t want to.

There’s a lot of research into detraining using advanced weightlifters. After all, it’s a prime group of people to study as they’re much more likely to overtrain compared to weekend warriors who pretend to train hard while sat there in their sh*tty leather training gloves and ergonomic water bottles full of BCAAs.

Here’s something quite surprising… a huge meta-analysis of nearly 30 studies found that full-on gym rats and athletes lose strength at around 3 weeks. And that strength continues to decrease right up to 16 weeks (presumably where it then returns to pre-lifting status).

Another research paper found that strength stays high for 4 weeks.

But there’s more to that story…

That same research showed that while strength stayed around, eccentric strength and power suffered just that little bit sooner – tapering off around a week earlier. 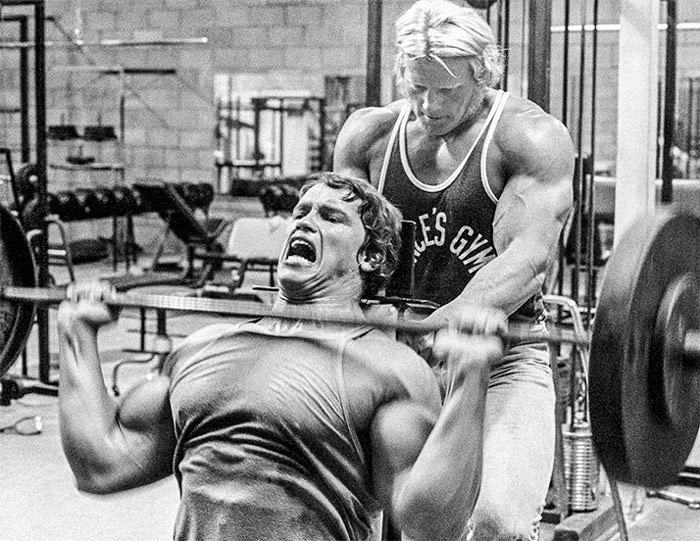 Just the tip: Full on bros can take 2-3 weeks off training without needing to worry about losing strength, force production or power.

Detraining and Gains: How Long Does It Take to Lose Muscle Mass? 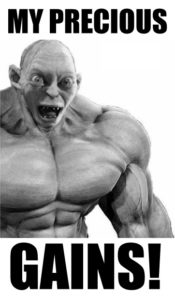 Losing strength is one thing. When you’re weaker you can no longer wait until the gym hits maximum saturation of honies before you treat them to your triple body weight deadlift show.

You wear your muscle mass like a badge of honor though – a suit of armor that shows your alpha prowess and masculine power all wrapped up in a series of vascular slabs of meaty power.

Detraining and muscle mass – are you losing muscle or just glycogen?

Strength is pretty easy to measure. Give someone a 1RM squat or bench press, maybe jump them on an isokinetic dynamometer if you’re a nerd and you’ve got access to some fancy lab equipment.

If the force produced (or load lifted) is lower than before, you’ve lost strength… it’s that simple.

Muscle mass is harder to quantify though.

Are you talking about noticeable, visual muscle loss in the mirror?

Is it more about a decrease in circumference?

And finally, how do you distinguish muscle loss from a decrease in water or glycogen which doesn’t affect your muscle fibers in terms of actual muscle loss, but still makes you look smaller?

Currently, the research shows that muscle loss begins to occur somewhere between 3-6 weeks.

But glycogen loss occurs in a day or two. 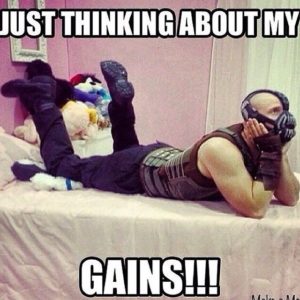 There are only a small number of studies that have factored in things like loss of mass due to glycogen content. One of those studies – based in South Australia – reported that over a 3-week period, a bunch of trained dudes didn’t experience any muscle loss at all – but did lose muscle glycogen, making them appear smaller.

A big carby meal later and no doubt they’ll have been looking their usual jacked selves.

Another recent study found that when experienced bros detrained for 2 weeks they reported no muscle loss at all, suggesting a couple of weeks off training won’t lead to you losing your gains.

Just the tip: Muscle loss can occur within 3-6 weeks of detraining. But it’s hard to distinguish the difference between actual muscle loss and just decreases in glycogen though.

How to Preserve Muscle Mass and Strength During Detraining

We all need a week off every now and then. It washes away the fatigue that’s built up over the previous phase of workouts and helps you feel refreshed and motivated once again. It’s a completely normal part of the training cycle and at the forefront of training paradigms such as periodization.

You’ll be pleased to know that there are things you can put in place to keep your physique bulletproof while detraining.

Here are the main ones you need to know…

Detraining doesn’t mean you can get lazy with your nutrition plan. Maintaining a high amount of calories from protein helps to keep muscle cells topped up. It essentially boosts net protein synthesis, even without the anabolic trigger of strength training.

Various studies have shown that you retain more muscle mass during cutting diets, complete rest and detraining, by following a high protein diet.

It helps to feed your muscle and keep you in that beautiful state we call anabolism.

Bro Tip: Shoot for around 0.7-1 gram of protein per lb of body weight to maintain mass.

When you’re on a weight cut, slashing your carb intake is a nice and easy(ish) way of achieving a calorie deficit. The rapid loss of glycogen also helps to bring out some shape and trim the water off your frame too.

But low levels of glycogen per area of dry muscle mass will make you look smaller. And when the psychology of looking tiny hits you full force in the face, it can be a hard blow to take.

High carb meals during detraining not only help with recovery, but keep your mass looking full to the brim too.

Bed rest or general loss of mobility accelerates muscle loss. You ever had a cast on your broken arm for a few weeks and when it was removed, didn’t recognize the withery, puny lump of a limb staring back at you?

Complete lack of movement speeds up muscle atrophy. So just make sure you add in some low level physical activity such as walking and swimming to keep ticking over.

Detraining is simply when you choose (or have to because of injury or illness) to take time away from the gym.

Ultimately, everyone is an individual. But research shows both strength and muscle mass remain similar for at least 2 weeks into a detraining period… with a gradual decrease kicking in from roughly 3 week onward.

Ready to detrain your brain? No, of course not… so read these next?