Wanting to reveal your abs while getting off? See which sex positions are best to practice with your partner or one-night-stand to burn the most calories and get shredded.

Let’s face it, brah. Many people do stupid things to try and get their end off with hot chicks…it’s just what bros do.

Sometimes it can rule your life, but what if you could use sex as a tool to achieve the rock-hard body you’ve always wanted?

Well, we have some good news for you; a clinical study has found that getting freaky naughty can burn more calories than you think.

We always provide information for every bro. So we’ll explain how fat loss happens to those unaware of things like TDEE and calorie expenditure.

This is an acronym for ‘Total Daily Energy Expenditure’. It’s the overall amount of calories you burn throughout the day, taking into consideration things like; existing, walking, working out, masturbating…you get the idea, brah [1].

Ultimately, it all comes down to ‘calories in vs calories out’.

Feel free to skip this section instead of being a lil’ b*tch and complaining that you know everything in our comments section.

Anyway, all you need to know is you can measure food consumption in calorie intake; each chicken breast etc has a calorie amount, which will add-up towards your total calorie intake.

As we mentioned, it’s important to know your TDEE, so you can keep an eye on how many calories you consume. If you consume over your TDEE, then you need to burn calories (by working out etc) in order to lose body fat and weight.

So without going into any scientific stuff that you don’t need to know, that’s everything in a nutshell, bro.

Now let’s return to the more important topic of sex… 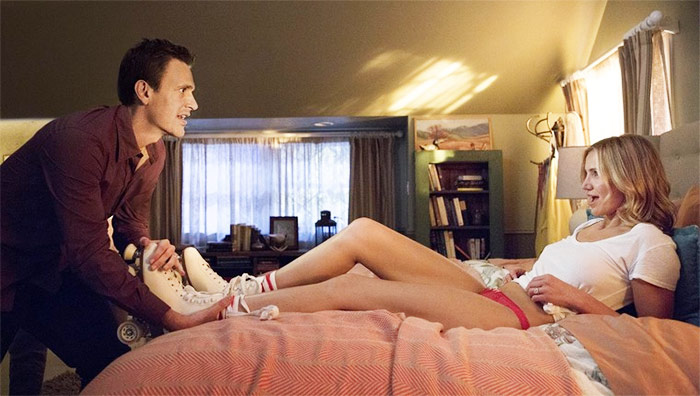 How Many Calories Does Sex Burn?

We apologise that none of us have worn any fitbit’s to measure how many calories we’ve burned. So don’t expect any SpotMeBro sex tape leaks in the future.

Check out the study below:

Julie Frapper…no, not ‘fapper’ you d*ck…et al.,[2] aimed to determine how many calories men and women burned while doing the dirty-deed.

The human subjects consisted of 21 heterosexual couples aged between 22-28 years old; they were asked to wear a ‘mini SenseWear armband’ while having sex, in order to measure their energy expenditure.

The results showed that men generally burn more calories during intercourse, at an average rate of 101kcal (4.2kcal per minute) per session. Women might not be as happy, as their average energy expenditure was around 69kcal per session.

So for those skimming through this article, bros burn around 101kcal every time they have sex. If you’re pumping away vigorously and really going for gold, then you might even burn more.

Sex compared to running on treadmill

Frapper et al found that the men burned an average of 276kcal and women burned 213kcal per 30 mins on the treadmill.

As a result, unfortunately, running on the treadmill burns more than double the calories of having sex.

But still, 101kcal per sex session isn’t bad. That’s like a half a candy bar, bro…and sex is much more enjoyable than running on a treadmill.

You can see a graph of the sex/treadmill comparison below: 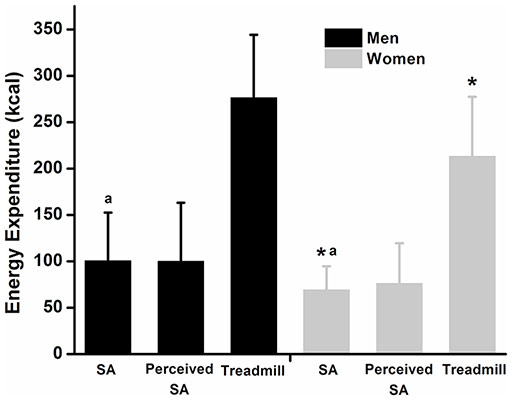 We couldn’t actually find an official study that analyzed the different types of sex positions in relation to calories burned.

So with that in mind, we’ve given a lot of consideration into which sex positions would burn the most calories and promote fat loss. 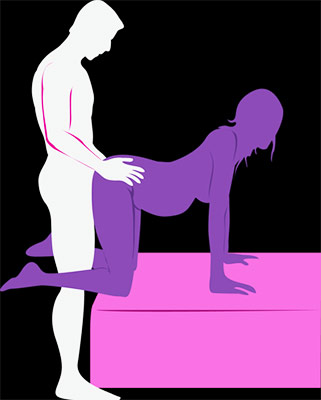 For a guy, this is where the trophies and medals are earned. You might work all-day to put food on the table, but no other sex position will make you sweat as much as doggy-style.

If you pump away vigorously, it’ll be quite similar to a hip-thrusting HIIT workout! So for those looking to burn the most calories during sex, this is the best way forward.

We’re not sure of an exact figure, but a HIIT sex session might even result in an ‘afterburn’ effect (where your metabolic rate is raised up to 24 hours afterwards) [3] .

To benefit from this, sprint-pump for 60 seconds, then take 10-20 second intervals – rinse and repeat for a total period of around 30 minutes.

Or you could just try and sprint-pump for 30 minutes, which would burn a respectable amount of calories too, although steady-state-cardio doesn’t result in the ‘afterburn’ effect.

‘Girl On The Shelf’ 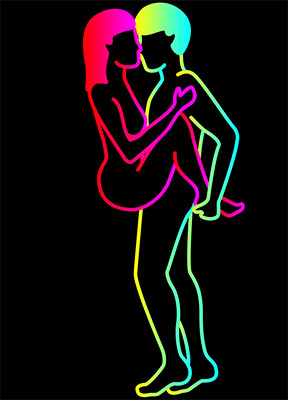 If you’re unsure about what this position is, take a look at the ‘safe for work’ image above.

You can rest the girl on a shelf and get busy. Or to burn even more calories, you could hold the girl in the air for the duration of the session – this might actually promote muscle-protein synthesis (gains) and be classed as a resistance-exercise brah.

Again, you can go for the ‘HIIT’ option and pump for 60 second sprints, while resting for 10-20 seconds in-between. Otherwise, simply go-to-town for as long as possible to burn as many calories as possible. 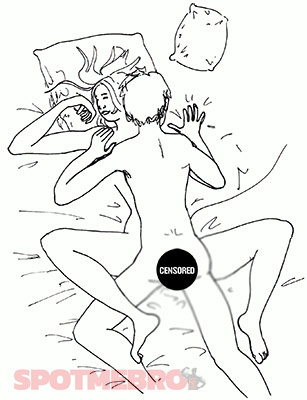 Ah, the classic missionary. Like the reliable Toyota pick-up truck that never seems to break, the missionary position will always be a safe option for couples.

We have to point out that missionary comes with less risk of penile fracture than doggy style (we expand on this in the next section), so it really is a safe option.

Most importantly, bros will still be doing the work in this position – giving you more chance of burning more calories.

The same rules apply; you can try out a HIIT method, or go for the sprint from start-to-finish. 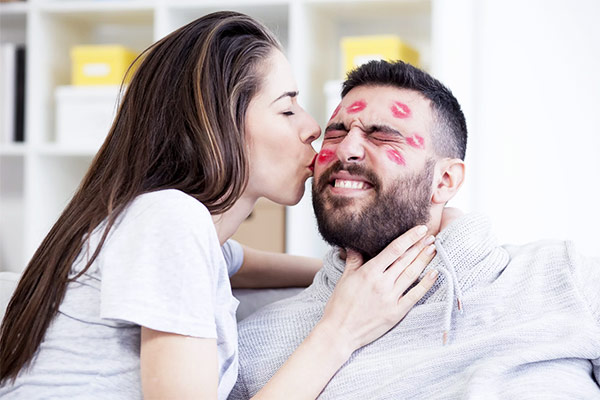 This isn’t a sex position, but it might pay-off to kiss for the duration of your sex session.

Why? Because Jaiya Kinzbach (a sexologist) believes that kissing can actually help burn up to 90 calories per session.

Although there’s no clinical studies to reinforce this theory, it can’t hurt to at least try and burn more calories.

“If the kissing is vigorous and involves some petting, it could be even closer to 90 calories burned in an hour.”

Here at SpotMeBro, we’re always trying to look after our readers. Running and cycling can cause numerous injuries if you’re not careful. And sex is no different.

So we’ve decided to help you stay safe by showing you the positions most likely to cause injury.

In an official case study, Barros et al.,[3] wanted to find which sexual positions were most dangerous (in terms of risk of penile fracture).

90 patients with penile fracture were analyzed throughout this study. The severity of injury and sexual position during time of injury were key factors during assessment.

Barros et al found that there were 6 popular positions for all injuries; masterbation, missionary, doggy-style, cowgirl, blunt trauma and ‘rolling over’ fracture.

The results showed that doggy-style was the most dangerous sex position with regards to risk of penile fracture. The missionary position was ranked in second place, with cowgirl trailing in 3rd place.

So while pumping away in doggy-style might give you the best chance of burning a respectable amount of calories, it also increases your risk of penile fracture too.

Instead of lying to you like other websites, we’ll be honest. Sex isn’t going to burn more calories than walking 1 mile or running on the treadmill.

The case study by Frapper et al [1] concluded that the average sex session for men burns around 101 calories (with each session lasting around 30 minutes in this study).

To put that into perspective, that means you’ll burn the equivalent to half of 1 candy bar per session. So it’s not great when it comes to promoting fat loss.

However, taking into consideration that no-one looks forward to running on the treadmill – while everyone craves sex in their life – burning those 101 calories don’t seem like a bad option.

In terms of sex positions, it makes sense that doggy-style would be allow bros to work hard and burn more calories. But this comes with increased risk of penile fractures…so maybe pumping vigorously in missionary is the safest option…

Just remember to go for the ‘HIIT Standing Doggy Style’ position…and try and last for more than 30 seconds.

How To Lose Thigh Fat