When it comes to sheer power not many combat sports athletes even come close to Brock Lesnar. He’s a jacked up 6′ 3″ 265 lb wrecking machine of pure American muscle.

When he fights the entire arena shakes. Crowds erupt and steel rigging rattles as he slams his defenseless opponents into the octagon floor. His fists fall like sledgehammers, due to decades of forging inhuman size, strength, and power, for his body.

From his humble beginnings, Brock was always scheduled for greatness. His imposing physique coupled with a die-hard work ethic made him a natural athlete. No one could stand in his way.

Before becoming the megastar he is today, he would wake before dawn to fulfill his daily duties on the farm. From a young age, he knew that dedication and immeasurable hard work paved the road to success. It was inevitably his future to become a champion.

From Farm Boy to Poster Boy 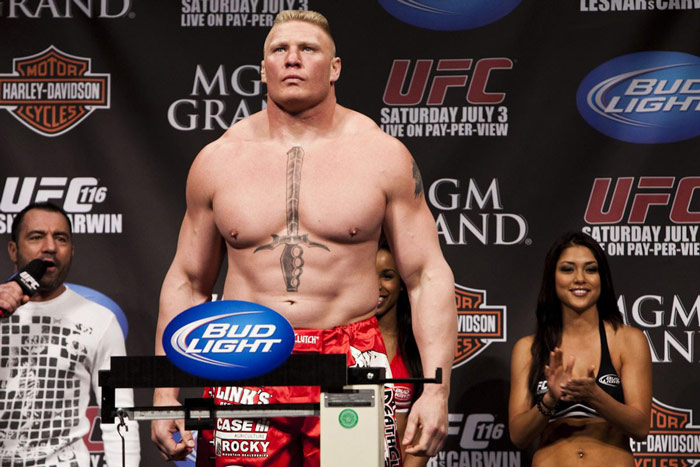 In his life, Brock Lesnar has reached an elite level in multiple sports. As an amateur wrestler, he became NCAA champion in the year 2000, before becoming a superstar within the WWE. To date, there isn’t a man or woman alive who can better his professional wrestling legacy.

However, the taste for glory and top-level competition didn’t end with the ring. In 2004 Brock embarked on a stint in the NFL after shocking officials during the draft. He was ultimately offered a position with the Minnesota Vikings and took a chance at dominating the gridiron.

Proving himself to be such a physically dominating specimen with a ferocious attitude, Brock finally moved to a much more extreme arena. In 2008 he would enter the octagon for the first time to compete in the Ultimate Fighting Championship.

It wouldn’t take long before Lesnar became the colossal poster boy of the promotion. His sheer brutality and unheard of athleticism for a heavyweight sent PPV purchases through the roof. Simply put, when Brock fights, the whole world watches! 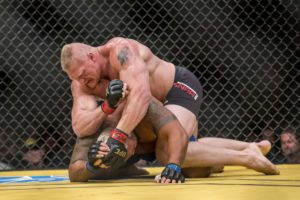 Brock Lesnar stands at a towering 6′ 3″ and weighs in at a terrifying 265 lb. But, the most imposing of all his qualities is his gorilla-like strength and atomic bomb power.

He clears the octagon floor faster than a man half his size, before driving into his opponents like a runaway train. Excellent genetics no doubt play a part in his freak athleticism.

But not one person on this planet can deny that the farm boy work ethic he learned as a young man hasn’t taken him to the next level. All those hard hours spent shedding blood, sweat, and tears, in the training room, has built Brock the body of an armored truck.

Brock knows his advantages and consistently works to take his strength and power to the next level. He understands that to become the best he has to embrace the burn of bending the bar.

Only then can he develop the punishing power to pummel his opponents into the canvas. 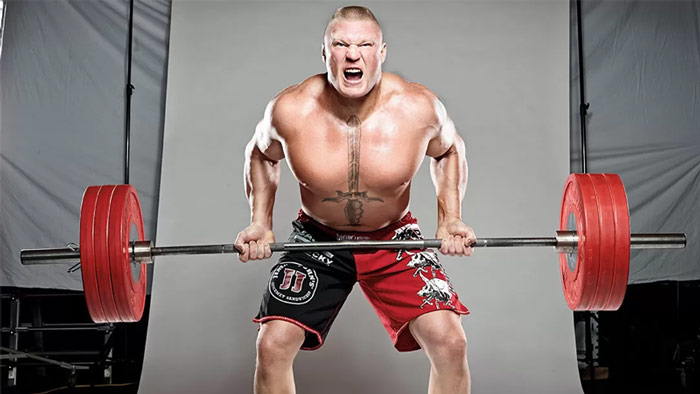 What follows is a full-body workout routine inspired by Brock’s own training. Our team has gathered evidence of Lesnar’s most effective ass-kicking exercises so you can train just like him.

Every move is included for pure power and/or strength development. Hit everything at near max velocity to build double-barrelled explosiveness like the former champion.

Brocks fighting style is primal, and so are his training methods. He goes big, lifts heavy, and pushes himself to his absolute limit. This workout is designed to put you in the mind of an elite level wrestler consistently pursuing greatness.

When completing this routine yourself make sure the weights are set specific to you. If the rep range says 10, then that’s what you should be hitting. If the load is correct, 9 should feel close to maximum and 11 should feel almost impossible.

Time to embrace the grind! 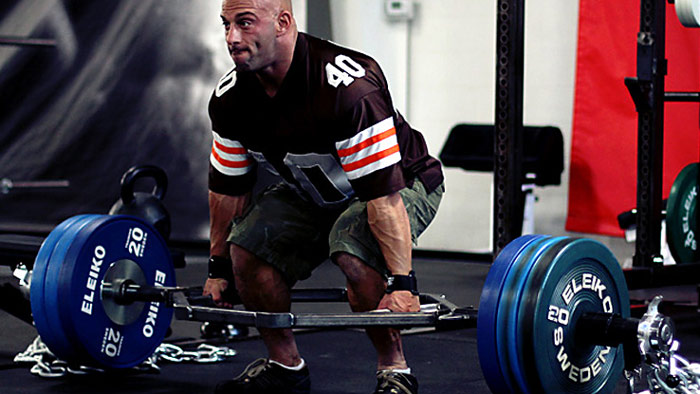 To take your deadlift to the next level check out this guide. 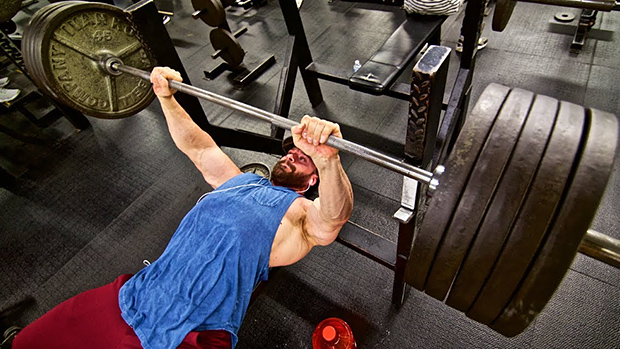 For a more detailed guide to performing a killer bench check out this breakdown.

Exercise 2b. Bent Over Row (Superset) 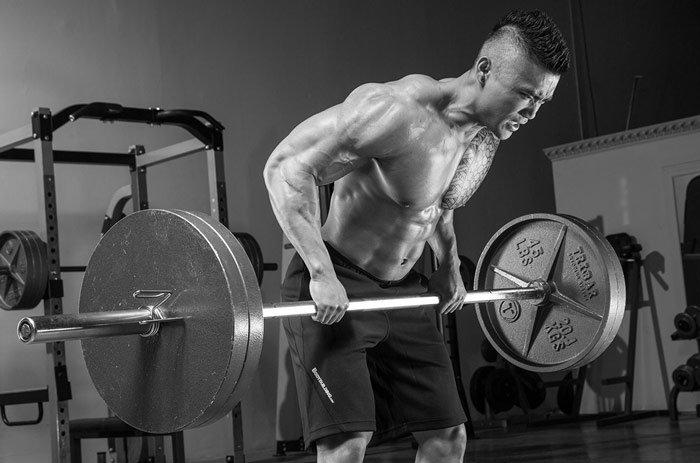 Bro tip: This superset will push your muscles to their limit and replicate the realistic push/pull of a fight. Put together a second bar and keep it close by so you don’t waste valuable time between exercises. 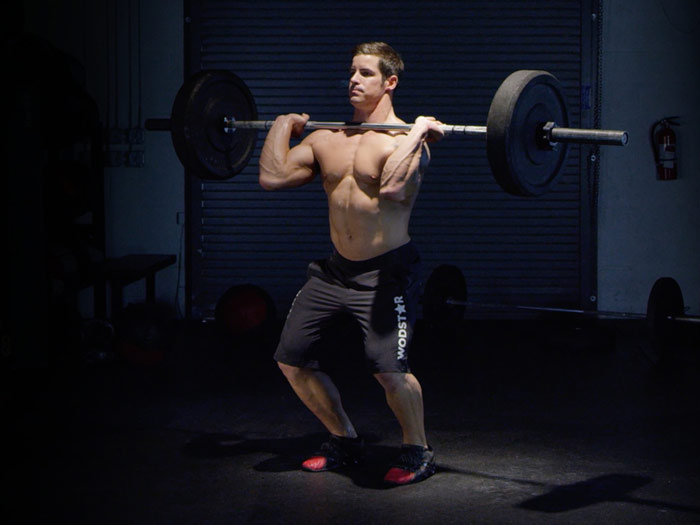 Bro tip: Keep a straight spine throughout the movement, but try to make your back angle more vertical than horizontal if possible. This will put the most pressure forward through the prowler and not downwards into the floor. Therefore, the exercise will better simulate a powerful double-leg drive! 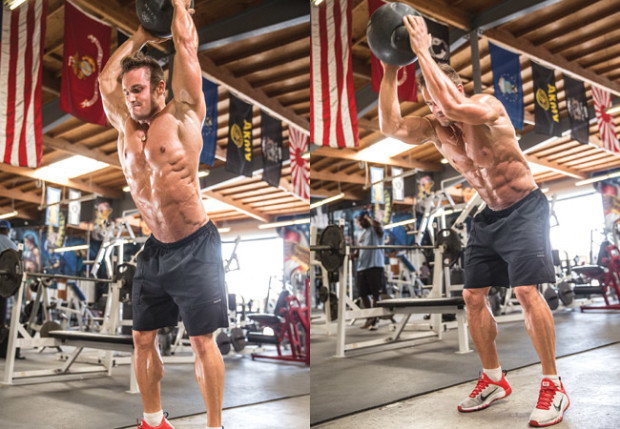 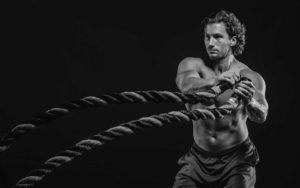 Ready for one final championship round? Try this solid core conditioning drill. Work for 30 seconds and then rest for the same time again. One whole minute counts as a single round, so complete four for the full effect.

Go all out for ultimate fight camp conditioning! 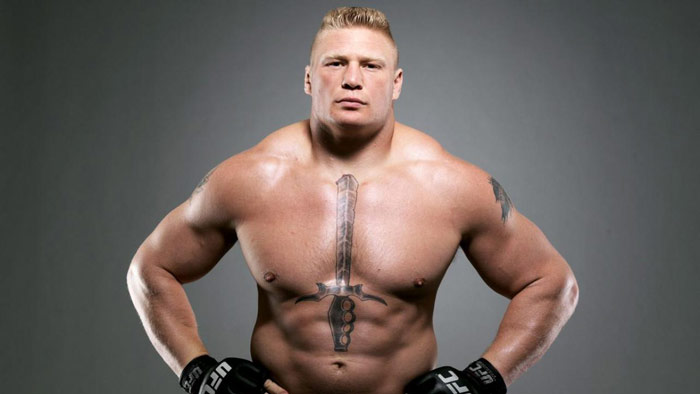 Aside from purely strength and conditioning, Lesnar spends a great amount of time perfecting his fighting skills. When getting ready for a fight he trains in Wrestling, Boxing, Muay Thai and Brazilian Jiu Jitsu, so nothing takes him by surprise.

He then blends these disciplines together into his unique of style MMA. If you want to fight like Brock then focus on using wrestling to set up heavy shots and control on the ground. The former champion swarms his opponents before smothering them with ground strikes. 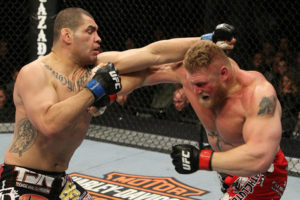 As we talked about first-thing, it’s the NCAA champ’s immense speed and power that puts him in these positions. So when you’re hitting this workout bear in mind you’re training for strength and power.

Don’t half-ass any exercise because that’s not how true power is developed. Move fast, explode and deliver with fight-ending intention. That doesn’t mean be reckless and sacrifice technique for speed, no way bro! Stay strong and healthy out there, but push yourself!

Finally, make sure to employ the Brock Lesnar attitude. Hard work first, everything else second. Because without that drive and desire nobody can become great. So if you feel like dropping the bar channel your inner champ and keep going!

If you’re feeling inspired to take your training to the next level, check out:

Good vs. Bad Genetics in Bodybuilding: Which Do You Have?